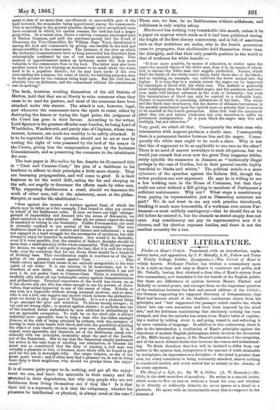 Fischer on Kant's Critick. Translated, with an introduction, expla- natory notes, and appendices, by J. P. Mahaffy, A.M., Fellow and Tutor of Trinity College, Dublin. (Longmans.)—The Critick of Kant is widely known. Professor Fischer has written a commentary upon it in a style as clear and easy as Kant's is cumbrous and prolix, and Mr. Mahaffy, having first obtained a clear idea of K.ant's system from this commentary, now translates it for the benefit of the English public. But there are differences of opinion between Messrs. Fischer and Mahaffy on several points, and amongst them on the important question of the variations between the first and second editions of the Critick ; the German supporting tho supposed discovery of Sohopenhauer, that Kant had become afraid of the idealistic conclusions drawn from his principles, and "had suppressed the passages which resolve the whole object into our own sensations and their form imposed by the mind also," and the Irishman maintaining that absolutely nothing has been changed, and that the mistake has arisen from Kant's habit of explain- ing a matter by talking about it, and going round it, and enforcing it by mere variation of language. In addition to this controversy, there is also in the introduction a vindication of Kant's principles against the objections of modern English philosophers which involves the discussion of Mr. Mill's theory of space, of Mr. Mansel's reduction of the categories, and of the much debated distinction between the reason and understand- ing. We think therefore that few will be inclined to differ from our author in the opinion that, irrespective of the amount of truth attainable by metaphysic, its importance as a discipline of the mind is greater than ever, for every conclusion is being constantly attacked, almost nothing is considered settled, and every author has to submit to the elawhus of an acute opponent.