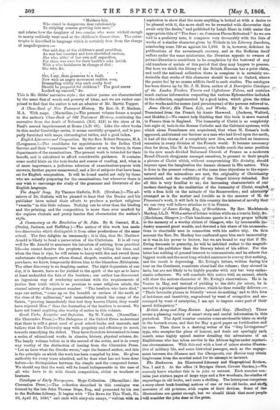 A Commentary on the Revelation of St. John. By S.

(Seeley, Jackson, and Halallay.)—The author of this work has made two discoveries which distinguish it from other productions:of the same school. The first delights us immensely ; it is this, that Mr. Matthew Arnold is likely to head a persecution of the Christians. It is all very well for Mr. Arnold to announce his intention of retiring from practical life—he cannot deceive the prophets ; he is only biding his time, and When the time is ripe, he will return to harry with fire and sword those unfortunate shopkeepers whose dismal chapels, vestries, and meat sup- pers have, we know, temporarily driven him to the blameless 2Ethiopians. The other discovery is no laughing matter. The rigid dogmatists of our day, it is known, have so far yielded to the spirit of the age as to leave at least undecided the fate of the heathen ; our author has discovered an ingenious way of rendering accordant with the requirements of justice that truth which is so precious to some religious minds, the eternal misery of the greatest number. "The heathen who have died," says our author, " come up on the breadth or surface of the earth at the close of the millenium," and immediately attack the camp of the Saints, "proving immediately that had they known Christ, they would have rejected Him ;" thus the damnation of the heathen is secured. We have not found anything else worthy of notice in this volume.