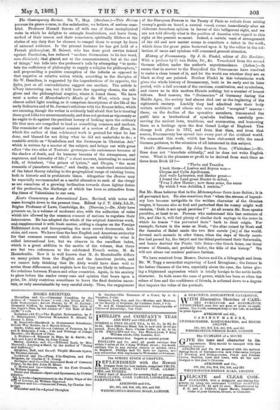 Ovid's Metamorphoses. By John Benson Rose. (Whittaker.)--Mr. Rose does not

" translate critically," and be does not write English verse. What is the pleasure or profit to be derived from such linos as.

these from Book la "Theba and Tenedos I took them—I Lesbos and Scyros won- Chrysa, and Cylla Apollonean,

And walls Lyrnesian, and Hector great—

I found the hand great Hector to defeat, 'Twas I slew Hector ; now these arms, the same By which I won Achilles, I reclaim."

But Mr. Rose believes that in the Metamorphoses there isno fiction; it is- all perverted fact. He also considers that "when-the stream of legend- ary lore became nweigable in the written character of the Grecian. tongue, it became also so foul and perturbed that its eatery might well exclaim, • Doth it not speak parables ?' " At WI events Mr. Rose speaks parables, at least to us. Persons who understand this last sentence of his, and like it, will find plenty of similar dark sayings in the notes in which he traces " the perverted facts " back to their origin. 'For example, Saturn is the same. as Noah, "the. altar raised by Noah and the tumulus of Babel made the two first =cults [sicJ of the world. Around such mounds in after times, when the days of bloody sacri- fice had passed by, the Satyri and the Sileni performed their Saturnalia, and hence derived the Politic title Soter—the Greek Soter, our Sotor- stones of Stennis, and probably Soder, the title of the bishop." We will not abuse our readers' patience further.