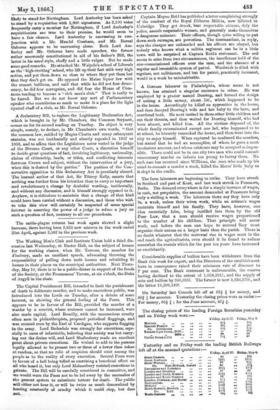 Page 3, 5 May 1866 — The Capital Punishment Bill, intended to limit the punishment of
Close

The Capital Punishment Bill, intended to limit the punishment of

death to deliberate murder, and to make executions public, was introduced into the Lords on Tuesday, after a debate of some interest, as showing the general feeling of the Peers. This -appears to be in favour of the Bill, provided the murder of a -warder by a convict, whose sentence cannot be increased, were also made capital. Lord Romilly, with the unconscious cruelty -often seen in philanthropists, proposed periodical floggings, and was scouted even by the Earl of Cardigan, who supports flogging in the army. Lord Redesdale was strongly for executions, espe- cially in cases of infanticide, believing that society was but carry- ing out the divine will, and Lord Shaftesbury made an excellent point about private executions. He wished to add to the persons legally allowed to be present two or three of a lower class taken at random, so that no relic of suspicion should exist among the people as to the reality of every execution. Several Peers were in favour of a bell being. tolled as exercising a beneficial effect on all who heard it, but only Lord Mahnesbury resisted executions in private. The Bill will be carefully considered in committee, and we would warn the Peers not to be led away by the anomalies of the present system to substitute torture for death. The public will either not hear it, or will be twice as much demoralized by hearing constantly of cruelty which it could stop, but does .not.