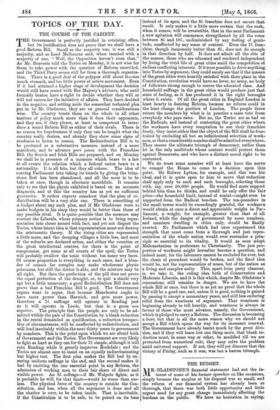 THE COURSE OF THE CABINET.

We do trust some member will at least have the nerve to compel the House to come to a decision upon this point. Sir Bulwer Lytton, for example, said this was his ideal, and it is quite open to him to move that reduction shall apply only to such and such boroughs, selecting those with, say, over 50,000 people. He would find more support behind him than he thinks, and could he only offer the fair price—the household limit, instead of rental—might even be supported from the Radical benches. The ten-pounders in the small towns would be exceedingly grateful, the workmen would obtain at once a direct and appreciable weight in Par - liament, a weight, for example, greater than that of all Ireland, while the danger of government by mere numbers, and numbers dwelling in cities only, would be finally averted. No Parliament which had once experienced the strength that must come from a thorough and just repre- sentation of the whole nation would ever surrender a prin- ciple so essential to its vitality. It would as soon adopt Mahometanism in preference to Christianity. The just pro- portion of workmen might hereafter become a question, and indeed must, for the labourers cannot be excluded for ever, but the chain of precedent would be broken, and the fixed idea would be, not the representation of noses, but of the nation as. a living and complex unity. This, apart from party clamour, is, we take it, the ruling idea both of Conservative and Moderate Liberals, and it is this which, despite Mr. Gladstone's concessions, still remains in danger. We are to have the whole Bill at once, but there is as yet no proof that the whole Bill will be a good one, and, unless it is good, nothing is gained. by passing it except a momentary peace, and still less enduring relief from the weariness of argument. That weariness is beginning already to tell heavily, and weariness is always in favour of those who must advance, namely, the Government, which is pledged to carry a Reform. The discussion is becoming a bore, but that is all the more reason why we should not accept a Bill which opens the way for its incessant renewal. The Government have already learnt much by the great divi- sion, and if they will learn but one thing more, that blank re- duction must, in some way or other, be modified till we are protected from numerical rule, they may solve the problem amid universal support. If not, they will yet discover that the victory of Friday, such as it was, was but a barren triumph.