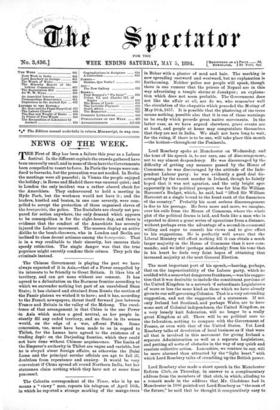 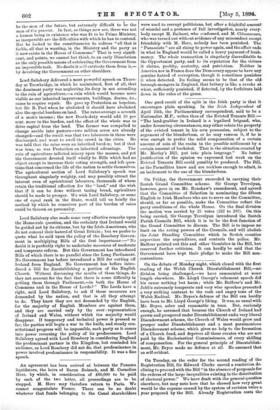 Page 1, 5 May 1894 — Lord Rosebery also made a short speech in the Manchester
Close

Lord Rosebery also made a short speech in the Manchester

Reform Club, on Thursday, in answer to a complimentary address from the members of that club, in which, alluding to a remark made in the address that Mr. Gladstone had in Manchester in 1886 pointed out Lord Rosebery as "the man of the future," he said that he thought it comparatively easy to

be the man of the future, but extremely difficult to be the man of the present. In fact, as things,now are, there was not a human being in existence who was fit to be Prime Minister, so insuperable are the difficulties with which he has to contend. But he looked to the constituencies to redress "all that is feeble, all that is wanting, in the Ministry and the party as it now exists in the House of Commons." That is very signifi- cant, and points, we cannot but think, to an early Dissolution as the only possible means of extricating the Government from an impossible task. No doubt it will extricate them from it,— by devolving the Government on other shoulders.