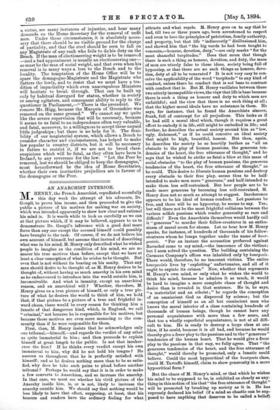 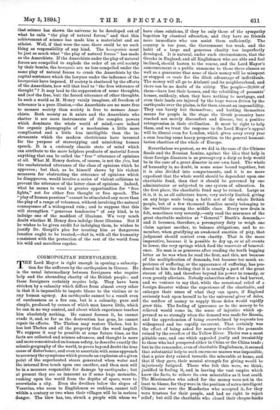 MHENRY, the French Anarchist, repudiated scornfully • this day week the attempt of his advocate, Dr. G-oupil, to prove him insane, and then proceeded to give the public a picture of his motives for making war on society, which was intended apparently to show how clear and rational his mind is. It is worth while to look as carefully as we can at that picture which, if it may be believed, appears to us to demonstrate Dr. Gonpil's inference with a good deal more force than any one except the accused himself could possibly have brought to the task. Of coarse, if we do not believe his own account of himself, but assume that instead of describing what was in his mind, M. Henry only described what he wished people to imagine as the condition of his mind, we are no nearer his true motives than before, except that we have at least a clear conception of what he wishes to be thought. But even that is not without its bearing on his sanity. That any man should desire to be thought of, as M. Henry desires to be thought of, without having as much anarchy in his own mind as he endeavoured to introduce into the world outside him, is inconceivable. And what is insanity, except an anarchical reason, and an anarchical will ? Whether, therefore, M. Henry gives us a true picture of himself, or only a true pic- ture of what he desires the world to think of him, we hold that, if that picture be a picture of a true and frightful in- ward chaos, there would be every reason for thinking him a lunatic of that dangerous kind, which, in England, we call "criminal," not because he is responsible for his motives, but because those motives are even more menacing to the com- munity than if he were responsible for them.

First, then, M. Henry insists that he acknowledges only one tribunal,—himself,--and regards the verdict of any other as quite immaterial to him ; and then proceeds to explain himself at great length to the public. Is not that incoher- ence the first P If he thinks every verdict except his own immaterial to him, why did he not hold his tongue ? He assures us throughout that he is perfectly satisfied with himself ; and as he desires nothing more than to be so satis- fied, why does he take such pains to plead before another tribunal ? Perhaps he would say that it is in order to make a few converts to Anarchism, and so increase the anarchy. In that case, we must see whether his vivid picture of the Anarchy inside him, is, or is not, likely to increase the anarchy outside him. We should say that nothing would be less likely to have that effect, supposing, at leasti that his hearers and readers have the ordinary feeling for what attracts and what repels. M. Henry goes on to say thit he had, till two or three years ago, been accustomed to respect and even to love the principles of patriotism, family authority, and property, but that life " indiscreetly" disillusioned him, and showed him that " the big words he had been taught to venerate,—honour, devotion, duty,"—are only masks "for the most shameful turpitndes." Does that mean that though there is such a thing as honour, devotion, and duty, the mass of men are utterly false to those ideas, society being full of hypocrisy, or that there are no such things as honour, devo- tion, duty at all to be venerated ? It is not very easy to con- ceive the applicability of the word " turpitude" to any kind of conduct, unless there be conduct that is not base to contrast with conduct that is. But M. Henry vacillates between these two utterly incompatible views, the vie_w that life is base because there is such a thing as honour and duty to which men are unfaithful; and the view that there is no such thing at all; that the higher moral ideals have no substance in them. He says, for instance, that he found the Anarchists sincere, frank, full of contempt for all prejudices. This looks as if he had still a moral ideal which, though it requires a great effort to embody it in life, still might be embodied in life; and further, he describes the actual society around him as "low, ugly, dishonest," as if he could conceive an ideal society that might be high, beautiful, honest. But then, again, he describes the society he so heartily loathes as "all an obstacle to the play of human passions, the generous ten- dencies of the heart, the free utterance of thought," and he says that he wished to strike as fatal a blow at this mass of social obstacles "to the play of human passions, the generous tendencies of the heart, the free utterance of thought," as he could. This desire to liberate human passions and destroy every obstacle to their free play, seems thus to be half. intended to make men more " generous," and half-intended to make them less self-restrained. But bow people are to be made more generous by becoming less self-restrained, M. Henry does not so much as attempt to suggest. Incoherence appears to be his ideal of human conduct. Let passions be free, and there will be no hypocrisy, he seems to say. Yes; but will there not be the most frightful collisions between the various selfish passions which render generosity so rare and difficult Even the Anarchists themselves would hardly call it " generous " to murder their fellow-creatures in an enthu- siasm of moral scorn for shams. Let us hear how If. Henry speaks, for instance, of hundreds of thousands of his fellow- creatures whom he lumps together under the name of bour- geoisie. "For an instant the accusation preferred against Ravachol came to my mind,—the innocence of the victims; but I soon solved the question. The building containing the Carmaux Company's offices was inhabited only by bourgeois. There would, therefore, be no innocent victims. The entire bourgeoisie lives by exploiting' unfortunates, and all of it ought to expiate its crimes." Now, whether that represents M. Henry's own mind, or only what he wishes the world to think his mind, because he admires it so much, it would be hard to imagine a more complete chaos of thought and desire than is revealed in that sentence. He is, he says, " a materialist and an atheist ; " he regards the conception of an omniscient God as disproved by science; but the conception of himself as an all but omniscient man who knows the moral interior of a class containing hundreds of thousands of human beings, though he cannot have any personal acquaintance with more than a few score, and that too a wholly superficial acquaintance, is not at all diffi- cult to him. He is ready to destroy a large class at one blow, if he could, because it is all bad, and because he would thereby give a freer play to the passions and to the "generous " tendencies of the human heart. That he would give a freer play to the passions in that way, we fully agree. That "the generous tendencies of the heart, and the free utterance of thought," would there,by be promoted, only a lunatic could believe. Could the most hypocritical of the bourgeois class, could M. Tartuffe himself, claim to show generosity in a more hypocritical form ?

But the chaos of M. Henry's mind, or that which he wishes his mind to be supposed to be, is exhibited as clearly as any- thing in this notion of his that " the free utterance of thought" will be promoted by breaking up society as it is. He has expressly declared his belief (if a mind so chaotic•pan be sup- posed to have anything that deserves to be called a belief) that science has shown the universe to be developed out of what he calls " the play of natural forces," and that this achievement of science has made him a materialist and an atheist. Well, if that were the case, there could be no such thing as responsibility of any kind. The bourgeoisie must be just as much what "the play of natural forces" has made as the Anarchists. If the Anarchists under the play of natural forces are compelled to explode the order of an evil society by their bombs, the bourgeois are no less compelled under the same play of natural forces to crush the Anarchists by the capital sentences which the lawyers under the influence of the bourgeoisie have imposed. If society is shattered by the efforts of the Anarchists, how will that lead to "the free utterance of thought"? It may lead to the suppression of some thoughts, and (not the free, but) the forced utterance of other thoughts. In such a world as M. Henry vainly imagines, all freedom of utterance is a pure illusion,—the Anarchists are no more free to menace society than society is free to menace Anar- chists. Both society as it exists and the Anarchists who shatter it are mere instruments of the complex powers which dominate the whole world of mind,—are indeed the organic phonographs of a mechanism a little more complicated and a little less intelligible than the in- struments which the modern electricians have invented for the purpose of stereotyping and mimicking human speech. It is a curiously chaotic state of mind which can attribute to the mere helpless products of material forces anything that can be called the "free " utterance of opinions at all. What M. Henry desires, of course, is not the free, but the unobstructed utterance of the class of opinions which he approves; but that, as he himself shows by his violent measures for obstructing the utterance of opinions which he disapproves, would involve a series of violent collisions to prevent the utterance of the latter class of opinions. Indeed, what he seems to want is greater opportunities for " free fights," not for either free thought or free speech. The "play of human passions " cannot be stimulated any more than the play of a range of volcanoes, without involving the natural consequence of a widespread ruin ; and to suppose that this will strengthen " generous tendencies " of any kind, is to indulge one of the maddest of illusions. We very much doubt whether M. Henry does indulge these illusions. But if he wishes to be given credit for indulging them, he wishes to justify Dr. Goupil's plea for treating him as dangerous lunatics ought to be treated,—that is, with all the humanity consistent with the protection of the rest of the world from his wild and merciless caprice.