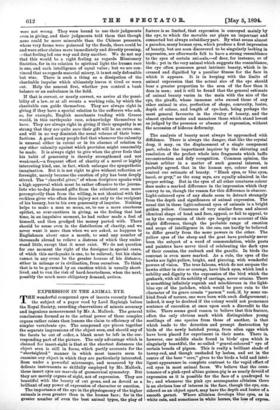 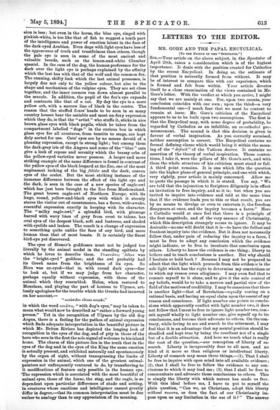 EXPRESSION IN THE ANIMAL EYE.

THE wonderful compound eyes of insects recently formed the subject of a paper read by Lord Rayleigh before the Royal Society, recording observations of minute accuracy and ingenious measurement by Mr. A. Mallock. The general conclusions formed as to the actual power of these complex organs rather raises than lessens the claim to efficiency of the simpler vertebrate eye. The compound eye pieces together the separate impressions of the object seen, and should any of the facets be out of order, a blank must be left in the cor- responding part of the picture. The only advantage which is claimed for insect-sight is that at the shortest distances the object seen is still in focus, which partly accounts for the "shortsighted" manner in which most insects seem to examine any object in which they are particularly interested. Seen under a powerful microscope, and measured by the delicate instruments so skilfully employed by Mr. Mallock, these insect eyes are marvels of geometrical symmetry. But they are merely organs of sight, not of expression. They are beautiful with the beauty of cut gems, and as devoid as a brilliant of any power of expression of character or emotion.

The importance of the eye in the physiognomy of the higher animals is even greater than in the human face; for in the greater number of even the best animal types, the play of feature is so limited, that expression is conveyed mainly by the eye, to which the movable ear plays an important and connected but always subsidiary part. By what seems almost a paradox, many human eyes, which produce a first impression of beauty, but are soon discovered to be singularly lacking in expression, are afterwards felt to have a strong resemblance to the eyes of certain animals,—of deer, for instance, or of birds ; yet in the very animal which suggests the resemblance, the eye often possesses great intrinsic beauty, which is in- creased and dignified by a peculiar fitness for the face in which it appears. It is in keeping with the limits of animal expression that the actual size of the eye should bear a greater proportion to the area of the face than it does in man ; and it will be found that the general estimate of animal beauty varies in the main with the size of the eye, the giraffe, whose immense orbs exceed those of any other animal in size, perfection of shape, convexity, lustre, depth of colour, and length of eye-lash, being perhaps the most general favourite in the rivalry of beauty, and the almost eyeless moles and manatees those which stand lowest as judged by the presence or absence of expression, without the accession of hideous deformity.

The analysis of beauty must always be approached with diffidence. There is always the danger, that like the crystal drop, it may, on the displacement of a single component part, rebuke the impertinent inquirer by the shivering and resolution of the perfect whole into fragments which baffle reconstruction and defy recognition. Common opinion, the fairest arbiter in a matter of such general interest, is probably agreed, that in the human eye, colour does not control our estimate of beauty. " Black eyes, or blue eyes, hazel, or grey," as the song says, are equally admired in the proper setting. But in the eyes of all other creatures colour does make a marked difference in the impression which they convey to us, though the reason for this difference is obscure. Light-coloured eyes of any shade seem to detract strangely from the depth and significance of animal expression. The usual tint in these light-coloured eyes of animals is a bright golden yellow. Creatures of very similar form and almost identical shape of head and face, appeal, or fail to appeal, to us by the expression of their eye largely on account of this slight difference, though the probable range of emotion and scope of intelligence in the one, can hardly be believed to differ greatly from the same powers in the other. The yellow eyes of the sheep and the goat have probably never been the subject of a word of commendation, while poets and painters have never tired of celebrating the dark eyes of their cousins, the roebuck and the gazelle. In birds the contrast is even more marked. As a rule, the eyes of the hawks are light-yellow, bright, and piercing, with wonderful powers of vision. The true falcons, which do not surpass the hawks either in size or courage, have black eyes, which lend a nobility and dignity to the expression of the bird which the goshawk, with all its nobility of carriage, never attains. There is something infinitely roguish and mischievous in the light- blue eye of the jackdaw, which would be pure ruin to the character of its grave cousin " parson" rook, if, by some un- kind freak of nature, one were born with such disfigurement ; indeed, it may be doubted if the colony would not pronounce sentence of execution at once upon such a discredit to the tribe. There seems good reason to believe that this feature, often the only obvious mark which distinguishes young nestlings of one species from those of another, is that which leads to the detection and prompt destruction by birds of the newly hatched young, from alien eggs which have been placed for experiment in their nests. There is, however, one middle shade found in birds' eyes which is singularly beautiful, the so-called "gravel-coloured" eye of certain breeds of pigeon. This is really a brilliant shade of tawny-red, and though unshaded by lashes, and set in the centre of the bare " cere," gives to the birds a bold and intel- ligent appearance in complete contrast to the vapid effect of red eyes in most animal faces. We believe that the coun- tenance of a pink-eyed albino guinea-pig is as nearly devoid of expression as it is possible for the face of a quadruped to be ; and whenever the pink eye accompanies albinism there is an obvious loss of interest in the face, though the eye, con- sidered as an object apart, may have the depth and lustre of a smooth garnet. Where albinism develops blue eyes, as in white cats, and sometimes in white horses, the loss of expres.

.sion is less ; but even in the horse, the blue eye, ringed with pinkish-white, is too like that of fish to suggest a tenth part of the intelligence and power of emotion latent in the face of the dark-eyed Arabian. Even dogs with light eyes have less of the appearance of truth and trustfulness than others, though the pale eye is seen in some of the most ancient and valuable breeds, such as the lemon-and-white Clumber spaniel. In the case of the dog, the human preference for the dark over the light eye is perhaps explained by the affinity which the last has with that of the wolf and the common fox. The cunning, shifty look which the last animal possesses, is largely due not only to the yellow colour, but also to the shape and mechanism of the vulpine eyes. They are set close together, and the inner corners run down almost parallel to the muzzle. In addition, the pupil of the fox's eye expands and contracts like that of a cat. By day the eye is a mere yellow orb, with a narrow line of black in the centre. The reason that the stuffed foxes' heads to be seen in so many country houses bear the amiable and most un-foxy expression which they do, is that the " artist " who stuffs it, sticks in nice brown glass eyes with black pupils, which he takes from the compartment labelled " dogs " in the curious box in which glass eyes for all creatures, from tomtits to stags, are kept duly sorted for use. Cats' eyes are by no means devoid of a pleasing expression, except in strong light ; but among them the dark-grey iris of the Angora and some of the " blue " cats give a look of repose and serenity which the brassy orbs of the yellow-eyed varieties never possess. A larger and more striking example of the same difference is found in contrast of the yellow eyes of the black leopard at the Zoo, one of the most unpleasant looking of the big felidx and the dark, convex eyes of the ocelot. But the most striking instance of the immense difference between the effect of the light eye and the dark, is seen in the case of a new species of eagle-owl which has just been brought to the Zoo from Mashonaland. The great brown eagle-owl of Northern Europe, with its huge, round, yellow-and-black eyes with which it sternly stares the visitor out of countenance, has a fierce, wide-awake, resentful expression exactly in keeping with its character. The " milky eagle-owl," a splendid bird, with plumage barred with wavy lines of grey from crest to talons, has oval eyes of the deepest black, soft and lustrous, and shaded with eyelids and lashes. The result is a change of expression to something quite unlike the face of any bird, and more human than that of most beasts. It is certainly the finest bird-eye yet discovered.

The eyes of Homer's goddesses must not be judged too literally by the animal model in the standing epithets by which he loves to describe them. rxecuziLwr; 'Agivx was the " bright-eyed " goddess; and the owl probably had its Greek name from the brightness of its eyes. So Hera was ox-eyed—that is, with round dark eyes—fine to look at, but if we may judge from her character, -perhaps equally without expression, with those of the -animal which they resembled. Helen, when restored to Menelaus, and playing the part of hostess to Ulysses, art. dewily apologises for the trouble which the Greeks had incurred on her account,— "icure:nriaos EU'EKa Kovpiis," in which the word zukid'zic, "with dog's eyes," may be taken to mean what would now be described as " rather a forward young person." Yet in the recognition of Ulysses by the old dog Argus, there is a feeling for the pathos of animal expression -which finds adequate interpretation in the beautiful picture in which Mr. Briton Riviere has depicted the longing look of recognition in the eyes of the dog, and of pity in those of the hero who sees in the first the sole signal of welcome to his island home. The charm of this picture lies in the truth that in the eyes of the dog and in the eyes of the King the same emotion is actually present, and exhibited naturally and spontaneously by the organ of sight, without transgressing the limits of expression in the animal, which one of the greatest animal- painters not unfrequently ventured to do, by transferring to it modifications of feature only possible in the human eye. 'The expression which is associated with the most beautiful of animal eyes, those of the horse, the stag, and the eagle, is so dependent upon particular differences of shade and setting, in creatures whose emotions and intelligence cannot greatly differ in degree,—that its common interpretation must be due rather-to analogy than to any appreciation of its meaning.