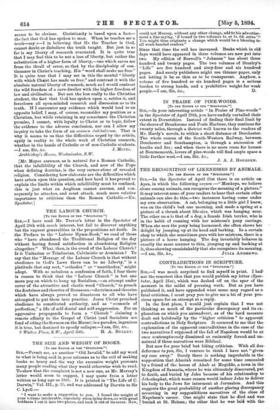 [To THY EDITOR OF THE "SPECTATOR."] have read Mr. Trevor's letter in the Spectator of April 28th with much interest, but fail to discover anything but the vaguest generalities in the propositions set forth. In the Preface to the " Labour Hymn-Book," we read of those who " have abandoned the Traditional Religion of the day without having found satisfaction in abandoning Religion altogether." What, then, is the creed of the Labour Church? Is it Unitarian or Trinitarian, Calvinistic or Arminian ? To say that the "Message of the Labour Church is that without obedience to God's Laws there can be no Liberty," is a platitude that any sect, " orthodox " or " unorthodox," might adopt. With so nebulous a confession of faith, I fear there is reason to think that the " Labour Church " is but one more peg on which to hang up Socialism,—an attempt under cover of the attractive and elastic word " Church," to preach the doctrines and theories of Rousseau,—doctrines and theories which have always proved so disastrous to all who have attempted to pat them into practice. Jesus Christ preached obedience to constituted authority, and as " counsels of perfection," a life of self-denial and self-suppression. For an aggressive propaganda to form a " Church " claiming a remote affinity to the Gospel of Christ (and Socialists are fond of citing the Sermon on the Mount) is a paradox, ingenious it is true, but destined to speedy collapse.—I am, Sir, &o., 9 Walton Place, S.W., April 30th. H. A. BULLEY.