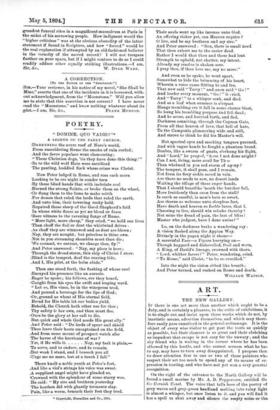 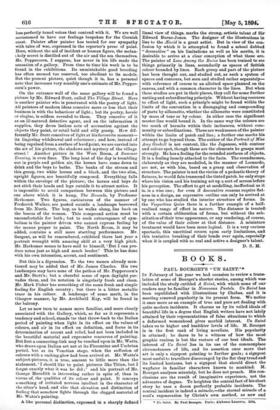 IF there is one act more than another which ought to be a duty, and is certainly a pleasure, to the critic of exhibitions, it is to single out and insist upon those works which do not, by inartistic means, advertise themselves, and which may there- fore easily pass unnoticed in the general scrimmage. It is the object of every wise visitor to get past the touts as quickly as possible, but their clamour is so great and their clutching so impudent that escape is not easy for the unwary ; and the shy friend who is waiting in the corner where he has been elbowed by this hustle, and who cannot scream what he has to say, may have to turn away disappointed. I propose then to draw attention first to one or two of those painters who respect their art too much to spend any of its means of ex- pression in touting, and who have not yet won a very general recognition.

On the right of the entrance to the North Gallery will be found a small marine by Mr. A. D. Peppercorn, entitled On the Cornish Coast. The voice that tells here of the poetry of grey waves and grey-green headland melting into rainy light is almost a whisper, but once listen to it, and you will find it has a spell to shut away and silence the empty noise or the

less perfectly tuned voices that contend with it. We are well accustomed to have our feelings bespoken for the Cornish coast. Painter after painter has touted for our sympathy with tales of woe, expressed in the reporter's prose of paint. Here, without the aid of incident or human figure, the melan- c holy secret is distilled out of the air and the sea themselves. Mr. Peppercorn, I suppose, has never in his life made the sensation of a gallery. From time to time his work is to be found in the exhibitions. Its unmistakable good breeding has often seemed too reserved, too obedient to its models. But the present picture, quiet though it is, has a personal note that increases very sensibly one's estimate of Mr. Pepper- corn's power.

On the entrance wall of the same gallery will be found a picture by Mr. Edward Stott, called The Village Street. Here is another painter who is penetrated with the poetry of light. All painters of modern ideas conceive more or less that their business is with the behaviour of light ; but its poetry, heroic or elegiac, is seldom revealed to them. They conceive of it as an ill-natured detective agent, and on the information it supplies, they dress listless acts of accusation against the objects they paint, or retail bald and silly gossip. Hew dif- ferently Mr. Stott conceives of light at his favourite moment— its lingering withdrawal and reluctance ; and how, instead of being repulsed from a surface of hard paint, we are carried into the air of his picture, the shadows and mystery of the village street ! Another picture in the West Room, A Summer Evening, is even finer. The long heat of the day is trembling out in purple and golden air, the horses have come down to drink and the boys to bathe. The banks of the stream and this group, two white horses and a black, and the two slim, upright figures, are beautifully composed. Everything falls within the envelope of the picture; the horses and boys do not stick their heads and legs outside it to attract notice. It is impossible to avoid comparison between this picture and one above which it is hang, The Nomads, by Professor Herkomer. Two figures, caricatures of the manner of Frederick Walker, are pasted outside a landscape borrowed from Mr. North. The boy, as he walks along, lies back on the bosom of the woman. This compound action must be uncomfortable for both ; but to such extravagance of sym- bolism is the painter driven who cannot express feeling by the means proper to paint. The North Room, it may be added, contains a still more startling performance. Mr. Sargent, as will be remembered, exhibited there last year a portrait wrought with amazing skill at a very high pitch. Mr. Herkomer seems to have said to himself, But I can pro- duce notes just as high and much louder.' This he has done with his own intonation, accent, and sentiment.

But this is a digression. To the two names already men- tioned may be added that of Mr. James Charles. His two landscapes may have none of the pathos of Mr. Peppercorn's and Mr. Stott's ; but a cheerful sense of open daylight per- vades them, and its notation is singularly fresh and clean. Mr. Mark Fisher has something of the same fresh and simple feeling for English country ; but there is a bitter metallic trace in his colour. A landscape of some merit, in the Glasgow manner, by Mr. Archibald Kay, will be found in the balcony.

Let us now turn to names more familiar, and more closely associated with the Gallery, which, so far as it represents a tendency and school, stands for that throw-back to the Italian period of painting when light in its effect on the values of colours, and air in its effect on definition, and focus in its determination of accent and relief, had not been included in the beautiful material and expressive resources of painting. But first a connecting-link may be touched upon in Mr. Watts, who draws upon Italian art not at its Florentine and Umbrian period, but at its Venetian stage, when the suffusion of colours with a uniting glow had been arrived at. Mr. Watts's subject-pictures, it is true, amount to little more than the statement, I should like to paint pictures like Titian, but I forget exactly what it was he did ; ' and his portrait of Mr. George Meredith is interesting rather in spite of, than in virtue of, the qualities of its colour and paint. It conveys something of irritated nervous intellect in the character of the sitter's head, and also that elevation and distinction of feeling that somehow fights through the clogged material of Mr. Watts's painting.

A like personal distinction, expressed in a sharply defined lineal view of things, marks the strong, artistic talent of Sir" Edward Burne-Jones. The designer of the illustrations in line to the LEneid is a great artist. But in view of the con, fusion by which it is attempted to found a school dubbed " decorative " on his limitations as well as his merits, it is desirable to arrive at a clear conception of what these are. The painter of Love Among the Ruins has been trained to see things primarily in lines, secondarily as spaces of flattish colour bounded by lines. Each group and part of the picture has been thought out, and studied out, as such a system of spaces and contours, but seen and studied rather separately— with reference of course to an allotted space planned on the canvas, and with a common character in the lines. But when these studies are put in their places, they call for some further uniting and subordinating principle. Without having recourse to effect of light, such a principle might be found within the limits of the convention in a disengaging and compounding of parts by silhouette, whether the silhouette were constituted by mass of tone or by colour. In either case the significant master-line would bound it. In the same way the colours are too much of hermits within their inclosures, without com- munity or subordinations. These are weaknesses of the painter within the limits of patch and line; a further one marks his" attemptto go beyond them. The author of the Portrait of Miss Amy Gaskell is not content, like the Japanese, with contour and colour spot, though these are the elements be grasps most strongly. He has a feeling for the rounded surfaces of objects. It is a feeling loosely attached to the facts. The roundnesses,. elaborately as they are modelled, in the manner of Leonardo, are not, as with him, based on a grasp and observation of structure. The painter is not the victim of a pedantic theory of flatness, he would fain transcend the tinted patch, he only stops- where his vision and his training set up a sort of screen, before his perception. The effort to get at modelling, ineffectual as it is. is a wise one; for even if decorative reasons require flat- ness in a design, an expressive outline can only be arrived at by one who has studied the interior structure of forms. In the Vespertina Quies there is a further example of a half- realised range of effect in nature. The distance is treatedt with a certain obliteration of forms, but without the sub- stitution of their true appearance, or any rendering, of course, of the value of their colour at that distance. A miniature treatment would have been more logical. It is a very curious spectacle, this uncritical return upon early limitations, aad this tentative breaking of their bonds over again, especially when it is coupled with so real and active a designer's talent..