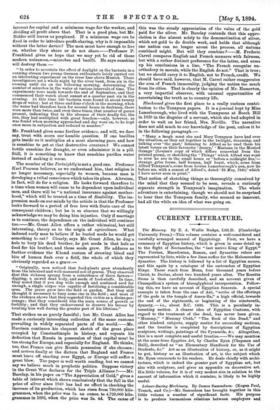 The Mummy. By E. A. Wallis Budge, Litt.D. (Cambridge University Press.)—This volume contains a well-considered and carefully arranged manual of Egyptology. First, we have a summary of Egyptian history, which is given in some detail up to the flight of Nectanebus, the " last native King of Egypt." The Persian, Macedonian, Roman, and Byzantine rulers are represented by lists, while a few lines suffice for the Mahommedan dynasties. The history is followed by a list of Egyptian names, and this again by a catalogue of the cartouches of Egyptian Kings. These reach from Mena, four thousand years before Christ, to Decius, about two hundred years after. The Rosetta Stone is then carefully described, and an account given of Champollion's system of hieroglyphical interpretation. Follow- ing this, we have an account of Egyptian funerals. A special example is taken from the case of Ani, "scribe of the offerings of the gods in the temple of Amen-Ra," a high official, towards the end of the eighteenth, or beginning of the nineteenth, dynasty, — i.e., about B.C. 1400. This is a peculiarly in- teresting section. A clearer idea of Egyptian Customs, with regard to the treatment of the dead, has never been given. " Mummy," " Mummy Cloth," " The Book of the Dead," and other kindred subjects, supply matter for succeeding sections, and the treatise is completed by descriptions of Egyptian sculpture, writings, paintings of the Pyramids, &a. Altogether, this is a most complete and useful treatise.—We may mention at the same time Egyptian Art, by Charles Ryan (Chapman and Hall), described as " an Elementary Handbook for the Use of Students, &c." Art as an illustration of history, or, as it might be put, history as an illustration of art, is the subject which Mr. Ryan commends to his readers. He deals chiefly with archi- tecture, which is indeed the greater part of Egyptian art, but also with sculpture, and gives an appendix on decorative art. His little volume, for it is of very modest size in relation to the amount of information which it contains, is likely to be highly useful.