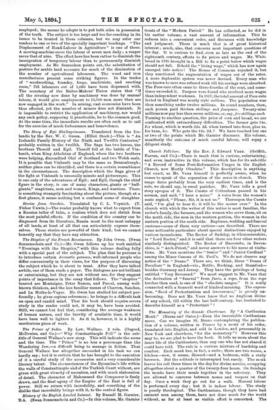 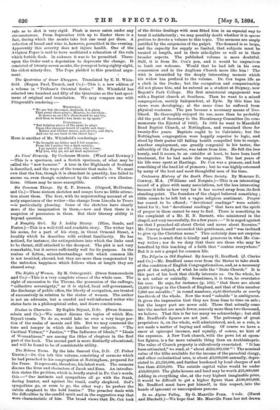 The Monastery of the Grande Chartreuse. By " A Carthusian

Monk." (Bums and Oates.)—Even the immutable Carthusian move. Can we imagine St. Bruno contemplating the publica- tion of a volume, written in France by a monk of his order, translated into English, and sold in London, and presumably in New York and elsewhere, "for the monastery" ? However this may be, we are glad to have the book. It tells us more about the inner life of the Carthusians, than any one who has not shared it could have told. The rule is a curious mixture of hardship and comfort. Each monk has, in fact, a suite; there are two rooms, a kitchen—now, it seems, disused—and a bedroom, with a study between. But the solitude is interrupted but rarely. The monk leaves his cell three times in the day for divine service, occupying altogether about a quarter of the twenty-four hours. On Sundays the monks have their meals together in the refectory. They are allowed to converse between nones and vespers on that day. Once a week they go out for a walk. Manual labour is performed every day ; but it is indoor labour. The study is purely theological. The Carthusians, though they have had eminent men among them, have not done much for the world without, as far at least as visible effort is concerned. The rule as to diet is very rigid, Flesh is_ never eaten ,under any circumstances. From September 14th up to Easter there is a fast, during which the monks take but one meal per diem. A. refection of bread and wine is, however, permitted in the evening. Apparently this severity does not injure health. One of the Avignon Popes is said to have meditated a relaxation of the rule which forbids flesh. In sickness it was to be permitted. There- upon the Order sent a deputation to deprecate the change. It consisted of twenty-seven monks, the youngest being eighty-eight, the eldest ninety-five. The Pope yielded to this practical argu- ment.