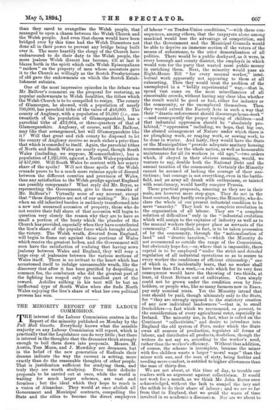 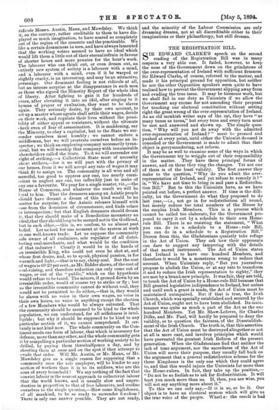 T711, MINORITY REPORT OF THE LABOUR COMMISSION. T HE interest of

the Labour Commission centres in the Report of the minority published on Monday by the Pall Mall Gazette. Everybody knows what the sensible majority on any Labour Commission will report, which is practically that the Legislature can do very little ; but there is interest in the thoughts that the dreamers think strongly enough to boil them down into proposals. Messrs. M. Austin, Tom Mann, and J. Mawdsley are dreamers, but in the belief of the new generation of Radicals their dreams indicate the way the current is setting, more exactly than do the reasonable thoughts of other people. That is justification sufficient for studying them, and truly they are worth studying. Even their definite proposals to be carried out at once, while the world is waiting for much larger schemes, are vast and formless ; but the ideal which they hope to reach is a vision of Alnaschar. They would at once abolish all Government and Municipal contracts, compelling the State and the cities to become the direct employers of labour " on Trades-Union conditions,"—with these con- sequences, among others, that the taxpayers alone among mankind would lose the advantage of competition, and that the Government and the Municipal Councils would be able to deprive an immense section of the voters of the means of subsistence, to the utter demoralisation of all politics. There would be a public dockyard, as it were, in every borough and county district, the employes in which would vote for the party that wasted most public money in enriching them. Next, the minority would pass an Eight-Hours Bill " for every manual worker," intel- lectual work apparently not appearing to them at all exhausting. Then they would treat the problem of the unemployed in a " boldly experimental " way,—that is, spend vast sums on the most miscellaneous of all conceivable crowds, without having any clear idea whether the result would be good or bad, either for industry or the community, or the unemployed themselves. Then they would extend the Factory Acts in such a way that their " drastic enforcement should discourage home-work " —and consequently the proper rearing of children—and that industrial oppression should be " absolutely pro- hibited," " oppression " including, we hope, that big one, the absurd arrangement of Nature under which there is no ploughing work, or reaping work, or sowing work, to be done in winter. And lastly, they would have the State or the Municipalities "provide adequate sanitary housing accommodation for the whole nation, as well as honourable maintenance for all its workers in old age,"—two orders which, if obeyed in their obvious meaning, would, we venture to say, double both the National Debt and the annual taxation of the community. Certainly the Minority cannot be accused of lacking the courage of their con- victions; but courage is not everything, even in the battle- field, and an army all drunk with enthusiasm, or tainted with semi-lunacy, would hardly conquer Prussia.

These practical proposals, amazing as they are in their scale, are however mere stop-gaps. They do not in the least content, they hardly even please, the Minority, who de- clare the whole of our present industrial condition to be mere "anarchy." They look to a complete revolution in the organisation of all labour. They see " a complete solution of difficulties" only in the " industrial evolution which will assign to the captains of industry as well as to the manual workers their proper place as servants of the community." All capital, in fact, is to be taken possession of by the community, through the "nationalisation of land " and " drastic taxation,"—which the Minority do not recommend as outside the range of the Commission, but obviously hope for,—or, where that is impossible, there capital is to be employed " under the strict and detailed regulation of all industrial operations so as to secure to every worker the conditions of efficient citizenship ;" one of which is, we incidentally learn, that no worker shall have less than 21s. a week,—a rule which for its very first consequence would have the throwing of two-thirds, at least, of Great Britain out of cultivation. Corn simply could not be grown under the condition even by free- holders, or people who, like so many farmers now in Essex, pay only nominal rents. Yet the Minority intend that rent should be paid, though ultimately only to the State, for " they are strongly opposed to the statutory creation of any new individual landowners "—that is, to small freeholders—a fact which we recommend, en passant, to the consideration of every agricultural voter, especially in Ireland. The minority are, in fact, what is called on the Continent " collectivists," and desire to introduce into England the old system of Peru, under which the State owns all sources of production, regulates all forms of labour, and distributes all products, doubtless, though the writers do not say so, according to the worker's need, rather than the worker's efficiency. Without that addition, of course, the scheme is incomplete, because the miner with five children wants a larger " moral wage" than the' miner with one, and the man of sixty, being feebler and needing more comfort, is entitled to higher allowances than the man of thirty-five.

We are not about, at this time of day, to trouble our readers with an argument against collectivism. It would not work for a month, as we think Mr. John Burns once acknowledged, without the lash to compel the lazy and the selfish to do their share of labour ; and we are so far from that in England, that we avoid the waste of time involved in so academic a discussion. Nor are we about to ridicule Messrs. Austin, Mann, and Mawdsley. We think it, on the contrary, rather creditable to them to have dis- played so much imagination, to have soared so completely out of the region of the concrete and the practicable. We like a certain dreaminess in men, and have always lamented that the working voters seemed to have no ideal which would lift them a little out of their eternalrefrain in favour of shorter hours and more pennies for the hour's work. The labourer who can think out, or even dream. out, an entirely new system of society is a labourer with a mind, and a labourer with a mind, even if it be warped or slightly cracky, is an interesting, and may be an attractive, personage. Our dominant feeling is not ridicule at all, but an intense surprise at the disappearance in such men as those who signed the Minority Report of the whole idea of liberty. Atter fighting to gain it for hundreds of ears, after elevating it into an idol, after singing to it hymns of prayer or exultation, they want to be slaves again. They seriously desire, by their own account, to set up a master whose agents shall settle their wages, decide on their work, and regulate their lives without the possi- bility of either appeal or resistance, without the ultimate check even of fear of assassination. It is maddening, say the Minority, to obey a capitalist, but to the State we sur- render ourselves most humbly ; we cannot endure a middleman, but we will prostrate ourselves before an in- spector; we think an employing company necessarily tyran- nical, but we will worship that company with innumerable shareholders called the State. To it we will surrender our right of striking,—a Collectivist State must of necessity shoot strikers,—for it we will part with the privacy of our homes, from it we will accept any rate of wages it may think fit to assign us. The community is all wise and all merciful, too good to oppress any one, too nearly omni- scient to neglect any one, too inflexibly just to make of any one a favourite. We pray for a single master, viz.,—the House of Commons, and whatever the result we will be loyal to him. That the dreamers among an Asiatic people =should have dreamt a dream of this kind would be no matter for surprise, for the Asiatic releases himself with ease from the dominion of circumstance, and finds solace iu introspection; but that English dreamers should dream it, that they should make of a Benedictine monastery an i deal,t hat they should long to be merged not in the Godhead, but in each other,—this is, we confess, to us almost past belief. Let us look for one moment at the system at work in one well-known trade. Let us suppose the community sole owner of all coalmines, sole regulator of all distri- buting coal-merchants, and what would be the condition of that industry ? Clearly it would be in the hands of an irresistible King, who could not even be shot at, and whose first desire, and, so to speak, physical passion, is for warmth and light,—that is to say, cheap coal. But the cost -of wages is 69.29 per cent.,as Mr. Bidder shows, of the cost of coal-raising, and therefore reduction can only come out of wages, or out of the " public," which on the hypothesis would refuse to be taxed. The miners, if ground down by an irresistible order, would of course try to strike or fly ; but as the irresistible community cannot do without coal, they would not be permitted to do either,—that is, they would be slaves with no voice in their own wages, no voice in their own hours, no voice in anything except the election of a few Members who would be always outvoted. That the community should be assumed to be kind to the whole population, we can understand, for all selfishness is intel- ligible; but why it should be supposed to be kind to any particular section of it, we cannot comprehend. It cer- tainly is not kind now. The whole community on the Con- tinent needs one form of labour, that which is necessary for defence, more than anyother, and the whole community gets it by compelling a particular section of working society to be drilled, by paying them threehalfpence a day, and by shooting them at once and on the spot if they attempt to evade that order. Will Mr. Austin, or Mr. Mann, or Mr. Mawdsley give us a single reason for supposing that a community once the sole employer, will be kinder to any section of workers than it is to its soldiers, who are the sons of every household ? We say nothing of the fact that convict labour is the nearest approach to collectivist labour thatthe world knows, and is usually slow and unpro- ductive in proportion to that of free labourers, and confine ourselves to the single question,—How come Englishmen, of allmankind, to be so ready to surrender freedom?

i There is only one answer possible. They are not ready, and the minority of the Labour Commission are only dreaming dreams, not at all discreditable either to their imaginations or their philanthropy, but still dreams.