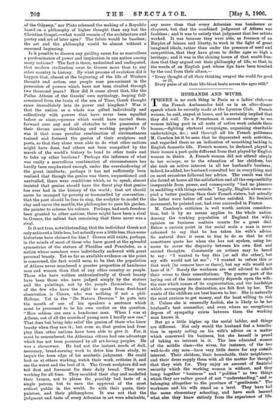 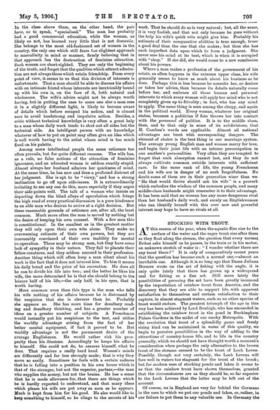 THERE is no such thing in Paris as a ladies' club,—so the French Ambassador told us in an after-dinner speech which he recently made at the Lyceum Club. French women, he said, stayed at home, and he certainly implied that they did well. To a Frenchman it seemed strange to see women taking part in all sorts of active work outside their homes,—fighting electoral campaigns, organising charitable undertakings, &c. ; and through all his French politeness M. Cambon let it be seen that he deprecated such activities, and regarded them as an indication of something lacking in English domestic life. French women, he declared, played in their homes a part quite different from that played by English women in theirs. A French woman did not attend simply to her mkage, or to the education of her children, but she took an active interest in all her husband's business; indeed, he added, her husband consulted her in everything, and on most occasions followed her advice. The result was that she found at home all the satisfaction and all the responsibility inseparable from power, and consequently "had no pleasure in meddling with things outside." Legally, English wives occu- pied a better position than their French sisters, but actually the latter were better off and better satisfied. No feminist movement, he pointed out, had ever succeeded in France.

M. Cambon's criticism is well worth serious considera- tion, but it by no means applies to the whole nation. Among the working_ population of England the wife's opinion on business matters counts for a great deal. Below a certain point in the social scale a man is never ashamed to say that he has taken his wife's advice. So natural does it seem to him to do so that he will sometimes quote her when she has not spoken, using her name to cover the disparity between his own first and second thoughts. Constantly an artisan may be heard to say : "I wanted to buy this [or sell the other], but my wife would not let me" ; "I wanted to refuse this or that work [to remove here or there], but my wife would not hear of it." Surely the workmen are well advised to admit their wives to their consultations. The greater part of the laying out of the income necessarily depends upon the wife; the ease which comes of its augmentation, and the hardships which accompany its diminution, are felt first by her. The wants of the children are best known to her. She is naturally the most anxious to get money, and the least willing to risk it. Unless she is unusually foolish, she is likely to be her husband's best counsellor, and even where no exceptional degree of sympathy exists between them the working man knows it.

But go a little higher up the social ladder, and things are different. Not only would the husband feel a humilia- tion in openly acting on his wife's advice on a matter which concerned his business, but she herself is proud of taking no interest in it. The less educated women of the middle class—the wives, for instance, of the less

well-to-do city men—have very little desire for any outside interest. Their children, their households, their neighbours, and their dress supply them with all the matter for thought that they wish for. They enjoy an amount of financial security which the working woman is without, and they lump together " business " and " politics " as two things which they are rather proud of not "understanding," and as belonging altogether to the province of "gentlemen." The workman and his wife stand on a level. They have had the same elementary schooling, and have each learned what else they know entirely from the experience of life. In the class above them, on the other hand, the pair have, so to speak, "specialised." The man has probably luid a good commercial education, while the woman, as likely as not, has learned very little that is not domestic. She belongs to the most old-fashioned set of women in the country, the only one which still fears tae slightest approach to masculinity in mind or manner, firmly believing that in that approach lies the destruction of feminine attraction. Such women are short-sighted. They see only the beginning of the truth, and forget that the qualities which attract admira- tion are not always those which retain friendship. From every point of view, it seems to us that this division of interests is unfortunate. That a man should be able to discuss his affairs with an intimate friend whose interests are inextricably bound up with his own is, on the face of it, both natural and wholesome. The wife's advice might not be always worth having, but in putting the case to some one else a man sees it in a slightly different light, is likely to become aware of details which before escaped his notice, and is almost sure to avoid headstrong and impulsive action. Besides, a critic without technical knowledge is very often a great help to a man whose daily work tends to shut out all sides but the technical side. An intelligent person with no knowledge whatever of how to put on paint may often give an idea which is well worth having to the artist whose mind is too much fixed on his palette.

Among more intellectual people the same reticence too often prevails, but for quite different reasons. The wife has, as a rule, no false notions of the attraction of feminine ignorance, and an educated woman is seldom exactly stupid. Almost always her husband admires her quickness of mind. At the same time, he has now and then a profound distrust of her judgment. She is apt to be " viewy," and has a strong inclination to go off upon side-issues. It is extraordinarily irritating to see any one do this, more especially if they argue their side-points well. The talk of a woman who insists on departing down the blind alleys of speculation which fringe the high road of every practical discussion is a pure hindrance to an able man who desires to arrive at a right decision. But these reasonable grounds of reticence are, after all, the least common. Much more often the man is moved by nothing but the desire of keeping his own counsel. With a few men this is constitutional. In the smallest as in the greatest matter they will rely upon their own wits alone. They make no overweening estimate of their own powers, but they are irrevocably convinced of their own inability for mental cooperation. These may be strong men, but they have some lack of sympathy in their nature. They fail to placate their fellow-creatures, and they seldom succeed in their profession. Another thing which will often keep a man silent about his work is the fact that it does not interest him. To him it means his daily bread and the price of his recreation. He does all he can to divide his life into two ; and the better he likes his 'wife, the more determined he is that she should belong to the leisure half of his life,—the only half, in his eyes, that is worth having.

More common even than this type is the man who tells his wife 3:bathing of his affairs because he is distressed by the suspicion that she is cleverer than he. Probably she appears so. She has more time for desultory read- ing and desultory thinking, and has a greater number of ideas on a greater number of subjects. A Frenchman would instantly put his suspicions to the test, and utilise the worldly advantage arising from the fact of her better mental equipment, if fact it proved to be. But worldly advantage is not the paramount desire of the average Englishman. He would rather risk his pros- perity than his illusions. Accordingly he keeps his affairs to himself. She could not do, he assures himself, what he does. That requires a really bard head. Women's minds are differently and far less strongly made; that is why they move so easily. Sometimes he feels with a certain sadness that he is falling into a position in his own house which is that of the stronger, but not the superior, partner,—the man who supplies the money, but not the brains. He has a sense that he is made allowance for, that there are things which he is hardly expected to understand, and that many ideas which please his wife are put away as soon as he appears. Much is kept from him for his good. He also would like to keep something to himself, so he clings to the secrets of his work. That he should do so is very natural; but, all the same, it is very foolish, and that not only because he goes without the help his wife's quick wits might give him. Probably his estimate of their comparative abilities is true enough, truer a good deal than the one that she makes; but then she has such imperfect data upon which to form a judgment. She never sees his mind at its best, which is when it is occupied with "shop." If she did, she would come to a new conclusion about his powers.

Where a man makes a profession of the government of his estate, as often happens in the extreme upper class, his wife generally seems to know as much about his business as he does. Perhaps this is less because he consults her, or desires or takes her advice, than because its details naturally come before her, and embrace all those human and personal interests to which every woman will apply her mind who is not completely given up to frivolity ; in fact, who has any mind to apply. The same thing is seen among the clergy, and again in the political world. Every woman, whatever her original status, becomes a politician if fate throws her into contact with the personnel of politics. It is to the middle class, then, and to that only in some of its subdivisions, that M. Cambon's words are applicable. Almost all national advantages are beset with corresponding dangers. The element of choice is the best thing in our marriage system. The average young English man and woman marry for love, and begin their joint life with an intense preoccupation in one another's personalities. Very often they are tempted to forget that such absorption cannot last, and they do not always cultivate common outside interests with sufficient care. In the same rank of life, the young Frenchman and his wife are in danger of no such forgetfulness. No doubt some of them are in their generation wiser than we. "He that would thrive should ask his wife" is a proverb which embodies the wisdom of the common people, and many middle-class husbands might remember it to their advantage. It has been said that no woman has any more dangerous rival than her husband's daily work, and surely an Englishwoman who can identify herself with this ever new and powerful interest may hope to have no rivals at all.