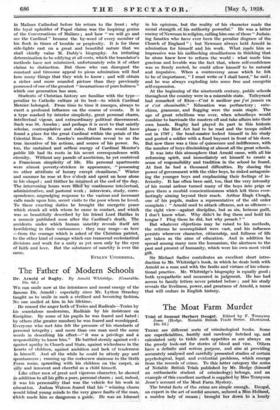 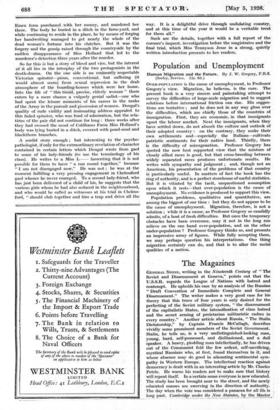 THERE are different sorts of criminological books. Some are superficialities, hastily - and carelessly botched up, and calculated only to tickle such appetites as are always on the greedy look-out for stories of blood and vice. Others have a definite and serious purpose, and aim at providing accurately analysed and carefully presented studies of certain psychological, legal, and evidential problems, which emerge from the records of crime. To this latter category the series of Notable British Trials published by Mr. Hodge (himself an enthusiastic student of criminology) belongs, and an example of this excellent method is supplied by Miss Tennyson Jesse's account of the Moat Farm Mystery.

The brutal facts of the crime are simple enough. Dougal, an expert in the art of sordid amours, seduced a Miss Holland, a maiden lady of means ; brought her down to a lonely

Essex farm purchased with her money, and murdered. her there. The body he buried in a ditch in the farm-yard, and While continuing to reside in the place, he by means of forging her handwriting managed to get nearly the whole of the dead woman's fortune into his clutches. But it was the forgery and the gossip raised through the • countryside by the sudden disappearance of Miss Holland that led to the murderer's detection three years after-the murder.

So far this is but a story of blood and vice, but the interest of it all lies in the interplay of the two protagonists in the death-drama. On the one side is an eminently respectable Victorian spinster—pious, conventional, but suffering (it would almost seem) from sexual repression in the drab atmosphere of the boarding-houses which were her home. Into the life of " this timid, precise, elderly woman " there enters by a mere chance a vulgarly genial sadist—one who had spent the leisure moments of his career in the ranks of the Army in the pursuit and possession of women. Dougal's quality of rude virility and insinuating address appealed to this faded spinster, who was fond of admiration, but the rela- tions of the pair did not continue for long : :three weeks after they had crossed the moat of Coldhams Farm Miss Holland's body was lying buried in a ditch, covered with pond-mud and blackthorn branches.

A sordid story enough ; but interesting to the psycho- pathologist, if only for the extraordinary revelation of character contained in certain letters which Dougal wrote from gaol to some of his lady-friends (to use the terminology of- his class). He writes to a Miss L— lamenting that it is not possible for them to have " a run round together," because

" I am not disengaged now." He was not ; he was at the moment fulfilling a very pressing engagement in Chelmsford gaol whence he never emerged. To a second lady-friend, who has just been delivered of a child of his, he suggests that the various girls whom he had also seduced in the neighbourhood, and who would be called as witnesses at his trial in Chelms- ford, " should club together and hire a trap and drive all the way. It is a delightful drive through undulating country, and at this time of the year it would be a veritable treat for them all."

Such are the details, together with a full report of the coroner's inquest, investigation before the magistrates and the final trial, which Miss Tennyson Jesse in a strong, quietly written introduction presents to her readers.