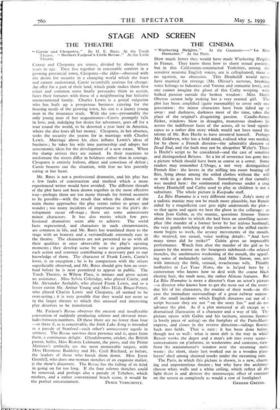 Wuthering Heights." At the Gaumont-" La Bête Humaine." At the Paris.

How much better they would have made Wuthering Heights in France. They know there how to shoot sexual passion ; but in this Californian-constructed Yorkshire, among the sensitive neurotic English voices, sex is cellophaned; there is no egotism, no obsession. This Heathcliff would never have married for revenge (Mr. Olivier's nervous, breaking voice belongs to balconies and Verona and romantic love), and one cannot imagine the ghost of this Cathy weeping with balked passion outside the broken window : Miss Merle Oberon cannot help making her a very normal girl. The plot has been simplified (quite reasonably) to cover only one generation : the minor characters have been tidied up or away : and darkness, darkness most of the time, takes the place of the original's disquieting passion. Candle-flames flicker, windows blow in draughts, monstrous shadows lie across the indifferent faces of the actors, all to lend signifi- cance to a rather dim story which would not have taxed the talents of Mr. Ben Hecht to have invented himself. Perhaps Mr. Goldwyn, who has a bold mind, realised what was needed, for he chose a French director—the admirable director of Dead End, and the fault may not be altogether Wyler's. There is Hecht's script to be considered—and the cast of sensitive and distinguished Britons. So a lot of reverence has gone into a picture which should have been as coarse as a sewer. Some readers may remember L'Orage, a not very distinguished French film : the lovers in the stifling inn room beating off flies, lying about among' the soiled clothes without the will or wish to go down for meals. Something of that carnality was needed here: the sentimental rendezvous under a crag where Heathcliff and Cathy used to play as children is not a substitute. The whole picture is Keepsake stuff.

La Bite Humaine is a very different matter : Zola's story of a sadistic maniac may not be much more plausible, but Renoir aided by a magnificent cast gets right underneath the plot— so that again and again we hear the ghost in the cellarage: as when Jean Gabin, as the maniac, questions Simone Simon about the murder to which she had been an unwilling accom- plice (the murder of a former lover by her jealous husband), the very gentle twitching of the eyebrows as the stifled excite- ment begins to work, the uneasy movements of the mouth, the strained, too casual, voice seeking details : " And how many times did he strike?" Gabin gives an impeccable performance. Watch him after the murder of the girl as he pauses by the mirror on the bourgeois sideboard—the relaxed muscles, the unobtrusive weakening of the mouth, the appall- ing sense of melancholy satiety. And Mlle Simon, too, acts with intensity the little, sensual, treacherous wife. Pitiably ineffective in Les Yeux Noirs, she is helped here by a cameraman who knows how to deal with the coarse black electric hair, the snub nose, the rather African features. But La Bete Humaine is more a director's than an actor's picture —a director who knows how to get the most out of the every- day life of his characters, the routine of their work—in this case the immediate surroundings of a great railway station : all the small incidents which English directors cut out of a script because they are not " on the story line " and do not advance the plot. As if a plot mattered at all except as a dramatised illustration of a character and a way of life. The picture opens with Gabin and his taciturn, anxious fireman (a lovely piece of acting) on the footplate of the Paris-Havre express, and closes in the reverse direction—sidings flowing back into fields. That is easy : it has been done before though not so well : what is most deft is the way in whicl- Renoir works the depot and a man's job into every scene— conversations on platforms, in washrooms and canteens, viev, from the stationmaster's window over the steaming meta waste : the short, sharp lust worked out in a wooden plate- layers' shed among shunted trucks under the streaming rain.

The Paris, in which this picture is shown, is a new, charm ing and unpretentious theatre ; but why have the architect, chosen white walls and a white ceiling, which reflect all the light there is and destroy the stereoscopic effect of exteriors on the screen as completely as would a row of footlights?