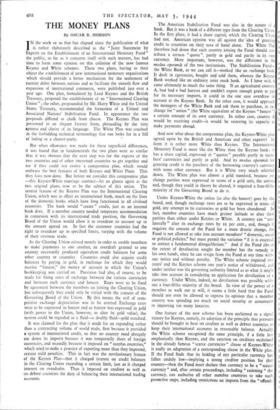 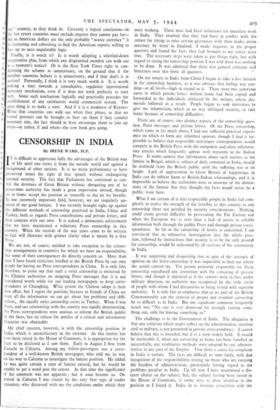 IN the week or so that has elapsed since the publication of what is rather elaborately described as the "Joint Statement by Experts on the Establishment of an International Monetary Fund" the public, so far as it concerns itself with such matters, has had time to form some opinion on this collation of the now famous Keynes and White schemes. These two plans, having as their object the establishment of new international monetary organisations which should provide a better mechanism for the settlement of current debts between nations and so facilitate the smooth flow and expansion of international commerce, were published just over a year ago. One plan, formulated by Lord Keynes and the British Treasury, proposed the establishment of an "International Clearing Union " ; the other, propounded by Mr. Harry White and the United States Treasury, recommended the formation of a United and Associated Nations' Stabilisation Fund. In appearance the two proposals differed as chalk from cheese. The Keynes Plan was presented in an elegant literary form, ptrsuading by the very aptness and clarity of its language. The White Plan was couched in the forbidding technical terminology that one looks for in a bill of lading or a charter-party.

But when allowance was made for these superficial differences, it was found that in fundamentals the two plans were so similar that it was obvious that the next step was for the experts of the two countries and of other interested countries to get together and see if they could not evolve a compromise plan, which would embrace the best features of both Keynes and White Plans. This they have now done. But before we consider this compromise plan —this Keynes-White marriage contract—let us glance again at the two original plans, now to be the subject of this union. The central feature of the Keynes Plan was the International Clearing Union, which was in effect an international bank, much on the lines of the domestic banks which have long functioned in all civilised countries. The bank would " create " credit, just as an internal bank does. If a member country needed temporary accommodation in connexion with its international trade position, the Governing Board of the Union would allow it to overdraw its account up to the amount agreed on. In fact the customer countries had the right to overdraw up to specified limits, varying with the volume of their overseas trade.

As the Clearing Union existed merely in order to enable members to make payments to one another, an overdraft granted to one country necessarily produced equivalent credit balances for some other country or countries. Countries could also acquire credit balances by paying in gold, in exchange for which they would receive "bancor," the money of account in which the Union's bookkeeping was carried on. Provision had also, of course, to be made for fixing rates of exchange between the various currencies and between each currency and bancor. Rates were to be fixed by agreement between the members on joining the Clearing Union, but subsequently they could only be varied with the consent of the Governing 13oard of the Union. By this means the evil of com- petitive exchange depreciation was to be averted. Exchange rates were to be expressed in bancor and as bancor was expressed in gold (with power to the Union, however, to alter its gold value), the system could be regarded as a fluid—a doubly fluid—gold standard.

It was claimed for the plan that it made for an expanding rather than a contracting volume of world trade, first because it provided a system of international credit, so that no country need abruptly cut down its imports because it was temporarily short of foreign currencies, and secondly because it imposed on "surplus countries," which tried to make a practice of exporting more than they imported, certain mild penalties. This in fact was the revolutionary feature of the Keynes Plan—that it charged interest on credit balances in the Clearing Union exceeding a certain limit, just as it charged interest on overdrafts. Thus it imposed on creditor as well as on debtor countries the duty of balancing their international trading accounts.

The American Stabilisation Fund was also in the nature of a bank. But it was a bank of a different type from the Clearing Union. In the first place, it had a share capital, which the Clearing Union had not. American 'opinion was all against the ' idea of granting credit to countries on their note of hand alone. The White Plan therefore laid down that each country joining the Fund should con- tribute a certain "quota ", partly in gold and partly in its own currency. More important, however, was the difference in the modus operandi of the two institutions. The Stabilisation Fund— the White Bank, as we can call it—worked like an exchange bank. It dealt in currencies, bought and sold them, whereas the Keynes Bank worked like an ordinary joint stock bank. As I have said, it came ultimately to much the same thing. If an agricultural country, A, had had a bad harvest and couldn't export enough grain to pay for its necessary imports, it could in the one case overdraw its account at the Keynes Bank. In the other case, it would approach the managers of the White Bank and ask them to purchase, in ex- change for " unitas " (the White equivalent of the Keynes "bancor '') a certain amount of its own currency. In either case, country A would be receiving credit—it would be restoring its capacity to make payments abroad.

And now what about the compromise plan, the Keynes-White plan agreed upon by the British and American and other experts? In form it is rather more White than Keynes. The International Monetary Fund is more like the White than the Keynes bank : it has a share capital, expressed in " quotas " payable partly in mem- bers' currencies and partly in gold. And its modus operandi for granting credit is the purchase of the borrowing country's currency with some other currency. But it is White very much whittled down. The White plan was almost a gold standard, because ex- change parities were expressed in terms of a gold unit, the unitas, and, though they could in theory be altered, it required a four-fifths majority of the Governing Board to do it.

Under Keynes-White the unitas (as also the bancor) goes by the board, and, though exchange rates are to be expressed in terms of gold, any attempt to tie currencies to gold has been abandoned In fact, member countries have much greater latitude to alter their parities than either under Keynes or White. A country can " uni- laterally " alter its exchange rates by to per cent., and, though it requires the consent of the Fund for a more drastic change, the Fund is not allowed to take into account members' "domestic, social or political policies," but must permit the variation "if it is essential to correct a fundamental disequilibrium." And if the Fund jibs at the extent of devaluation sought the member has the remedy in his own hands, since he can resign from the Fund at any time with- out notice and without penalty. The White scheme required two years' and the Keynes scheme one year's notice of withdrawal, and under neither was the governing authority limited as to what it might take into account in considering an application for devaluation of a currency. Under White, indeed, no devaluation was possible with- out a four-fifths majority of the board. In view of the power of a member to walk out at will, it seems a little hard that the Fund should not even be allowed to express its opinion that a member country was spending too much on social security or armaments or importing too many luxuries.

One feature of the new scheme has been acclaimed as a signal victory for Keynes, namely, its adoption of the principle that pressure should be brought to bear on creditor as well as debtor countries to keep their international accounts in reasonable balance. Actually the White scheme recognised the same principle, if a little less emphatically than Keynes, and the sanction on creditors enshrined in the already famous "scarce currencies" clause of Keynes-White is really an adaptation of a corresponding clause in the White plan. If the Fund finds that its holding of any particular currency has fallen unduly low—implying a strong creditor position for that country—then the Fund must declare that currency to be a "scarce currency" and, after certain proceedings, including " rationing " the currency, can authorise all other member countries to take such protective steps, inducting restrictions on imports from the "offend- mg " country, as they think fit. Certainly a logical conclusion—in the last resort countries must exclude imports they cannot pay for— but as American dollars are the only probable "scarce currency" it is interesting and refreshing to find the American experts willing to face up to sucn unpalatable logic.

Finally, is it worth it? Is it worth adopting a whittled-down compromise plan, from which any disgruntled member can walk out at a moment's notice? Or is the New York Times right in con- demning the scheme as unnecessary, on the ground that if the member countries behave it is unnecessary, and if they don't it is useless? Personally, I think it is very much worth it. It is worth making a start towards a consultative, regulative international monetary mechanism, even if it does not work perfectly to start with. Some such mechanism logically and practically precedes the establishment of any satisfactory world commercial system. The great thing is to make a start. And if it is a weakness of Keynes- White that countries can walk out when they please, so that no formal pressure can be brought to bear on them if they commit monetary sins, the fact should at least encourage them to join up when—or rather, if and when—the new bank gets going.