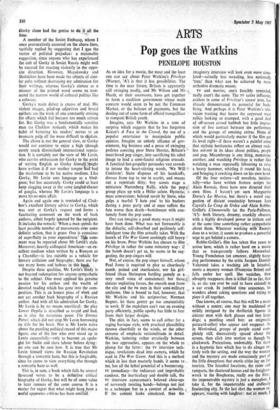 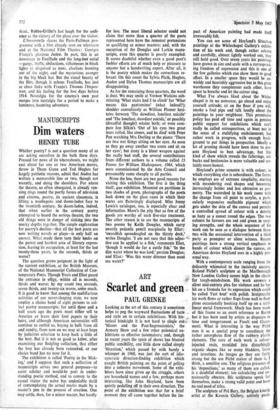 As an idea for a movie, the most and the least one can say about Peter Watkins's Privilege (Warner, 'A') is that it has possibilities. The time is the near future, Britain is apparently still swinging madly, and Mr Wilson and Mr Heath, or their successors, have got together ' to form a coalition government whose main concern would seem to be not the Common Market, or the balance of payments, but the dealing out of some form of official tranquilliser to rampant British youth.

Imagine, says Mr Watkins in a tone of surprise which suggests that he has forgotten Kazan's A Face in the Crowd, the use of a popular entertainer to manipulate public opinion. Imagine an unholy alliance of gov- ernment, big business and a posse of swinging prelates coercing poor Steve Shorter, Britain's 'I most-loved pop singer, into sacrificing his rebel image to lead a semi-fascist religious crusade. A fanatical hot-gospeller persuades vast crowds to intone the heart-stirring words, 'We Will Conform'; Steve disposes of his handcuffs, dresses from top to toe in scarlet, and moans out a repentant ditty; boy scouts stage a miniature Nuremberg Rally, while the popf group plays up with a Hitler salute. Hysteria; , mass conversions; belated revolt by Steve, who gulps a tearful 'I hate you' to his backers during a press party and at once suffers the fate worse than death—banishment with con- tumely from the pop scene.

One can imagine a good many ways it might have been done. What was not foreseeable is the didactic, self-absorbed and perilously self- indulgent tone the film actually takes. With the laurels of The War Game seemingly still heavy on his brow, Peter Watkins has chosen to film Privilege in rather the same minatory way: if - the bomb doesn't get us, he seems to be sug- gesting, the pop singers will.

Not, of course, the pop singer himself, whom Paul Jones is required to play as cheerlessly numb, pained and inarticulate; nor his girl- friend (Jean Shrimpton battling gamely as a. very small voice of conscience); but those' sinister exploiting forces, the smooth men from- the city and the PR men in their semi-military uniforms. One is bound to feel, however, that - Mr Watkins and his scriptwriter, Norman Bogner, let these gentry go too amateurishly to work. If the exploiters can't run an evening party efficiently, public apathy has little to fear from their larger designs.

The plot, in fact, seems to call either for a raging baroque style, with practical plausibility thrown cheerfully to the winds, or the other extreme of emphatic verisimilitude in detail. Watkins, teetering rather erratically between the two approaches, appears on the whole to plump for the latter: the TV interview tech- nique, revelations dead into camera, which he used in The War Game. And this is a method which in less than masterly hands, it seems to me, has all the lethal potential of a boomerang. TV immediacy—the indiscreet and improbable candour, the inarticulacy and double talk, the TV interview cameraman's beloved close-ups of nervously twisting hands—belongs not just to a technique but to a conteatt of actuality. z If the context looks simulated, then the imaginary interview will look even more simu- lated—actually less revealing, less notionally 'true,' than what can be achieved by. more orthodox dramatic means.

Tv and movies, one's forcibly reminded, really aren't the same. The Tv satire influence, evident in some IA Privilege's sourer jests, has already demonstrated its potential for back- firing. And perhaps it is Peter Watkins's tele- vision training that leaves the supposed mass rallies looking so cramped, with a good deal of off-screen crowd hubbub but little impres- sion of live contact between the performers and the groups of emoting extras. None of which would particularly matter if the film got its level right—if there weren't a painful sense that stylistic hesitancies reflect an almost reck- less naiveté in its ideas about politics, people and pop. Misanthropy is one thing, monotony another; and watching Privilege is rather like watching a man repeatedly labouring to raise a heavy hammer, whirling it round his head, and bringing it crashing down on his own hand.

Of the four writers—all novelists, inciden- tally—who have written feature scripts for Alain Resnais, three have now directed their own films. I haven't yet seen Marguerite Duras's La Musica, but there's a weird sug- gestion of distant" cousinship between Jean Cayrol's Le Coup de Grace and Alain Robbe- L'Immortelle (at the Paris-Pullman, 'Al: both• literary, dreamy, crankily obscure, with a highly developed power to irritate and at the same time something rather sympathetic about them. Whatever working with Resnais does to a writer, it seems b--produce a powerful urje to get behind a camera.

obbe-Grillet's film has taken five years to arrive here, which is rather hard on a movie that so transparently follows Marienbad. Young Frenchman (an amateur, slightly hang- dog performance by the critic Jacques Doniol- Vakroze) takes a teaching job in Istanbul, meets a mystery woman (Francoise Brion) and falls under her Spell. She vanishes, then abruptly reappears, then is killed (in so far, that is, as shc can ever be said to have existed) in a car crash. In jumbled time sequences, he wanders about asking questions and trying to piece it all together.

One knows, of course, that this will be a maze without a centre; one may be maddened or mildly intrigued by the thrillerish figures (a sinister man with dark glasses and two large dogs; a puzzling small boy; an enigmatic postcard-seller) who appear and reappear. As in Marienbad, groups of people stand com- pletely still, decoratively spaced about the screen, then click into motion as though by clockwork. Pretentious, undeniably. Yet there is a hypnotic lure which has to do almost en- tirely with the setting, and the way the woman and the mystery are made consciously part of the little deceptions that exotic cities layf on for tourists. The Istanbul locations, the ruins and ramparts, the shuttered houses and the freighter- wreck in the Bosphorus, really are the film: the impenetrable mystery is just a metaphor, take it, for the impepetrable and endlessly fascinating city. In the last shot the woman re- appears, roaring with laughter: not so much, I think, Robbe-Grillet's last laugh for the audi- ence as the victory of the place over the visitor.

L'lmmortelle shares the Paris-Pullman pro- gramme with a film already seen on television and at the National Film Theatre: Georges Franju's glorious Judex. In part, this is an hommage to Feuillade and the long-lost serial —gangs, thefts, abductions, villainesses in black tights or disguised as nuns, alsatians looming out of the night, and the mysterious avenger in the big black hat. But the visual beauty of the film, though it echoes Feuillade, has just as close links with Franju's Thomas l'Impos- teur, and his feeling for the lost days before 1914. Nostalgia for the cinema's own past merges into nostalgia for a period to make a luminous; haunting adventure.