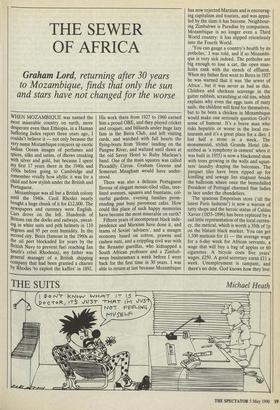 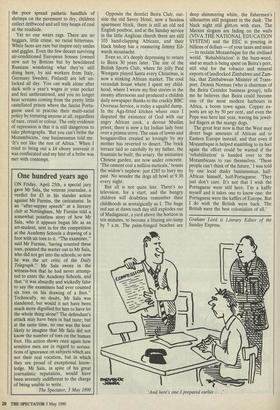 THE SEWER OF AFRICA

to Mozambique, finds that only the sun and stars have not changed for the worse

WHEN MOZAMBIQUE was named the most miserable country on earth, more desperate even than Ethiopia, in a Human Suffering Index report three years ago, I couldn't believe it — not only because the very name Mozambique conjures up exotic Indian Ocean images of perfumes and spices, silks and satins, of dhows creaking with silver and gold, but because I spent my first 17 years there in the 1940s and 1950s before going to Cambridge and remember vividly how idyllic it was for a child and how stylish under the British and Portuguese.

Mozambique was all but a British colony until the 1940s. Cecil Rhodes nearly bought a huge chunk of it for £12,000. The newspapers and currency were English. Cars drove on the left. Hundreds of Britons ran the docks and railways, sweat- ing in white suits and pith helmets in 110 degrees and 95 per cent humidity. In the second city, Beira (famous in the 1960s as the oil port blockaded for years by the British Navy to prevent fuel reaching Ian Smith's rebel Rhodesia), my father was general manager of a British shipping company that had been granted a charter by Rhodes 'to exploit the kaffirs' in 1892. His work there from 1927 to 1960 earned him a proud OBE, and they played cricket and croquet, and billiards under huge lazy fans in the Beira Club, and left visiting cards, and watched with full hearts the flying-boats from 'Home' landing on the Pungwe River, and waltzed until dawn at the old Savoy Hotel to Ruby Maclean's band. One of the main squares was called Piccadilly Circus. Graham Greene and Somerset Maugham would have under- stood.

There was also a delicate Portuguese flavour of elegant mosaic-tiled villas, tree- lined avenues, squares and fountains, col- ourful gardens, evening families prom- enading past busy pavement cafes. How could this place of such happy memories have become the most miserable on earth?

Fifteen years of incompetent black inde- pendence and Marxism have done it, and teams of Soviet 'advisers', and a meagre economy based on cotton, prawns and cashew nuts, and a crippling civil war with the Renamo guerillas, who kidnapped a South African professor and a Zimbab- wean businessman a week before I went back for the first time in 30 years. I was able to return at last because Mozambique has now rejected Marxism and is encourag- ing capitalism and tourists, and was appal- led by the slum it has become. Neighbour- ing Zimbabwe is Paradise by comparison. Mozambique is no longer even a Third World country: it has slipped relentlessly into the Fourth World.

'You can gauge a country's health by its potholes,' I was told, and if so Mozambi- que is very sick indeed. The potholes are big enough to lose a cat, the open man- holes rank with the stench of effluent. When my father first went to Beira in 1927 he was warned that it was 'the sewer of Africa', but it was never as bad as this. Children and chickens scavenge in the gutter rubbish, scratching at old tins, which explains why even the eggs taste of rusty nails: the children will fend for themselves, but to be born a chicken in Mozambique would make one seriously question God's sense of humour. It's a brave man who risks hepatitis or worse in the local res- taurants and it's a great place for a diet: I lost half a stone in a week. The monumental, stylish Grande Hotel (de- scribed as 'a symphony in cement' when it was built in 1955) is now a blackened slum with trees growing in the walls and squat- ters' laundry draping the balconies. The parquet tiles have been ripped up for kindling and sewage lies stagnant beside the ballroom where once the bemedalled President of Portugal charmed fine ladies in lace under the chandeliers.

The spacious Emporium store Call the latest Paris fashions') is now a warren of tatty shops and the heroic statue of Caldas Xavier (1853-1896) has been replaced by a sad little representation of the local curren- cy, the metical, which is worth a 35th of 1p on the blatant black market. You can get 3,500 meticais for £1 — the average wage for a 6-day week for African servants, a wage that will buy a bag of apples or 60 cigarettes. A bicycle costs five years' wages, £250. A good secretary earns £11 a week. Unemployment is rampant, and there's no dole. God knows how they live: the poor spread pathetic handfuls of shrimps on the pavement to dry, children collect driftwood and sell tiny heaps of coal at the roadside.

Yet no one wears rags. There are no beggars, little crime, no racial bitterness. White faces are rare but inspire only smiles and giggles. Even the few decent surviving air-conditioned European houses (owned now not by Britons but by bewildered Russians wondering what they're still doing here, by aid workers from Italy, Germany Sweden, Finland) are left un- locked all day. You can walk alone after dark with a year's wages in your pocket and feel unthreatened, and you no longer hear screams coming from the pretty little castellated prison where the fascist Portu- guese used to practise their multi-racial policy by torturing anyone at all, regardless of race, creed or colour. The only evidence of repression is that it is still dangerous to take photographs. 'But you can't bribe the Mozambicans,' one businessman told me. 'It's not like the rest of Africa.' When I tried to bring out a £4 ebony souvenir it was confiscated and my hint of a bribe was met with contempt. Opposite the derelict Beira Club, out- side the old Savoy Hotel, now a faceless apartment block, there is still an old red English postbox, and at the Sunday service in the little Anglican church there are still 103 hand-clapping Africans, and their black bishop has a reassuring Jimmy Ed- wards moustache.

Even so, it's deeply depressing to return to Beira 30 years later. The site of the British Sports Club, where fat jolly Paul Westgate played Santa every Christmas, is now a stinking African market. The cool verandah house where I spent my child- hood, where I wrote my first stories in the steamy afternoons and produced a childish daily newspaper thanks to the crackly BBC Overseas Service, is today a squalid dump. In the Aga-fitted kitchen where once I disputed the existence of God with our angry African cook, a devout Muslim priest, there is now a fat Indian lady bent over a primus stove. The oasis of lawns and bougainvillea created so lovingly by my mother has reverted to desert. The brick terrace laid so carefully by my father, the fountain he built, the aviary, the miniature Chinese garden, are now under concrete. 'The cement cost a million meticais,' boasts the widow's nephew: just £285 to bury my past. No wonder the dogs all howl at 9.30 every night.

But all is not quite lost. There's no television, for a start, and the hungry children will doubtless remember their childhoods as nostalgically as I. The huge red sun at dawn each day still explodes out of Madagascar, a yard above the horizon in ten minutes, to become a blazing arc-lamp by 7 a.m. The palm-fringed beaches are deep shimmering white, the fishermen's silhouettes still poignant in the dusk. The black night still glittdrs with stars. The Marxist slogans are fading on the walls (VIVA THE NATIONAL EDUCATION SYSTEM) and the EEC is pouring in billions of dollars — of your taxes and mine — to reclaim Mozambique for the civilised world. 'Rehabilitation' is the buzz-word, and so much is being spent on Beira's port, still vital for the tobacco and mineral exports of landlocked Zimbabwe and Zam- bia, that Zimbabwean Minister of Trans- port, Dennis Norman (who is chairman of the Beira Corridor business group), tells me he believes that Beira could become one of the most modern harbours in Africa, a boom town again. Copper ex- ports are up by 50 per cent, and even the Pope was here last year, waving his jewel- led fingers at the mangy dogs.

The great fear now is that the West may divert huge amounts of African aid to Eastern Europe instead, and that even if Mozambique is helped stumbling to its feet again the effort could be wasted if the 'rehabilitation' is handed over to the Mozambicans to run themselves. 'These people can't think of the future,' I was told by one local dusky businessman, half- African himself, half-Portuguese. 'They just don't care. It's not that I wish the Portuguese were still here. I'm a kaffir myself and it takes one to know one: the Portuguese were the kaffirs of Europe. But I do wish the British were back. The British were the best colonialists of all.'

Graham Lord is Literary Editor of the Sunday Express.