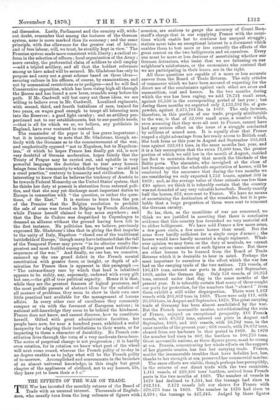 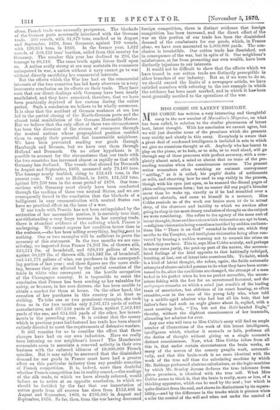 THE EFFECTS OF THE WAR ON TRADE.

THE War has invested the monthly returns of the Board of Trade with an unusual interest. Thousands of English- men, who usually turn from the long columns of figures with

aversion, are anxious to gauge the accuracy of Count Bern- storff's charge that in our supplying France with the muni- tions which enable her to continue her unequal struggle ; statists must take an exceptional interest in a document which enables them to test more or less correctly the effects of the great contest on the two belligerents and on ourselves. Every one must be more or less desirous of ascertaining whether our German detractors, who insist that we are fattening on our neighbour's misfortunes, or the economists who contend that we are participating in their losses, are in the right.

All these questions are capable of a more or less accurate answer from the Board of Trade Returns. The only articles of commerce which we have been accused of exporting for the direct use of the combatants against each other are arms and ammunition, coal and horses. In the two months during which the war has been raging, we sold 78,721 small arms, against 46,530 in the corresponding period of last year ; but during these months we exported only 2,133,382 lbs. of gun- powder, against 2,475,7011bs. in 1869. The only increase, therefore, in this portion of our trade, properly attributable to the war, is that of 32,000 small arms, a number which, even assuming that they were all sent to France, cannot have had any serious effect on the issue of a struggle conducted by millions of armed men. It is equally clear that France reaped a slight advantage from her ready access to British coal. She took from us this year in August and September 393,031 tons against 322,014 tons, in the same months last year, and it is a fair assumption that the extra 71,000 tons, the greater portion of which we sold her in the month of August, enabled her fleet to maintain during that month the blockade of the Baltic ports. The alarmists, who inveighed at the close of last Session against the wholesale exportation of horses, will be comforted by the assurance that during the two months we are considering we only exported 1,752 beasts, against 303 in 1869; and, as the average value of these animals was less than £40 apiece, we think it is tolerably certain that the country was not denuded of any very valuable horseflesh. Nearly exactly half the horses, 872, were sent to France. We have no means of ascertaining the destination of the remainder, but it is pro- bable that a large proportion of them were sent to remount the German cavalry.

So far, then, as the munitions of war are concerned, we think we are justified in asserting that there is conclusive evidence that this country has furnished no very material aid

arms were hardly sufficient for a single corps d'armtie ; the horses would have hardly mounted a single regiment. What- ever opinion we may form on the duty of neutrals, we cannot feel any serious uneasiness at such figures as these. But there are other lessons to be learned from the Board of Trade Returns which it is desirable to bear in mind. Perhaps the most important to ourselves is the effect which the war has had on the carrying trade of the two nations. 725 vessels, of 196,419 tons, entered our ports in August and September, 1869, under the German flag. Only 151 vessels, of 38,953 tons, entered under that flag in the same months of the present year. It is tolerably certain that many of these sought our ports for protection, for the numbers that " cleared " from them exhibit a still wider disproportion. There were 1,167 vessels with 261,892 tons in 1869. There were only 111, with 26,663 tons, in August and September, 1870. The great carrying trade of Germany has been almost annihilated by the war. But the French mercantile marine, notwithstanding the ruin of France, enjoyed an exceptional prosperity, 416 Frenck vessels, with 40,372 tons, entered our ports in August and September, 1869, and 405 vessels, with 50,782 tons, in the same months of the present year ; 668 vessels, with 78,832 tone, cleared from our harbours in that period in 1869. In 1870 the number had risen to 862, the burthen to 100,759 tons. Great mercantile nations, as these figures prove, must be strong at sea. Prussia, concentrating her whole efforts on the support of her gigantic armies, has lost her carrying trade. France, amidst the innumerable troubles that have befallen her, has, thanks to her strength at sea, preserved her commercial marine.

The same effects are visible, though perhaps less perceptibly, in the returns of our direct trade with the two countries. 1,411 vessels, of 229,406 tons' burthen, arrived from French ports in the two months of 1869. The number of vessels in

alone, French trade was unusually prosperous. The blockade of the German ports necessarily interfered with the German trade. 366 vessels, with 91,879 tons, reached us in August and September, 1870, from Germany, against 709 vessels, with 120,954 tons, in 1869. In the former year, 1,622 vessels, of 348,132 tons' burthen, sailed from this country for Germany. The number this year has declined to 296, the tonnage to 80,116. The same truth again forces itself upon us. A nation really strong at sea may maintain its commerce unimpaired in war, a nation without a navy cannot go to war without directly sacrificing her commercial interests.

But the effects which the War has had on the commercial interests of the two countries has led hasty observers to a very inaccurate conclusion on its effects on their trade. They have seen that our direct dealings with Germany have been nearly annihilated, and they have conceived, therefore, that we have been practically deprived of her custom during the entire period. Such a conclusion we believe to be wholly erroneous. It is clear that the accident of German weakness at sea has led to the partial closing of the North-German ports and the almost total annihilation of the German Mercantile Marine. But we believe that the only effect of these two circumstances has been the diversion of the stream of commerce through the neutral nations whose geographical position enabled them to supply their powerful but inaccessible neighbour. We have been prevented sending our goods through Hamburgh and Bremen, but we have sent them through Holland and Denmark. On no other hypothesis is it possible to account for the circumstance that our trade with the two countries has increased almost as rapidly as that with Germany has declined. The vessels that cleared for Denmark in August and September, 1869, measured only 79,189 tons. The tonnage nearly doubled, rising to 153,441 tons, in the present year. We sent to Holland, in 1869, 131,532 tons, against 199,709 tons in the same period of 1870. Our tran- sactions with Germany must clearly have been conducted through the medium of these two neutral States, and we are consequently forced to the conclusion that the blockade of a belligerent in easy communication with neutral States can have no practical effect on the issue of a war.

If our trade with Prussia has not been extinguished by the extinction of her mercantile marine, it is certainly true that, notwithstanding a very large increase in her carrying trade, there is abundant evidence of the suffering which France is undergoing. We cannot express her condition better than in the sentence,—she has been selling everything, buying,next to nothing. One or two examples will be sufficient to prove the accuracy of this statement. In the two months we are con- sidering, we imported from France 74,707 lbs. of thrown silk, 523,374 lbs. of broadstuff, and 628,199 gallons of wine, against 50,129 lbs. of thrown silk, 344,182 lbs. of broadstuff, and 541,771 gallons of wine, our purchases in the correspond- ing portion of last year ; and these figures are the more strik- ing, because they are affected by the partial cessation of the trade in white wine consequent on the hostile occupation of the Champagne country. It is impossible to resist the conclusion that France has been sending us her valuables for safety, or because, in her sore distress, she has been unable to obtain a market for them at home. On the other hand, the cessation of her purchases in this country is at least as striking. To take one or two prominent examples, she took from us in the two months only 2,707,474 yards of cotton manufactures, and 360,548 yards of linen, against 7,562,193 yards of the one, and 634,605 yards of the other, her invest- ments in the preceding year. It is evident that the money which in previous years had fostered her trade has been almost entirely directed to meet the requirements of defensive warfare.

It still remains for us to consider the effect that these changes have had on our own industries. Have we really been fattening on our neighbour's losses ? The Manchester economists seem to associate a renewed activity in their own business with the enforced idleness of 10,000,000 French spindles. But it may safely be answered that the diminished demand for our goods in France must have had a greater effect on this particular industry than any possible cessation of French competition. It is, indeed, more than doubtful whether French competition has in reality ceased,—the analogy of the silk trade, to which we have already referred, would induce us to arrive at an opposite conclusion, in which we should be fortified by the fact that our importation of cotton goods from all sources has risen from £152,406 in August and September, 1869, to £195,585 in August and September, 1870. So far, then, from the war having decreased foreign competition, there is distinct evidence that foreign competition has been increased, and the direct effect of the war on this portion of our trade has been the diminished demand of the combatants for our goods, which, in France alone, we have seen amounted to 5,000,000 yards. The con- clusion is irresistible. Our cotton trade has flourished, not in consequence of the war, but in spite of it. Our neighbour's misfortunes, so far from promoting our own wealth, have been distinctly injurious to our interests.

It would not be difficult to show that the effects which we have traced in our cotton trade are distinctly perceptible in other branches of our industry. But as, if we were to do so, we should exceed the limits of a newspaper article, we have satisfied ourselves with referring to the one example in which the evidence has been most marked, and in which it has' been most generally ascribed to the operations of the war.