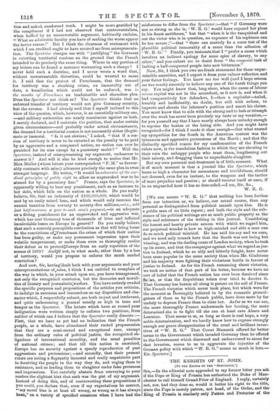 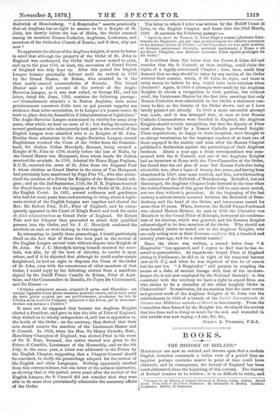 THE KNIGHTS OF ST. JOHN.

[TO THE EDITOR OF THE "SPECTATOR.") SIR,—In the editorial note appended to my former letter you ask. if the Pope or King of Prussia has authorized the Duke of Man- chester to call himself Grand Prior of England. I reply, certainly not, nor, had they done so, would it better his right to the title, since the Pope is merely patron, not head, of the Order, and the- King of Prussia is similarly only Patron and Protector of ther

Bailiwick of Brandenburg. "A Hospitaller" asserts practically that an Anglican has no right to assume to be a Knight of St. John, but shortly before the loss of Malta, the Order counted among its members Roman Catholics, Anglicans, Lutherans, and members of the Orthodox Church of Russia ; and if then, why not now ?

To appreciate the claims of the Anglican knights, it must be borne

in mind that although the property of the Order of St. John in England was confiscated, the Order itself never ceased to exist, and up to the year 1701, at least, the succession of Grand Priors of England was duly kept up. After this period the English Langue became practically defunct until its revival in 1782 by the Grand Master, de Rohan, who annexed to it the then newly-created commanderies of Bavaria. The Grand [aster sent a full account of the revival of the Anglo- Bavarian Langue, as it was now called, to George III., and his letter, dated 8th Jane, 1782, contains the following passage : —" Eternellement attaches n la Nation Anglaise, nous avons precieusement conserves d'elle tout ce qui pouvait rappeler son ,existence dans notre association, et la Langue n'a jamais cessee de

tenir sa place dans les Assemblies d'Administration et legialatives." The Anglo-Bavarian Langue maintained its vitality for some sixty years, after which we hear no more of it ; but during its existence =several gentlemen who subsequently took part in the revival of the English Langue were admitted into it as Knights of St. John. Besides these admissions in the Anglo-Bavarian Langue, several Englishmen received the Cross of the Order from the fountain- head, Sir Joshua Callen Meredyth, Baronet, being created a Knight of St. John in 1798, shortly before the loss of Malta, by the Grand Master von Hompesch, from whose hands Sir Joshua received the accolade. In 1799, Admiral Sir Home Riggs Popham, K.C.B., received the cross of St. John from the Emperor Paul I. whose election as Grand Master in the room of Von Hompesch had previously been sanctioned by Pope Pius VI., who also autho- rized the creation of a Priory for Knights of the Russo-Greek reli- gion; and on the 2nd September, 1799, Sir H. R. Popham received -the Royal licence to wear the insignia of the Order of St. John at the English Court. In 1831, several noblemen and gentlemen who had for some years been endeavouring to bring about a legiti- mate revival of the English Langue met together and elected the Rev. Sir Robert Peat, D.D., Prior of England, and he subse-

lnently appeared in the Court of King's Bench and took the oaths .de.fideli administratione as Grand Prior of England. Sir Robert

Peat and his Chapter then proceeded to admit duly qualified persons into the Order, and Sir J. C. Meredyth conferred the accolade on such as were lacking in this respect.

In attempting to justify these proceedings, I would particularly -dwell on the fact that of those who took part in the revival of the English Langue several were without dispute true Knights of St. John. Sir J. C. Meredyth having himself received the acco- lade, was able, by all the laws of chivalry, to confer it upon -others, and if it be objected that although he could confer simple flenighthood, he had no right to dispense the Cross of the Order of St. John, even with the concurrence of other members of that

'Order, I would reply by the following extract from a manifesto -signed by the Bailiff Prince Camille de Rohan, Prior of Aqui- taine, and the Commanders de Bataille, De Peyre De Chlteauneuf,

It must not be supposed that because the Anglican Knights -elected a President, and gave to him the title of Prior of England,

they wished to be wholly independent of, still less in opposition to, the heads of the Order ; on the contrary, they desired that their acts should receive the sanction of the Lieutenant-Master and -S. Council. In 1838, when the Hon. Sir Henry Dymoke, Bart., Hereditary Champion of England, was elected Prior in the room -of Sir R. Peat, deceased, due notice thereof was given to the Prince di Candida, Lieutenant of the Mastership, and on the 8th July, in the same year, a letter was addressed to the Prince by the English Chapter, suggesting that a Chapter-General should be convoked, to ratify the proceedings adopted for the revival of the English and other Languages. Nothing apparently resulted from this correspondence, but one letter of the series is instructive, ..es showing that at this period, seven years after the revival of the

English Langue, the S. Council did not consider that they were able to do more than provisionally administer the necessary affairs of the Order.

The letter to which I refer was written by the Bailiff Count di Litta, to the English Chapter, and bears date the 23rd March, 1838. It contains the following passage :—

It is evident from this letter that the Count di Litta did not consider that the S. Council, as then existing, could claim the rights of a legally-constituted Chapter ; how, then, could they demand that no step should be taken by any section of the Order without their consent, which, if Di Litta be right, and there is every reason to believe he was, would have been valueless when obtained ? Again, in 1841-4 attempts were made by the Anglican Knights to obtain a recognition to their position, but without avail, the Lieutenant-Master for the first time asserting that only Roman Catholics were admissible to the Order, a statement con- trary to fact, as the history of the Order shews, and as I have briefly pointed out already. In 1858 a more successful attempt was made, and it was arranged that, so soon as four Roman Catholic Commanderies were founded in England, the Anglican Knights should receive recognition, but that the dignity of Prior must always be held by a Roman Catholic professed Knight. These negotiations, so happy in their inception, were brought to an abrupt termination by the improper conduct of at least one of those engaged in the matter, and soon after the Roman Chapter published a declaration against the proceedings of their Anglican brethren. About a year ago a fresh correspondence was com- menced with the S. Council, and one of the Anglican Knights had an interview at Rome with the Vice-Chancellor of the Order, but found that the old plea of none but Roman Catholics being admissible was, after a lapse of twenty-five years, and having been abandoned in 1858, once more revived, and this, notwithstanding the existence of the Bailiwick of Brandenburg. Rebuffed, but not discouraged, the Anglican Chapter looks forward to the time when the isolated branches of this great Order will be once more united, nor are they without a precedent. At the beginning of the last century a serious breach occurred between the Bailiwick of Bran- denburg and the head of the Order, and intercourse ceased for more than 60 years. When, however, the Bailiff Prince Ferdinand was elected Herren-Meister, he sent in 1763 the Chevalier von

Miinchow to the Grand Prior of Bohemia, to request the confirma- tion of his election, which was granted, and the German Knights acknowledged to be true members of the Order. Why should not even-handed justice be meted out to the Anglican Knights, who are only acting now as their German confreres did, a hundred and seventy years ago, and for a similar reason?

Since the above was written, a second letter from "A Hospitaller " has appeared, and I regret to find that he has re-

sorted to personalities. As regards the Grand Prior of England sitting in Parliament, he did so in right of his temporal barony (not as G. P.), and when he was deprived of this he of course lost his seat too. "A Hospitaller" still persists in coupling the names of a duke of ancient lineage with that of the ex-store- keeper (he is not now employed by the National Society) : is this consistent with the courtesy we have a right to expect from one who claims to be a chevalier of the oldest knightly Order in Christendom? In conclusion, let me mention that the most recent and greatest work of the Anglican Knights of St. John was the

establishment in 1868 of a branch of the Societe Internationale de Secours aux Militaires =lades et blesses in this country. From the Committee then formed by the Knights has developed the society

that has done and is doing so much for the sick and wounded in this terrible war now raging.—I am, Sir, &c.,