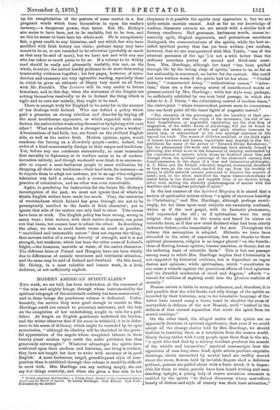 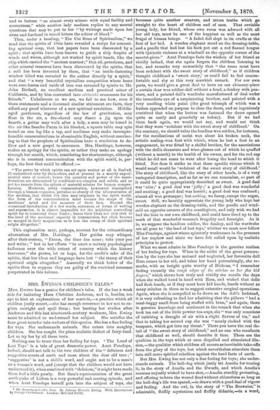 MODERN AMERICAN SPIRITUALISM.* Tins work, we are told, has been

undertaken at the command of "the wise and mighty beings through whose instrumentality the spiritual telegraph of the nineteenth century has been constructed," and to these beings the ponderous volume is dedicated. Unfor- tunately, the service they were good enough to render to Mrs. Hardinge could not extend to pecuniary assistance, and the lady on the completion of her undertaking, sought in vain for a pub- lisher. At length an English gentleman undertook the burden, and the writer observes that if his name is withheld, it is in defer- ence to his sense of delicacy, which might be wounded by its open enunciation, "although its identity will be cherished in the grate- ful appreciation of the angels whose completed labours in their twenty years' mission upon earth the noble publisher has thus generously outwrought." Whatever advantages the spirits have conferred upon their medium and historian, one thing is evident, they have not taught her how to write with accuracy or in good English'. A more barbarous, turgid, grandiloquent style of com- position than is exhibited through this volume it would be difficult to meet with. Mrs. Hardinge can say nothing simply, she can say few things correctly, and when she gives a free rein to her

* Modern American Spiritualism: a Twenty Tears' Record of the Communion betwem Barth and the World of Spirits. By Emma Plardinge. New Edition. New York : Published by the Author.

eloquence it is possible the spirits may appreciate it, but we are quite certain mortals cannot. And as far as our knowledge of medium literature extends we are struck with a similar lack of literary excellence. Bad grammar, barbarous words, names in- correctly spelt, illogical arguments, and pretentious assertions distinguish the communications of the spirits, while the best so- called spiritual poetry that has yet been written (we confess, hotvever, that we are unacquainted with Mrs. Tuttle, "one of the sweetest poetesses of the age ") is not a whit better than the ordinary mundane poetry of second and third-rate versi- fiers. Mrs.. Hardinge, although her hand "has been guided through life by the loving clasp of spirits," seems t.0 us, so far as her authorship is concerned, no better for the contact. She could not have written worse if the spirits had let her alone. "' Credal faiths," " ressurrected being," " authoritarian names," "scien- tists," these are a few among scores of unauthorized words or phrases coined by Mrs. Hardinge ; while her style may, perhaps, be sufficiently exhibited by one very brief passage, in which she refers to A. J. Davis, " the culminating marvel of modern times," the clairvoyant "whose transcendent powers seem to concentrate into one focal point all the lesser lights of magnetic marvel."

"The obscurity of the personages, and the humility of their pre- tensions may throw over the origin of the movement, the veil of un- kind forgetfulness, or ungrateful repudiation, yet the vital fires of magnetism, of the subtle forces of psychology, will yet be found to underlie the whole science of life and mind, whether incarnate in mortal clay, or enfranchised in the free spiritual existence in life beyond the tomb. The waters of Oblivion muddied, or the thick night of human ignorance and human ingratitude may engulph in dim for- getfulness tho name of the author of Nature's Divine Revelations ; but his phenomenal life-work and teachings have already formed a glittering star which is set in the firmament of eternity, surrounded by the constellation of unworn minds whom he focalized about him, and through whom the spiritual yearnings of the nineteenth century first found expression in the shape of a true and harmonious philosophy. A. J. Davis and his friends, ridiculed, despised, contemned, slandered as they were,on the one band, startled the age from the worship of atoms, in which material science pretended to discover the sources of mind ; and, on the other, embodied the vague transcendentalism, of credal faiths in the distinct and tangible form of an electric, living, silver cord, uniting the shadowy phantasmagoria of matter with the deathless and changeless principle of spirit."

In the last number of the Spiritual Magazine it is stated that & section of spiritualist writers evince "a spirit of ravenous hostility to Christianity," and Mrs. Hardinge, although perhaps unwit-

tingly, for her ideas upon most subjects are eminently confused, writes as if the new gospel, with its fantastic phenomena, had superseded the old ; as if spiritualism were the only religion that appealed to the reason and based its claims on scientific facts, as if this new creed declared what had been utterly

unknown before,—the immortality of the soul. Throughout the volume this assumption is adopted. Hitherto we have been shrouded in the mists of superstition, but now, thanks to these spiritual phenomena, religion is no longer placed "on the founda- tions of fleeting human opinion, human assertion, or theory, but on the enduring basis of scientific facts." This is but one passage among many in which Mrs. Hardinge implies that Christianity is. not supported by historical evidence, but is dependent on vague

desires and opinions ; while spiritualism, which "constitutes is one sense a crusade against the pernicious effects of fixed opinions and the dwarfish tendencies of creed and dogmas," affords "a

transit for millions of aspiring souls into the glorious realities of eternity."

Human nature is liable to strange influences, and, therefore, it is just possible that the wild freaks and silly doings of the spirits as recorded by their historian, may in the inimitable language of the

writer have caused many a brave heart to shoulder the cross of martyrdom in defence of the new Messiah, until "hushed in the stillness of that eternal separation that sends the spirit from its.

On the other hand, the alleged antics of the spirits are se apparently destitute of spiritual significance, that even if we could accept all the strange stories told by Mrs. Hardinge, we should hesitate in receiving them as a revelation from the unseen world.

Heavy dining-tables with heavy people upon them float in the air, "a spirit who had died by a railway accident produces the sounds of the whistle and locomotive," mystical manuscripts bear the signatures of men long since dead, spirit artists produce exquisite drawings, •chairs untouched by mortal hand are swiftly moved.

about the room, flowers held by invisible fingers shed a delicious perfume, persons are pulled about with a force which it is impos-

sible for them to resist, pencils have been heard writing and seen standing upright, a young lady of scarce seventeen summers is

enabled by the spirits "to deliver discourses whose marvellous beauty of diction and style of oratory was their least attraction,'

and to lecture "on almost every science with equal facility and correctness," while another lady medium replies to any mental questions that may be put to her "by writings made upon her arms and forehead in raised letters the colour of blood."

Then, under a heading, "The Cui Bono of Spiritualism," we read that the spirits of Ohio have revealed a recipe for concoct- ing spiritual soap, that lost papers have been discovered by a

spirit ; that spirits have been known to guide a ship despite of winds and waves, although not worked by spirit hands, like the ship which carried the "ancient mariner;" that oil, petroleum, and -other mineral treasures have been discovered by the spirits, that a mill has been invented by them, that "an inside-fastening window blind was revealed to the author directly by a spirit,"

and that "a very beautiful crystalline composition whose bases were rose-leaves and oxide of iron was revealed by spirits to Mr. -John Birdsall, an excellent medium and practical miner of

California, and by him converted into recherche ornaments for his friends." Unbelievers as we are, we fail to see how, even if these statements and a thousand similar statement are facts, they afford any proof whatever of a new spiritual revelation. Middle- aged gentlemen, regardless of the law of gravitation, may

float in the air, a fire-shovel may dance a jig upon the hearth, a guitar may walk after a lady, a man may be tossed in the air like Sancho Panza in his blanket, a square table may spin round on one leg like a top, and mediums may make incompre- hensible communications in abominable English, without convinc- ing us that the prophets of Spiritualism have a revelation to de- liver and a new gospel to announce. Mrs. Hardinge, however, makes an apology for the spirits, or rather they make an apology through her mouth, which, considering her shortcomings, although she is in constant communication with the spirit world, is, per- haps, the best that could be offered :—

" The power by which spirits can act upon matter at all is limited, ill-understood even by themselves, and at present in a merely experi- mental state of control; hence the quantity and power of the mani- festations are determined by conditions too complex and subtle, and as arct too remote from the sphere of material science for human compre- hension. Moreover, every communication, howsoever transmitted through a human organism, partakes so closely of the idiosyncrasies of the medium, that whilst the idea may originate in the spirit world, the form of the communication must assume the shape of the mediums' mind and the measure of their face. Beyond the occasional introduction of a few words, sentences, or forms of writing and expression, it is almost impossible for the mightiest controlling spirit far to transcend these limits ; hence their ideas not only sink to the level of the mediums' capacity in transmission, but often become so merged in their magnetism as to lose the stamp of their spiritual origin altogether."

This explanation may, perhaps, account for the extraordinary aberrations of Mrs. Hardinge. Her guides may whisper, after their custom, "Emma, the time has come ; take your pen and write ; " but in her efforts "to exert a unitary psychological influence over the wide extent of country which the history traverses," she proves, let us hope, for the credit's sake of the spirits, that her ideas and language have lost 'the stamp of their spiritual origin altogether." Assuredly we think better of the spirits than to suppose they are guilty of the wretched nonsense perpetrated in this volume.