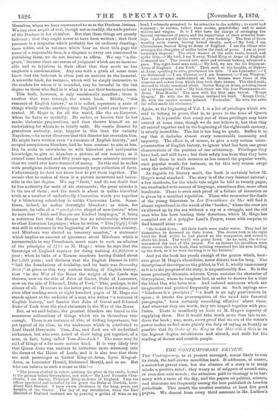 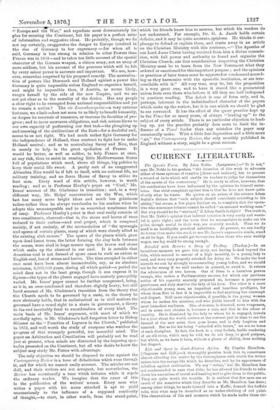 THE Contemporary, as at present managed, seems likely to run its rivals, the half-crown monthlies hard. It addresses, of course, a somewhat graver class, but the absence of a story is to many minds, a positive relief ; they weary so of snippets of second-rate, or even first-rate novels ; the attention paid to theology is in har- mony with a taste of the day, and the papers on politics, science, and literature are frequently among the best published in London periodicals. This month the number contains at least five good papers. We dissent from every third sentence in Mr. Ludlow's "Europe and the War," and repudiate most determinately his plan for securing the Continent, but his paper is a perfect mine of information and suggestive ideas. He probably, though we do not say certainly, exaggerates the danger to Europe involved in the rise of Germany to her supremacy — for when all is said, Germany is leas strong in relation to other Powers than France was in 1808—and he takes too little account of the special character of the German weapon, a citizen army, not an army of mere soldiers, but his account of the pressure which will be felt by every minor power is accurate and important. We are, how- ever, somewhat surprised by his proposed remedy. The neutraliza- tion of powers like Denmark and Holland against a power like Germany is quite impossible unless England re-organizes herself, and might be impossible then, if Austria, as seems likely, ranges herself by the side of the new Empire, and we are not yet clear as to the morality of the device. Has any people -a clear right to be exempted from national responsibilities and yet to remain a nation ? The vie Luxenzbourgeoise—a very extreme instance, we admit—does not seem to us likely to benefit humanity, or deepen its reservoir of resources, or increase its faculties of pro- gress; and to incur enormous obligations, and risk serious blows to our own capacity of performing our first task—the ploughing up and resowing of the civilizations of the East—for a doubtful end, seems to us not right. We had much rather fight Germany for the independence of Holland, than contract to fight her to make Holland neutral ; and as to neutralizing Savoy and Nice, that is merely to help in the great spoliation of France. It would be better, as well as nobler, to help France at once, at any risk, than to assist in creating little Mediterranean States full of populations which need, above all things, big politics to keep their social life sweet. A pretty sort of an exaggerated Alhambra Nice would be if left to itself, with no national life, no military training, and no fierce House of Savoy to utilize its best men. Every word of this article, however, is worth reading ; and so is Professor Huxley's paper on "Coal," Mr. Lines' account of Mr. Gladstone in transition ; and, in a very -different way, Mr. Helps' conversation on the War, which last has many more bright ideas and much less gelatinous talkee-talkee than he always vouchsafes to his readers when he adopts this unmanageable and to us some1vhat wearisome form of essay. Professor Huxley's point is that coal really consists of two constituents, charcoal—that is, the stems and leaves of trees reduced to their carbon—and coal proper, which is composed mainly, if not entirely, of the accumulation of "the sporangia and spores of certain plants, many of which were closely allied to the existing club mosses." The spores of the plants which grew upon dead forest trees, the latter forming the clay beds between the seams, were shed in huge masses upon the leaves and stems which make up the charcoal in our coal. It is notable that American coal is not formed of spore cases to such an extent as English coal, but of stems and leaves. The time occupied in either ease must have been almost inconceivable, say, as an absolute minimum, 6,000,000 years, during all which period—a period the mind does not in the least grasp, though it can express it in 6gures—the types of the plants engaged have scarcely perceptibly 'varied. Mr. lanes' paper cannot be farther compressed, being, as it is, an over-condensed and therefore slightly heavy, but still lucid account of Mr. Gladstone's transition from the theory that the Church needs to be governed by a caste, to the theory he now obviously holds, that in ecclesiastical as in civil matters the governed have a moral right to a share in government, a theory in the end inevitably fatal to sscerdotalism of every kind. The main basis of Mr. Innes' argument, with most of which we cordially agree, is Mr. Gladetone's half-forgotten letter to Bishop Skinner on the "Function of Laymen in the Church," published in 1852, and well worth the study of everyone who watches the progress of that strangely powerful, but unrestful mind. The paper on Arbitration and Conciliation will probably not be read just at present, when minds are distracted by the imposing spec- tacles presented on the Continent, but all who desire to know the subject may study Mr. Potter with advantage.

The only objection we should be disposed to raise against the Contemporary Review is a tone of didacticism which runs through it, and for which we cannot easily account. The articles are not dull, and their writers are not arrogant, but nevertheless, the Review has occasionally a tone which irritates while it repels the ordinary reader. We imagine that the cause of this is the publication of the writers' names. Every man who writes a paper with his name attached is apt to yield unconsciously to the influence of a supposed continuity of thought,—to start, in other words, from the stand-point, which his friends know him to assume, but which his readers do not understand. For example, Dr. G. A. Jacob holds certain definite, and it may be quite accurate, opinions. He thinks it sur- plusage to defend or explain them, and starts away in an article on the Christian Ministry with this sentence,—" The Apostles of our Lord Jesus Christ having received from him a divine commis- sion, with full power and authority to found and organize the Christian Church, our first consideration respecting the Christian Ministry must be to learn from the New Testament what they ordered or sanctioned for this important purpose ; and the opinions or practices of later times must be approved or condemned accord- ing as they harmonize with the apostolic institution, or are irre- concilable with it." All very true, may be, but the proposition is a very great one, and to have it stated like a geometrical axiom frets even those who believe it till they are half indisposed to continue reading. The defect is one of form only, and is, perhaps, iuherent in the individualized character of the papers which make up the review, but it is one which we should be glad to see corrected. It has the effect of the queer practice kept up in the Times for so many years, of always "leading up" to the subject of every article. There is no particular objection to lead- ing up, yet the practice probably does more to limit the in- fluence of a Times' leader than any mistakes the paper may occasionally make. With a little less dogmatism and a little more "go," the Contemporary Review, the only monthly published in England without a story, might be a great success.