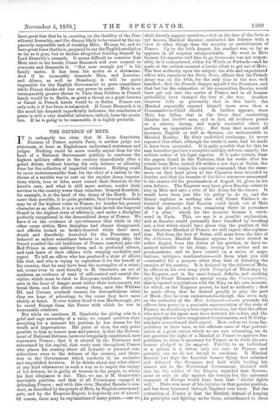 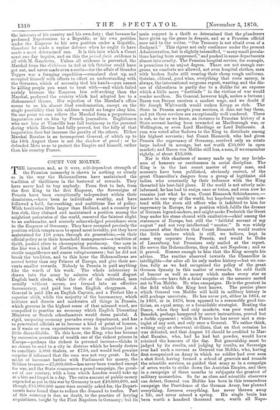 THE DEFENCE OF METZ.

IT is unhappily too clear that M. Leon Gambetta, Dictator of France outside Paris, is neither judge nor statesman, at least as Englishmen understand statesmen and judges. Nothing could be more cruelly unjust than for the head of a National Government publicly to condemn the highest military officer in the country immediately after a grand defeat, without hearing his own defence or allowing time for the collection of impartial evidence. Nothing could be more unstatesmanlike than for the chief of a nation in the throes of a terrible war to cast on the regular Army imputa- tions which, true or false, must wound their Generals to the hearts core, and what is still more serious, render their services to the country worse than valueless. General Bourbaki, for example, is at the head of the Army of the North. It is more than possible, it is quite probable, that General Bourbaki may be of the highest value to France, for besides his general character as an officer, it is a certainty that he left the Imperial Guard in the highest state of efficiency, and under a discipline perfectly exceptional in the demoralized Army of France. We have it on the evidence of eye-witnesses that while in the other corps within Metz discipline had almost disappeared, and officers looked on broken-hearted while their men, drunk and disorderly, hurrahed for the Prussians, and behaved as sailors sometimes behave in a sinking ship, the Guard recalled the old traditions of France, marched past the Red Prince in stern military form and in profound silence, and took leave of their officers with weeping cordiality and regret. To tell an officer who has produced a state of affairs like that, and who is trying to reproduce it for the benefit of his country, that he may have been the accomplice of a crimi- nal, seems even to men friendly to M. Gambetta an act of madness, an evidence of want of self-control and mental dis- cipline which must be fatal to European confidence. States- men in the hour of danger must utilize their instruments, not break them, and the ablest among them, men like William III. and Cavour, overlook reasons for distrustfulness when they see hope of advantage to the cause they have most closely at heart. If ever traitor lived it was Marlborough, yet he saved Europe from the Power with which he was in treasonable relations.

But while we condemn M. Gambetta for giving rein to a grief and rage unworthy of a ruler, we cannot question that, accepting for a moment his position, he has reason for his wrath and imprecations. His point of view, the only point possible to him as honest man and patriot, is that the Govern- ment of National Defence, however irregularly constituted, now represents France ; that it is obeyed by the Provinces and reverenced by the capital, that every man throughout France who places his country above all dynastic or personal con- siderations owes to the defence of the country, and there- fore to the Government which conducts it, an exclusive and unqualified devotion. If he thinks about any other object of any kind whatsoever in such a way as to impair the energy of his defence, he is guilty of treason to the people, to whom his first allegiance is due. This, we say, is M. Gambetta's inevitable position, and that of all Frenchmen engaged in defending France ; and with this view, Marshal Bazaine's con- duct, as described by the people of Metz, by English correspond- pnts, and by the Empress-Regent, is hopelessly out of accord. Of course, there may be explanations of many points,—one we shall directly suggest ourselves,—but on the face of the facts as yet known, Marshal Bazaine conducted his defence with a view to other things than the security or revindication of France. Up to the 18th August, his conduct was, so far as appears, in all respects unimpeachable. He went to Metz because his superior told him to go there—he was not respon- sible, be it remembered, either for Worth or Forbach—and he made at the earliest moment a heroic effort to get out of Metz. The best authority upon the subject, the able and experienced officer who reports to the Daily News, affirms that the French Army was on the 16th, for the only time in the war, well handled ; that the French charges appalled the Prussians, and that but for the exhaustion of his ammunition Bazaine would have got out into the centre of France, and in all human probability have changed the fate of the war. Another observer tells us personally that in this battle the Marshal repeatedly exposed himself more even than a

Commander-in-Chief should. It further appears, since Metz has fallen, that in the three days' combatting Bazaine lost 50,000 men, and in fact, all evidence points to a sincere, daring, and nearly successful effort to perform an imperative duty. But from that moment all accounts, English as well as German, are unfavourable to Marshal Bazaine. By their undivided testimony, he never repeated this effort, although for weeks it must, had he made it, have been successful. It is quite possible that for this he may hereafter produce a complete military defence, namely, the written orders of his legal superior. It is quite certain, from the papers found in the Tuileries, that for weeks after his retreat from Metz, indeed till within a few days of Sedan, the Emperor did not resign his supreme command, that the assur- ances on that head given to the Chamber were intended to deceive, and that his transfer of the bdtan was never announced to his armies till his proclamation of August 31, given in his own defence. The Emperor may have given Bazaine orders to stay in Metz and save a relic of his Army for the future. It would have been just like his policy to do so, and the theory explains as nothing else will Count Palikao's re- iterated statements that Bazaine could break out of Metz when he pleased, and was remaining there in pursuance of "a plan," which for the moment became a catch- word in Paris. This, we say, is a possible explanation, and as Bazaine would personally have benefited by breaking out, a feat which would have given him the position of the one victorious Marshal of France, we still expect this explana- tion. But from the date of Sedan, still more from the date of the de'cheance, Marshal Bazaine appears to have retired in sullen disgust from the duties of his position, to have re- mained invisible to his Army, issuing few orders and no proclamations, and to have carried on a series of nego- tiations, intrigues, machinations—call them what you will —intended for a purpose other than that of defeating the enemies of his country. It is declared by the citizens of Metz, by officers in his own army (vide Telegraph of Thursday), by the Empress, and in the most formal, definite, and exulting style by Count Bismarck's special organ, the Correspondenz, that he opened negotiations with the King on his own account, for which, as the Empress proves, he had no authority ; that he made offers, that he desired greatly to play the part of Monk, that he even endeavoured—though this rests only on the authority of the Nets Independence—to persuade his officers into peace by a pessimist representation of the state of France; we should say a false representation, but that the officer who acted as his agent may have bettered his orders, and the reporting officers have exaggerated hisstatements, and M. Collig- non have overcoloured their report. Now, evil as we deem Im- perialism to have been, as the efficient cause of that pulveri- zation of a great nation which we are now witnessing, we do not question the right of a Marshal of France to approve Im- perialism, to deem it necessary for France, or to deem his own honour pledged to its support. Fidelity to an individual or a system is a virtue only too rare in France, and certainly one we do not intend to condemn. If Marshal Bazaine had kept the Imperial banner flying, had attacked and defeated the Germans, and had, while lending his utmost aid to the Provisional Government, declared still that he, the soldier of the Empire, regarded that Govern- ment as only an ally against the foreign foe, the universal comment of Europe would have been that " Abdiel fights well." Blake won most of his victories in that precise position, and has been honoured through England ever since. But the contention of France is that the Marshal, instead of keeping his principles and fighting under them, subordinated to them the interests of his country and his own duty ; that because he preferred Napoleonism to a Republic, or his own position under the Emperor to his own position under a Republic, therefore he made a supine defence when he ought to have made a most determined one. It is this into which a Court must one day inquire, and on this the prima jhcie evidence is all with M. Gambetta. Unless all evidence is perverted, the Marshal from the cle'elleance to 3rd or 4th October could have got out, and never made even a sortie—for the affair of Grandes Tappes was a foraging expedition—remained shut up, and occupied himself with efforts to effect an understanding with the Germans, which of necessity tied his hands—you cannot be 4illing people you want to treat with—and which failed mainly because the Empress, less self-seeking than the Marshal, preferred the country which had adopted her to a dishonoured throne. Her rejection of the Marshal's offers seems to us his almost final condemnation, except on the single possibility that his soldiers would no longer obey him. On one point we can relieve the Marshal from a preposterous imputation cast on him by French journalists. Englishmen who saw him at Vionville bear full testimony to the personal daring which Mexico had fully proved, but the folly of that imputation does but increase the gravity of the others. Either Marshal Bazaine is an incompetent General, of which up to the 18th August there is not the shadow of proof ; or he defended Metz so as to protect the Empire and himself, rather than his country France.