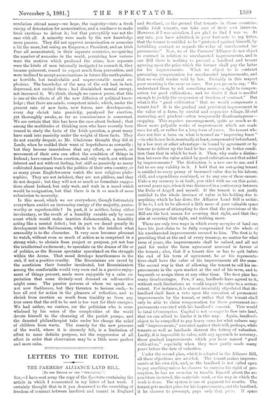 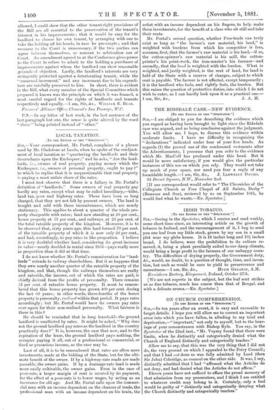 THE FARMERS' ALLIANCE LAND BILL. [To THE EDITOR. OF THE " SPECTATOR."1 SIR,—I have sent away the copy of the S pectata; containing the article in which I commented in my letter of last week. I certainly thought that in it you demurred to the overriding of freedom of contract between landlord and tenant in England

and Scotland, on the ground that tenants in those countries, unlike Irish tenants, can take care of their own interests. However, if I was mistaken, I am glad to find I was so. At any rate, you have admitted, in your foot-note to my letter, that the tenant is entitled to be "protected against himself, by forbidding contract as regards the value of unexhausted im- provements." Now, we of the Farmers' Alliance do not object to contract in relation to unexbausted improvements, and in our Bill there is nothing to prevent a landlord and tenant agreeing upon the price which the former shall pay the latter for his improvements. What we object to is contract preventing compensation for unexhausted improvements, and that we would render void by la.W. Probably in this respect your meaning is the same as ours. But you go on to say, "We understand them to ask something more,—a right to compen- sation for good cultivation ; and we doubt if that is needful enough to justify the suspeusion of freedom of contract." But what is the "good cultivation that we would compensate a tenant for ? It is the gradual and persistent improvement in the value of a farm, by careful and expensive tillage, liberal manuring, and prudent—often temporarily disadvantageous— cropping. This requires encouragement, quite as much as do those more palpable works of improvement which are made once for all, or rather for a long term of years. No tenant who does not hire a farm on what is termed an "improving lease" —in which case he is, nominally at least, compensated beforehand, by a low rent or other advantage—is bound by agreement or by honour to deliver up the land he has occupied in better condi- tion than that in which he took it. Then, why make a distinc- tion between the value added by good cultivation and that added by improvements ? The distinction is a new one to me, and I fail to see any validity in it. I hold that an out-going tenant is entitled to every penny of increased value due to his labour, skill, and expenditure combined, or to any one of these causes. Unless my memory is at fault, you sided with me on this point, several years ago, when it was discussed in a controversy between the Duke of Argyll and myself. If the tenant is not justly entitled to the whole increase of value in his holding due to anything which he has done, the Alliance Land Bill is unfair. If he is, I ask to be allowed a little more of your valuable space for the pupose of attempting to show that the provisions of the Bill are the best means for securing that right, and that they aim at securing that right, and nothing more.

There are only two ways in which every occupier of land can have his just claim to be fully compensated for the whole of his unexhausted improvements secured to him. The first is by providing that at the end of every tenancy, no matter for what term of years, the improvements shall be valued, and all not paid for under the farm agreement assessed in favour of the tenant ; also, that if a tenant dies or has to quit before the end of his term of agreement, he or his representa- tives shall have the value of his improvements all the same. The second way is that of allowing the tenant to sell his im- provements in the open market at the end of his term, and to bequeath or assign them at any other time. The first plan has many disadvantages. Pew, if any, landlords have agreed to it, without such limitations as would impair its value to a serious extent. For instance, it is almost invariably stipulated that the landlord shall have a veto upon the execution of permanent improvements by the tenant, or rather that the tenant shall only be able to claim compensation for those permanent im- provements executed with his landlord's consent. This would be fatal teenterprise. Capital is not so eager to flow into land, that we can afford to hinder it in this way. Again, landlords object to be compelled to pay heavy sums for what valuers may call "improvements," executed against their will, perhaps, while tenants as well as landlords distrust the lottery of valuation. Lastly, it is impossible to value, with any approach to accuracy, those gradual improvements which you have named "good cultivation," especially when they were partly made many years before the date of valuation.

Under the second plan, which is adopted in the Alliance Bill, all these objections are avoided. The tenant makes improve- ments at his own risk, and, as the landlord is not called upon to pay anything unless ho chooses to exercise his right of pre- emption, he has no occasion to trouble himself about the ex- penditure incurred, the materials used, or the way in which the work is done. The system is one of payment for results. The tenant gets market price for his improvements, and the landlord, if he chooses to pre-empt, pays only that price. If space allowed, I could show that the other tenant-right provisions of the Bill are all essential to the preservation of the tenant's interest in his improvements ; that it would be easy for the landlord to choose his own tenant, by arranging with one to take the holding off his hands, in case he pre-empts ; and that recourse to the Court is unnecessary, if the two parties can agree between themselves, or consent to arbitration out of Court. An amendment agreed to at the Conference gives power to the Court to refuse to admit to the holding a purchaser of improvements against whom the landlord can show reasonable grounds of objection. Lastly, the landlord's interests are very stringently protected against a deteriorating tenant, while the "unearned increment," and any increment due to his expendi- ture are carefully preserved to him. In short, there is evident in the Bill, what every member of the Special Committee which prepared it knows was the principle on which it was framed, a most careful regard for the rights of landlords and tenants respectively and equally.—I am, Sir, &c., WILLIAM E. BEAR.

P.S.—In my letter of last week, in the last sentence of the last paragraph but one, the sense is quite altered by the word " these "being printed instead of " other."