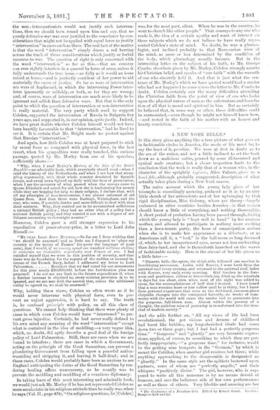 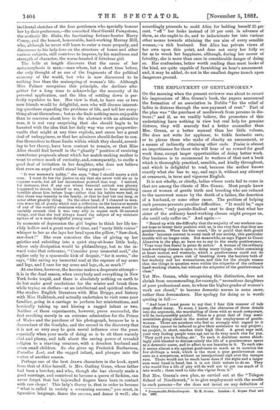 A NEW YORK BELLE.* Is this story gives anything like

a true picture of what goes on in fashionable circles in America, the mode of life must be, to say the least of it, peculiar. We were at first in doubt as to the sex of the writer, and not a little inclined to set the book down as a malicious satire, penned by some ill-favoured and cynical male creature ; but a closer inspection leads to the conclusion that the work is really that of a woman who, in the

character of the sprightly ingame, Alice Palmer, gives us a bona fide, although probably exaggerated, description of what actually takes place during a New York season.

The naïve account which the young lady gives of her triumphs is exceedingly amusing, prefaced as it is by an airy little sketch of her antecedents and of her upbringing by that rigid disciplinarian, Miss Gobang, whose pet theory—largely embraced in other countries besides America—is that women should know a little of everything, and nothing thoroughly.

A short period of probation having been passed through, daring which the young lady is "kept well in hand" by her anxious mother, and allowed to participate in nothing more exciting than a lawn-tennis party, the hour of emancipation arrives

when she is to make her appearance as a dArttante, or as Americans call it, a "bud," in the ball.room so long dreamed of, which, to her inexperienced eyes, seems not less enchanting than fairy-land, and she is thenceforth launched on the waves of fashionable society. Here is the te8I6Mg of her life given us a little later :— " Dinners, balls, the opera, the sleigh-ride, followed one another in bewildering succession. Laden with flowers, I went forth from the paternal roof every evening, and returned to the paternal roof, laden with flowers, very early every morning. Girl lunches in the fore- noon and gentlemen callers at five-o'clock-tea, filled up the intervals in days far too short, even when most of the night was added to them, for the accomplishment of half that I desired. I have heard that a man remains more or less callow until he is thirty, but I know from personal experience that even as the dull-hued, common-place chrysalis changes into the variegated butterfly, six weeks of com- merce with the world will cause the tender bud to germinate into the gorgeous, full-blown rose. Almost within the passing of a thought, the guileless miss of yesterday is transformed into the iron- clad of modern society."

And she adds further on, "All my views of life had been revolutionised, the pet visions and dreams of childhood had burst like bubbles, my long-cherished ideals had come down two or three pegs ; but I had had a perfectly gorgeous time." "Gorgeous" and "ghastly" are very favourite expres- sions, applied, of course, to something to which they are per- featly inappropriate,—" a gorgeous time," for instance, would be the getting nine bouquets in the "German," by which is meant the Cotillon, when another girl receives but three; while anything approaching to the disagreeable is designated us "ghastly." In the same style are the epithets bestowed upon partners, some of whom are "perfectly angelic," and their whispers "positively divine." The girl, however, who is sup- posed to write all this nonsense is by no means devoid of humour, and sees the ludicrous side of her own performance as well as those of others. Very life-like and amusing are her

• The Confessions of a Frivolous Girl. Edited by Robert Grant. London: Sampson Low and Co.

incidental sketches of the four gentlemen who specially honour her by their preference,—the conceited blasé Gerald Pumystone, the msthetic Mr. Blake, the fascinating fortune-hunter Harry Coney, and the honest, honourable, hard-working Murray Hill, who, although he never will learn to enter a room properly, and discourses to his lady-love on the structure of bones and other curious subjects, still contrives to impress, by his manliness and strength of character, the warm-hearted if frivolous girl.

The belle at length discovers that the cause of her metamorphosis is man,—man whom, but a short time before, she only thought of as one of the fragments of the political economy of the world, but who is now discovered to be nothing less than the mainspring of woman's life. Although Miss Palmer recognises this principle, she declines alto- gether for a long time to acknowledge the necessity of its personal application, and the idea of settling down is per- fectly repulsive to her. Her view is that, to have one or two men friends would be delightful, men who will discuss interest- ing questions regarding the problems of life, and tell her every- thing about themselves ; but as she finds nothing more enjoyable than to converse about love in the abstract with an attractive man, it is not very surprising that she should begin to be haunted with the idea that her daily way was over gunpowder- vaults that might at any time explode, and cause her a great deal of unhappiness, or that her admirers should decline to con- fine themselves to those limits within which they should, accord- ing to her theory, have been content to remain, or that Miss Alice should find herself in the " ghastly " position of receiving unwelcome proposals about which her match-making mother is -wont to evince much of curiosity, and, consequently, to excite a good deal of irritation in her daughter, who does not believe that even an angel would stand being pumped :—

"it was mamma's hobby," she says, "that I should marry a rich man. I mast do her the justice to say that she never told me so in express words, but all her innuendoes pointed that way. I noticed, for instance, that if any one whose financial outlook was gloomy happened to devote himself to me, I was sure to hear something horrible about him before long—either that his habits were bad, or that there was insanity in the family, or that he had but one lung, or some other ghastly thing. On the other band, if I chanced to men- tion some bit of gossip which cast a reflection on the brains or morals of any of the wealthy creatures who admired me, mamma would in- variably remark that it was very silly to repeat such ill-natured things, and that she had always heard the subject of my stricture spoken of as a most delightful young man."

In moments of depression the girl begins to think her life ter- ribly hollow and a great waste of time, and "nasty little voices" whisper to her as she lays her head upon the pillow, "Saw-dust, saw-dust !" She even conceives the idea of giving up her gaieties and subsiding into a quiet stay-at-home little body, whose only dissipation would be philanthropy, but to the in- ward voice that reiterates, "Consider your immortal soul," she replies only by a spasmodic kick of despair, "for it seems," she says, "like saving my immortal soul at the expense of my arms and legs, and I care for my arms and legs, oh, so much !"

At one time, however, the heroine makes a desperate attempt— it is in the dead season, when everybody and everything in New York looks torpid, and there is absolutely nothing on earth to do but make good resolutions for the winter and break them while trying on clothes—at an intellectual and spiritual reform. She studies English literature with Miss Driggs, and history with Miss Halkbush, and actually undertakes to visit some poor families, going in a carriage to perform her ministrations, and heroically taking up and kissing a ragged infant or two.

Neither of these experiments, however, prove successful, the first resulting merely in an extreme admiration for the Prince of Wales and the purchase of his photograph, because he is a descendant of the Guelphs, and the second in the discovery that it is not so very easy to gain moral influence over the poor, especially when your mode of doing so is to sit there warmly clad and plump, and talk about the saving power of revealed religion to a starving creature, with a drunken husband and seven small children. So she gives up Frederick Barbarossa, Paradise Lost, and the ragged infant, and plunges into the vortex of another season.

Perhaps one of the best drawn characters in the book, apart from that of Alice herself, is Mrs. Gatling Gunn, whose father had been a butcher, and who, though she has cleverly made a

good marriage, and contrived to become a queen of fashion, can never forget that her bejewelled fingers have been in contact with raw chops ! This lady's theory is, that in order to become "what is called in society a screaming success," you must, in figurative language, dance the cawarn, and dance it well; she

accordingly proceeds to scold Alice for holding herself 25 per cent. " off " her looks instead of 50 per cent, in advance of them, as she ought to do, and to indoctrinate her into various other means towards attaining the one aim of every sensible woman,—a rich husband. But Alice has private views of her own upon this point, and does not carry her folly so- far as to wreck her happiness, although, during her career of frivolity, she is more than once in considerable danger of doing so. Her confessions, better worth reading than most books of the kind, are quite capable of furnishing an hour's amusement and, it may be added, do not in the smallest degree trench upon dangerous ground.