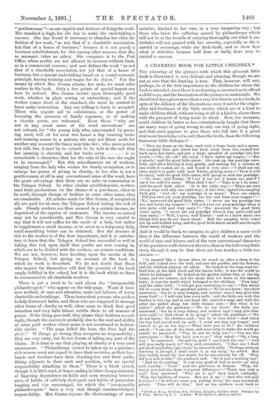 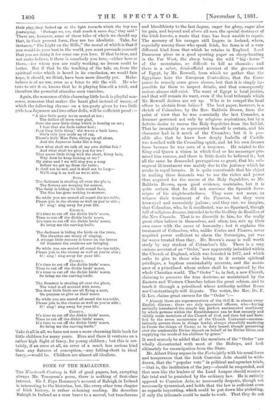 A CHARMING BOOK FOR LITTLE CHILDREN. * THE colouring of the

pictures with which this pleasant little book is illustrated is very delicate and pleasing, though we are not so sure that the drawing is true. That, however, will not, perhaps, be of the first importance to the children for whom the book is intended, since there is no drawing so incorrect as to offend a child's eye, and the fascination of the pictures is undeniable. We should not have given more than a very few lines to such a book, in. spite of the delicacy of the illustrations, were it not for the origin- ality and freshness of the little stories, which are of a kind to make children think, without being at all of a kind to alarm them with the prospect of being made to think. How, for instance, could children be better or less ostentatiously taught that there are many ways of going wrong to only one way of going right, and that error appears to give those who fall into it a great deal more knowledge (of a sort) than the truth, than the following humorous little dialogue P- " They sat down on the floor, each with a large basin and a spoon. The naughty little girl threw her book away from her, turned her back upon her sister, and put a large spoonful of porridge into her mouth.—' Oh—oh—oh she cried, I have burnt my tongue.'—' Eat it slowly,' said the good little sister. She took up her porridge care- fully, and after blowing it very gently, and waiting for a minute or two while it cooled, ate it, and found it very nice.—' I shall not eat. mine until it is quite cold,' said Totsey, getting cross.—' Then it wilk be nasty,' said the good little sister, still going on with her porridge. —‘ Oh, dear,' said Totsey, 'if I eat it too hot it burns me, and if I eat it too cold it's nasty. What shall I do ?'—' Take it as I do mine,' said the good little sister. It is the right way.'—' There are two wrong ways and only one right way ; it isn't fair, sighed the naughty little girl. 'And, oh ! my porridge is BO nasty.' Then she asked, Did you ever eat your porridge too hot and burn your tongue F'— 'No,' answered the good little sister, I never ate my porridge too hot and burnt my tongue.'—' Did you ever eat your porridge when it was quite cold and very nasty ?'—' No,' answered the good little sister again, I never ate my porridge when it was quite cold and very nasty.'—' Well, I have,' said Totsey ; 'and 80 I know about two things that you do not know about.' And the naughty little sister got up and walked away, and the good little sister sat still and thought about many things."

And it would be hard, we imagine, to give children a more vivid. idea of the difference between the world of workers and the world of ease and leisure, and of the very conventional character of the partition-walls between the two, than in the following little. story, though it may be that there are here touches a little too obscure :—

" It seemed like a dream when he stood up after a sleep in the field, and looked over the wall, and saw the garden, and the flowers,. and the children playing all about. He looked at the long road be- hind him, at the dark wood and the barren hills ; it was the world to which he belonged. He looked at the garden before him, at the big house, and the terrace, and the steps that led down to the smooth, lawn ; it was the world which belonged to the children. 'Poor boy,' said the elder child ; I will get you something to eat.'—' But where did be come from ?' the gardener asked.—' We do not know,' the child answered ; but he is very hungry, and mother says I may give him some food.'—' I will take him some milk,' said the little one with the feather in her cap, and in one hand she carried a mug, and with the other she pulled along her little broken cart.—' But what is be called ?' asked the gardener.—' We do not know,' the little one answered ; but he is very thirsty, and mother says I may give him some milk.'—' And where is he going ?' asked the gardener.—' We do not know,' the children said ; 'but he is very tired:—And when the boy had rested well, he said, I must not stay any longer,' and turned to go on his way.—' What have you to do ?' the children asked.—' I am one of the crew, and must help to make the world ge round,' he answered.—' Why do not we help, too ?'—' You are the passengers.'—' How far have you to go ?' they asked.—' Oh, a long way !' he answered. 'On and on, until I can touch the sun.'—' And will you really touch it ?' they said, awestruck. I dare say I shall' get tired long before I get there,' he answerrd, sadly. 'Perhaps, without knowing it, though, I shall touch it in my sleep,' he added. But. they hardly heard the last words, for he was already far off. Why did you talk to him ?' the gardener said. 'Ho is just a working boy.' And we do nothing ! It was very good of him to notice us,' they said, humbly.—' Good!' said the gardener, in despair. Why, be- tween you and him there is a great difference.'—' There WWI only a wall,' they answered. Who set it up ?' they asked, curiously. Why, the builders, of course. Men set it up.'—' And who will pull it down F'—' It will not want any pulling down,' the man answered,. grimly. Time will do that.' And as the children went back to • Children Busy, Children Sad, Children Naughty, Children GM. Pictures by/ T. Pym. Stories by L. C. London : Wells Gardner, Dorton, and Co.

their play, they looked up at the light towards which the boy was journeying. Perhaps we, too, shall reach it some day,' they said."

There are, however, some of these tales (4 which we should say that, in their present form, they are too idealistic. Take, for instance," The Light on the Hills," the moral of which is that if you would do your best in the world, you must persuade yourself that you are doing it for some one you love. If that be true, and not make-believe, if there is somebody you love,—either here or there,—for whom you are really working, no lesson could be

better. But if that be the teaching of the tale, as, from the spiritual voice which is heard in its conclusion, we would fain hope, it should, we think, have been more directly put. Make- believe is of no use, even as a force to stir the will. He who tries to stir it so, knows that he is playing himself a trick, and therefore the powerful stimulus soon vanishes.

Again, the nonsense of this charming little book is playful non- sense, nonsense that makes the heart glad instead of weary, of which the following rhymes on a tea-party given by two little girls to a Japanese and two other dolls, will be sufficient proof :— " A nice little party we're seated at tea ;

The dollies all seem very glad,

Save the poor little thing which is leaning on me ; I fear that she feels rather bad ;

Poor limp little thing! she wants a back bone, She's only just made up of rag, There's little Miss Prim sitting up all alone, And the Japanese looks like a wag.

Now what shall we talk of, my own dollies fair ?

And what shall we give you for tea ?

That queer little thing with the short, frizzy hair, Why does he keep looking at me ? My sister and I we will sing you a song Before we get up from the table ; It shall not be sad, and it shall not be long— We'll sing it as well as we're able.

The darkness is stealing all over the place, The flowers are weeping for sorrow, The daisy is hiding its little round face, The Sun has gone seeking to-morrow.

So while you are seated all round the tea-table, Please join in the chorus as well as you're able ; 0! sing ! sing away for your life.

The darkness is hiding the birds on the trees, The thrushes are weary of singing, A strange little rumour is borne on the breeze Of Summer the swallows are bringing.

So while you are seated all round the tea-table, Please join in the chorus as well as you're able ; 0 ! sing ! sing away for your life.

The Summer is stealing all over the place, The wind is all scented with roses, The dear little birds are all flying a race, On purpose to give us their noses.

So while you are seated all round the tea-table, Please join in the chorus as well as you're able ; 0! sing ! sing away for your life.

Take it all in all, we have not seen a more charming little book for little children for many years. Here and there it ventures on a rather high flight of fancy, for young children ; but this is cer- tainly, if an error at all, an error of a much less serious kind than any flatness of conception,—any falling-short in ideal fancy,—would be. Children are almost all idealists.