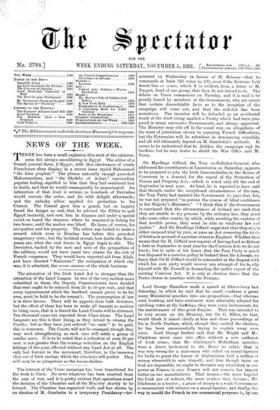 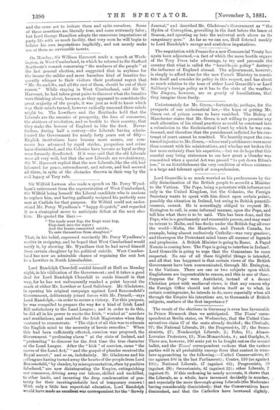 in which he said that he could condense a great many Ministerial speeches into one proposition,—that whereas cant, humbug, and false sentiment were admirably adapted for catching votes at the hustings, they were sorry instruments for the maintenance of this great Empire. That was intended to be very severe on the Ministry, but Sir G. Elliot, we fear, would think it aimed chiefly at him and those proceedings of his in North Durham, which, though they carried the election, he has been unsuccessfully trying to explain away ever since. Lord George further said that Mr. Bright and Mr. Gladstone never came into office without a new outbreak of Irish crime; that Mr. Gladstone's Midlothian speeches were a direct incitement to the Boers to rebel; that it was very wrong for a statesman who relied on moral barriers for India to grant the Ameer of Afghanistan half a million of money wherewith to arm himself; and that though taxes on food are impossible, we ought to threaten any retaliation in our power on France, in case France will not remove her import duties on our manufactures. That means,—the more hopeful the Irish are of redress, the more restless they become; Mr. Gladstone is a traitor; a grant of money to a weak Government is inconsistent with reliance on a moral barrier; and finally, the way to mould the French to our commercial purposes is, by one

and the same act to irritate them and spite ourselves. Some of these assertions are literally true, and some extremely false ; but Lord George Hamilton adopts the rancorous imputations of party life with so much facility, that very soon he will begin to believe his own imputations implicitly, and not merely make use of them as serviceable taunts.