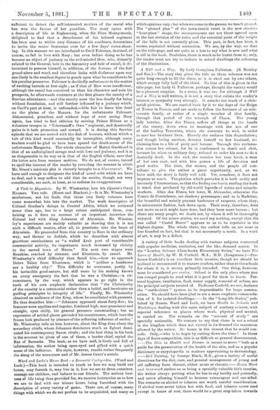 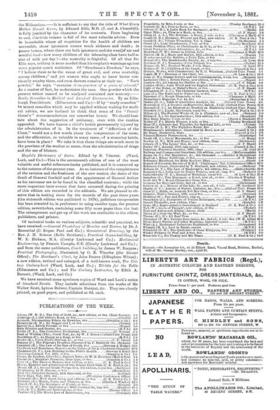 A variety of little books dealing with various subjects connected

with popular medicine, sanitation, and the like, demand notice. In the "London Science Class-books Elementary Series," we have The Laws of Health, by W. H. Corfield, M.A., M.D. (Longmans.)—Pro- fessor Corfield's is an excellent little treatise, though we should be inclined to recommend it to mature readers, rather than to the schools for whom it is, it seenis, primarily intended. One thing, however, must be considered per contra. School is the only place where you can compel people to read what it is good for them to know. Per- sonal hygiene, ventilation, food, water supply, removal of refuse, are the principal subjects treated of. Professor Corfield, we see, declares the " earth-closet " system to be impracticable for large commu- nities. We should have been glad to see a more emphatic commenda- tion of it for isolated dwellings.—In the "Long-life Series," pub- lished by Messrs. Ward and Lock, we have Health in Schools and Workshops, dealing with this same subject of sanitary science, with especial reference to places where work, physical and mental, is carried on. The remarks on the "amount of study" are specially noticeable. We venture to say that there is not a school in the kingdom which does not exceed in its demand the maximum allowed by the writer. Six hours is the utmost that he would con- cede. Only,—who is to begin by cutting down the time ? In these days of fierce competition, this is as difficult as general disarmament.

The Skin in Health and Disease is meant to serve "both as a guide for the preservatien of the health of the skin, and as a popular dictionary or encycloptedia in matters appertaining to dermatology. —Sick Nursing, by George Black, M.B., gives a variety of useful directions for the diet, care, and general management of young and old suffering from disease, either acute or chronic.—Brain Work and Over-work strikes us as being a specially valuable little treatise, the writer always putting what he has to say lucidly and pointedly, and never allowing himself to become extravagant and one-sided. The remarks on alcohol or tobacco are worth careful consideration. If alcohol were never taken but with food, and tobacco never used except in hours of rest, there would be a great step taken towards the Millenniarn.—It is sufficient to say that the title of What Every Mother Should Know, by Edward Ellis, M.D. (J. and A. Churchill),

is fully justified by the character of its contents. From beginning to end, this little volume is full of the most valuable advice. Even

in households where all requisites for the health of children are accessible, sheer ignorance causes much sickness and death ; in poorer homes, where there are both ignorance and the want:of air and needful food—how many children of the labouring-class have half-a- pint of milk per day ?—the mortality is frightful. Of all that Dr. Ellis says, nothing is more needed than his emphatic warnings against some popular quack medicines. Of " Steedman's Powders," he says, "I believe these to be the cause of great evil, and even mortality, among children ;" and yet women who ought to know better con- tinually employ them, and even doctors connive at their use. "Each powder," he says, "contains three-quarters of a grain of calomel!' As a matter of fact, he understates the case. One powder which the present writer caused to be analysed contained raw mercury. Ready Remedies in Medical and Surgical Emergencies. By an Edin- burgh Practitioner. (Ed monston and Co.)—If by "ready remedies" he meant remedies which may be applied without waiting for medi- cal advice, we are inclined to think that some of the "Practi- tioner's " recommendations are somewhat heroic. We should hesi- tate about the suggestion of antimony, even with the caution appended. We have known a child's health permanently injured by the administration of it. In the treatment of "Affections of the Chest," would not a few words about the temperature of the room, and the allievation, so valuable in many cases, of a steaming kettle, have been in place ? We take it that these things are much more in the province of the mother or nurse, than the administration of drugs and the use of blisters.