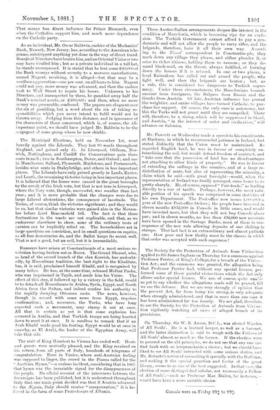 The Municipal Elections, held on November 1st, went heavily against

the Liberals. They lost 90 wards throughout England, and gained only 4:3. In Liverpool, Oldham, Nor- wich, Nottingham, and Cardiff the Conservatives gain three seats in each ; two in Southampton, Dover, and Oxford ; and one in Manchester, Salford, Plymouth. Maidstone, and Portsmouth, besides nine seats in Staleybridge, and others in less important places. The Liberals have only gained greatly in Leeds, Exeter, and Loath, the remaining victories being in less important places. It is believed that the losses were ceased in the great boroughs 4sy the revolt of the Irish vote, but 'that is not true in Liverpool, where the Tory vote, though, successful, was smaller than last year ; and it is more probable that the changes were due to large Liberal abstentions, the consequence of lassitude. The Tories, of course, think the victories significant; and they would be so, but that similar victories were gained also in the Novem- ber before Lord Beaconsfield fell. The fact is that these fluctuations in the wards are not explicable, and that, as we endeavour elsewhere to show, none of the ordinary tests of opinion can be implicitly relied on. The householders act in large questions on conviction, and in small questions on caprice, as all free democracies do, and the Ballot keeps its secret well. That is not a good, but an evil, but it is irremediable.