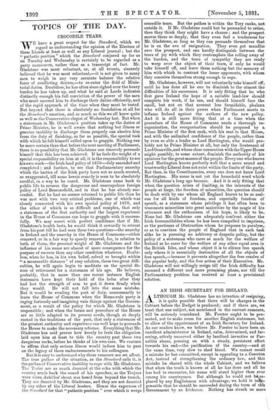 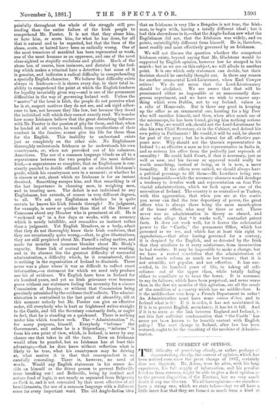 AN IRISH SECRETARY FOR IRELAND.

ALTHOUGH Mr. Gladstone has no intention of resigning, it is qnite possible that there will be changes in the Cabinet before the Budget is produced; and if there are, we trust that one subject, not mentioned in the current rumours, will be seriously considered. Mr. Forster ought to be pro- moted, not to make room for another English statesman, but to allow of the appointment of an Irish Secretary for Ireland. As our readers know, we believe Mr. Forster to have been an excellent administrator in Ireland, calm, determined, and far- seeing, utterly unmoved either by landlord invective or Par- nellite abuse, pressing on with a steady, persistent effort towards his end—the pacification of the country—and at the same time, very slow to shed blood. We cannot recall a mistake he has committed, except in appealing to a Coercion Act, instead of strengthening the ordinary law, and this mistake he shared with the whole Cabinet, and we believe that when the truth is known of all he has done and all he has had to encounter, his name will stand higher than ever among his countrymen. But although he could not e- placed by any Englishman with advantage, we hold it in pensable that he should be succeeded during the term of th Government by an Irishman. Nothing has struck UB more

painfully throughout the whole of the struggle still pro- ceeding than the entire failure of the Irish people to comprehend Mr. Forster. It is not that they abuse him, or hate him, or scorn him, for what be has done, for all that is natural and to be expected, but that the lines of the abuse, scorn, or hatred have been so radically wrong. One of the most tenacious of mankind has been represented as weak, one of the most humane as an oppressor, and one of the most clear-sighted as stupidly credulous and pliable. Much of the abuse has, of course, been insincere, and dictated by the feel- ing which makes a criminal hate a detective ; but some of it is genuine, and indicates a radical difficulty in comprehending a specially English character. We believe that difficulty exists always in Irishmen—it is shown every day, in their total in- ability to comprehend the point at which the English fondness for legality invariably gives way—and is one of the permanent difficulties in the way of governing Ireland well. Unless the "master" of the hour is Irish, the people do not perceive what he is at, suspect motives they do not see, and ask rigid adher- ence to law, not because they like law, but because they dread the individual will which they cannot exactly read. We wonder how many Irishmen believe that the great disturbing influence with Mr. Forster is the passion of pity for them, and that, when he landed at all events, he would, from recollections of their conduct in the famine, sconer give his life for them than for the English. This inability to understand exists just as completely on the other side. No Englishman thoroughly understands Irishmen as he understands his own countrymen, or, when not provoked out of his calmness, Americans. The use of a common language blinds us all to a separateness between the two peoples of the most definite kind,--a separateness so complete, that an Englishman is con- stantly puzzled to decide offhand on an educated Irishman's grade, which his countryman sees in a moment; or whether he is sincere or not, about which no Irishman is for an instant deceived. Something escapes him, and that something is of the last importance in choosing men, in weighing men, and in trusting men. The defect is not individual to any Englishman, but extends, of course in very different degrees, to all. We ask any Englishman whether he is quite certain he knows his Irish friends through ? No judgment, for example, is surer or quicker than that of the House of Commons about any Member who is prominent at all. He is "reckoned up" in a few days or weeks, with an accuracy which is nearly infallible, and resembles an instinct rather than a judgment. Yet English Members, as a body, admit that they do not thoroughly know their Irish confreres, that they are occasionally quite wrong,—that, to give illustrations, they are still perplexed about Mr. Parnell's ruling motive, and made for months an immense blunder about Mr. IIealy's capacity. Some link of mutual understanding was wanting, and in its absence lies the greatest difficulty of successful administration, a difficulty which, be it remembered, there is nothing in the organisation of Ireland to diminish. There never was a place where it was so difficult to collect exact information,—a statement for which we need only produce one bit of evidence. We English have been in Ireland for six hundred years, and yet no Irish grievance ever becomes grave without our statesmen feeling the necessity for a sincere Commission of Inquiry, or without that Commission being genuinely astonished by the evidence itself collects. The admini- nistration is centralised to the last point of absurdity, till at this moment nobody but Mr. Forster can give an effective order, till everybody who is hurt or frightened writes straight to the Castle, and till the Secretary constantly feels, or ought to feel, that he is standing on a quicksand. There is nothing under him which touches rock. The " Administration " is, for many purposes, himself. Everybody "informs the Government, and unless he is a Stipendiary, "informs" it from his own point of view, which, in Ireland, is never by any chance one that takes in all the facts. Even an Irishman would often be puzzled, but an Irishman has at least this advantage,—that he does know without reflection what is likely to be true, what his countrymen may be driving at, what motive it is that that correspondent is so carefully concealing. There is, however, no need of words. Would any English statesman in his senses de- cide cal himself as the fittest person to prevent Belleville from breaking out ? and Belleville, being by instinct and nature fond of logic, is not nearly so separated from Belgravia as Cork is, and is not concealed by that most effective of all bewilderments, the use of a common language with a different sense for every important word. The old Anglo-Indian idea that an Irishman is very like a Bengalee is not true, the Irish- man, to begin with, having a totally different ideal ; but it had this shrewdness in it,—that the Anglo-Indian saw what the Englishman did not, that the Irishman was widely, and on points, unintelligibly different from himself. He is, therefore, most readily and most effectively governed by an Irishman.

We will not discuss the question whether the competent Irishman exists, beyond saying that Mr. Gladstone would be supported by English opinion, however low he stooped in his search ; but as we are on this subject, we will allude to another point. It is one which only statesmen can decide, but their decision should be carefully thought out. Is there any reason for another ornamental Lord-Lieutenant, when Earl Cowper retires ? We do not mean that the Lord-Lieutenancy should be abolished. We are aware that that will be pronounced either an impossible or an unnecessarily dan- gerous experiment, and we have no wish to remove any- thing which even Dublin, not to say Ireland, values as a relic of Home-rule. But is there any good in keeping up the office as an ornamental one, hunting for a big Peer who will sacrifice himself, and then, when after much use of the microscope, he has been found, giving him nothing serious to do ? Why, we would ask, should not the Lord-Lieutenant be also his own Chief Secretary, sit in the Cabinet, and defend his own policy in Parliament ? He would, it will be said, be absent for part of the year ; but he is absent for all effective pur- poses now. Why should not the Queen's representative in Ireland b3 as effective a man as her representative in India is, and so redeem his office from the perfectly just reproach of unreality ? He could hold Court, if that is necessary, just as well as now, and his favour or approval would really be worth something, instead of being, as it is now, a mere formality. If the offices were united, we should always have a political personage to fill them—Mr. Lowthers being ren- dered impossible—while the necessary absences would develope a tendency to devolve work and representation on four Pro- vincial administrations, which we look upon as one of the necessities of Ireland. The country is as centralised as Turkey, with this aggravation, that when you are at the centre you never can find the true depositary of power, the great officer who is always there being the mere mouth-piece of the lesser officer, who may be there or not. There never was an administration in theory so absurd, and those who allege that "it works well," contradict patent facts. It does not work well, for it leaves the substantial power to the Castle," the permanent Office, which has governed as we see, and which has at least this right to opprobrium,—that after having governed for a century, it is despised by the English, and so detested by the Irish that they attribute to it every misfortune, from insurrection to bad weather. It may be impossible to make a change, but we have a rooted conviction that the administration of Ireland needs reform as much as her tenure; that it is not scientific, not popular, and not effective. It has suc- ceeded, in its hundred years of life, in taking all self- reliance out of the upper class, while totally failing either to conciliate or to tame the lower. It is nonsense to say its failures, which have been perpetual, and never worse than in the first six months of this agitation, are all the result of the condition of a country which has no middle-class. Is it the middle-class who keep a French Department in order?

An Administration must have some raison detre, and in Ireland what is it ? If it is order, it has not maintained it. If it is to protect English ascendancy, it has let it fall. And if it is to serve as the link between England and Ireland, is not this fact sufficient condemnation that "the Castle" has never yet been known to be heartily content with English policy ? The next change in Ireland, after law has been restored, ought to be the remaking of the machine of Adminis- tration.