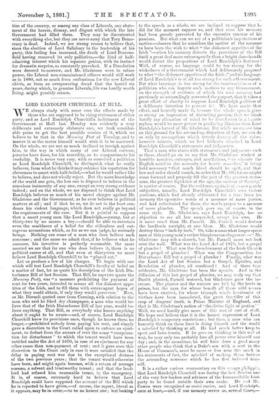 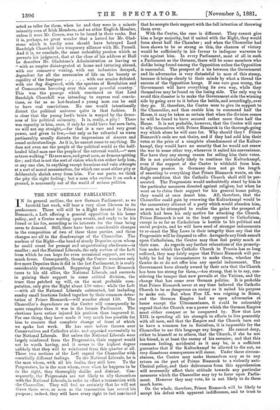 WE always study with some care the efforts made by those who are supposed to be rising statesmen of either party, and as Lord Randolph Churchill's indictment of the Government at Hull last Monday was evidently a very deliberate and extremely elaborate one, we took consider- able pains to get the best possible version of it, which we believe to be that in the Morning Post of Tuesday, and to master it as the orator himself would wish it to be mastered. On the whole, we are not so much inclined to inveigh against him, in the way in which many of our Liberal contem- poraries have done, for his scurrility, as to compassionate his credulity. It is never very easy, with so conceited a politician as Lord Randolph Churchill, to distinguish what he really

believes, from what he thinks it may enhance his reputation for cleverness to assert with half-belief,—what he would rather like to believe, and does not wholly reject. But the more knowledge of the world one gets, the less one is disposed to believe in the conscious insincerity of any one, except on very strong evidence indeed ; and on the whole, we are disposed to think that Lord Randolph believes as much of his moral charges against Mr. Gladstone and the Government, as he ever believes in political

matters at all ; and if that be so, we do not in the least con- demn his violent language, which does not really go beyond the requirements of the case. But it is painful to suppose that a smart young man like Lord Randolph,—young, but at thirty-two by no means a boy,—should be able to entertain even the semblance of a belief for the ridiculous and out- rageous accusations which, as far as we can judge, he seriously brings. Nothing can come of a man who does believe such nonsense ; and the more we admit that, if he believes what he assumes, his invective is perfectly reasonable, the more assured we are that for one who does believe it, there is no political career at all, and that even at thirty-two we must believe Lord Randolph Churchill to be "played out."

Let us produce a few of his charges. To begin with one which will test Lord Randolph Churchill's faculty of belief on a matter of fact, let us quote his description of the Irish Dis- turbance Bill of last Session. That Bill, he says (we quote the Morning Post), was "a measure prohibiting the payment of rent for two years, intended to arouse all the dishonest appe- tites of the Irish, and to fill them with extravagant hopes of what they could obtain, if only they would persevere." Now, as Mr. Disraeli quoted once from Canning, with relation to the man who said he liked dry champagne, a man who would be- lieve that of the Irish Disturbance Bill of last year, would be- lieve anything. That Bill, as everybody who knows anything about it ought to be aware—and, of course, Lord Randolph Churchill knew its provisions once, though he knows them no longer,—prohibited nobody from paying his rent, and simply gave a discretion to the Court called upon to enforce an eject- ment, to deduct from the arrears of rent the same "compensa- tion for disturbance" to which the tenant would have been entitled under the Act of 1870, in case of an ejectment for any other cause than non-payment of rent ; and it gave even this discretion to the Court only in case it were satisfied that the delay in paying rent was due to the exceptional distress of the two previous years ; that the tenant would otherwise have been, and might again become, with a return of average seasons, a solvent and trustworthy tenant ; and that the land- lord had refused him reasonable terms, in the emergency. It is, of course, extremely hard to believe that Lord Randolph could have supposed the account of the Bill which he is reported to have given,—of course, the report, literal as it appears, may be in error,—to be an honest one ; but looking

to the speech as a whole, we are inclined to suppose that he did for the moment suppose so, and that even his memory had been grossly perverted by the excessive rancour of his passions. But what can we say of a politician's imputations of motive—observe that he considers the motive of the measure to have been the wish to whet " the dishonest appetites of the Irish "—when his memory distorts the provisions of the Bill itself a great deal more extravagantly than a bright door-handle would distort the proportions of Lord Randolph's features ?

on the strength of evidence of which his own memory had previously so astoundingly perverted the purport, that it takes a

great effort of charity to suppose Lord Randolph guiltless of a deliberate intention to pervert it ? We have made that effort, and honestly made it, because the whole speech gives so strong an impression of disturbing passion, that we think hardly any alienation of mind to be found even in a limatic asylum would be more potent in producing illusions than Lord Randolph's hatred of Mr. Gladstone. But while we excuse him on this ground for his astounding distortion of fact, we can do so only by assumptions which utterly destroy all the value. however minute, which we had hitherto attached to Lord Randolph Churchill's statements and judgments.

That a man who starts with statements and judgments such as these, should go on to say that Mr. Gladstone winked at horrible murders, outrages, and mutilations, " to educate the English mind to the necessity for heroic remedies," it being held necessary "that much blood should be spilt, and that law and order should vanish, in order that Mr. Gladstone might come forward and properly fill the part of the greatest states- man, the greatest legislator of the age, the saviour of Society,"

is matter of course. But the evidence, again, is of coarse purely subjective, namely, Lord Randolph Churchill's own violent passions, which had already obliterated for a time from his memory the operative words of a measure of mere justice, and had substituted for them the words proper to a measure

of mere plunder. The speech goes on, of course, in the same style. Mr. Gladstone, says Lord Randolph, has no

Disturbance Bill but a gospel of plunder ? Finally, what was the Land Act of last Session but a Gospel, Epistles, and Revelation of plunder, all combined ? And of these four robberies, Mr. Gladstone has been the apostle. And in the diffusion of this last gospel of plunder, we may truly say that Davitt planted, Parnell watered, but Gladstone gave the in- crease. The planter and the waterer are laid by the heels in prison, but the man for whose benefit all these wild scenes have been enacted, for whose triumph whole hecatombs of victims have been immolated, the great fructifier of this crop of dragons' teeth, is Prime Minister of England, and that is Mr. Gladstone's notion of the divine light of justice.'" Well, we need hardly give more of this sort of sort of stuff. We hope and believe that it is the honest expression of Lord Randolph's temporary convictions ; but then, a man who can honestly think on these lines is doing himself and the world a mischief by thinking at all. He had much better keep to sport and lawn tennis. If he goes on thinking in this sort of way, he may only too probably lose all power over himself one day ; and, in the meantime, he will have done a good many other people who think that a Duke's son with a seat in the House of Common's, must be more or less near the mark in his statements of fact, the mischief of making them believe the astounding nonsense which he has first believed him- self.

It is a rather curious commentary on this savage philippic, that Lord Randolph Churchill was during the last Session one of the very few leaders and advisers of the Irreconcilable Irish party to be found outside their own ranks. Ho and Mr. Cowen were recognised as amid curiae, and Lord Randolph, once at least,—and, if our memory serves us, several times,— minority even of Irish Members, and no other English Member, unless it were Mr. Cowen, was to be found in their ranks. But it is, perhaps, no great wonder that a hatred for Mr. Glad- stone which is hardly sane should have betrayed Lord Randolph Churchill into temporary alliance with Mr. Parnell. And it is, we conclude, the same unhealthy passion which so perverts his judgment, that at the close of his address at Hull he describes Mr. Gladstone's Administration as leaving us "with an empire disintegrated at home and tottering abroad, with our commerce waning, with our industries °decayed, dependent for all the necessaries of life on the bounty or

cupidity of the foreigner with our armies defeated, with our flag disgraced, with the spectres of Revolution and of Communism hovering over this once peaceful country." This was the passage which convinced us that Lord Randolph Churchill was intending to express real convic- tions, so far as so hot-brained a young man can be said to have real convictions. No one would intentionally distort the political universe quite in that fashion. It is clear that the young lord's brain is warped by the fierce- ness of his political animosity. It is, really, a pity ! There was capacity in him, once, if only he could have but seen facts, we will not say straight,—for that is a rare and very great power, and given to few,—but only so far refracted as warm partisanship usually distorts the impressions of sincere and sound understandings. As it is, he cannot come to anything. He does not even see the people of the political world as the half- healed blind man saw the people of the external world,—" men as trees walking." He sees men, and great men, as demons spitting fire ; and that is not the sort of vision which can either help him, or any one else, to anything except ferocious and vain attempts at a sort of moral assassination, for which one must either pity or deliberately shrink away from him. For our parts, we think the pity the right feeling ; but a man who excites it on such a ground, is necessarily out of the world of serious politics.