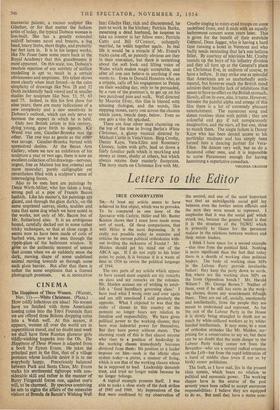 The Happiness of Three Women. (Warner, Nov. 11)—White Christmas. (Plaza.) How oddly infectious are ideas! No sooner have we finished with three Americans tossing coins into the Trevi Fountain than we are offered three Britons dropping coins Into a Welsh well. At this season, it appears, women all over the world are in superstitious mood, and no doubt next week we shall have three Russian glamour girls tiddly-winking kopecks into the Ob. The Happiness of Three Women is adapted from a book by Eynon Evans. He takes the principal part in the film, that of a village postman whose laudable desire it is to see evçrybody happy. Precariously balanced between Puck and Santa Claus, Mr. Evans walks his sentimental tightrope with con- siderable skill and rather in the manner of Barry Fitzgerald forces one, against one's will, to be charmed. By specious contriving he sets to rights the affairs of the miserable visitors at Brenda de Banzie's Wishing Well Inn: Gladys Hay, rich and discontented, he puts to work in the kitchen; Patricia Burke, mourning a dead husband, he inspires to take an interest in her fellow men; Patricia Cutts and Bill O'Connor, unhappily married, he welds together again. In real life it would be a miracle if Mr. Evans's tricks came off, so patently obvious are they in their execution, but there is something about the soft look and lilting voice of Wales which makes magic acceptable, and after all one can believe in anything if one wants to. Even in Donald Houston who, as a cripple, calls off his engagement to Petula on their wedding day, only to be persuaded, by a ruse of the postman's, to get up on his two paralysed pins and walk. Well directed by Maurice Elvey, this film is blessed with amusing dialogue, and the words, like stepping stones, carry one across the chasms which yawn, treacle deep, below. Even so one gets a tiny bit splashed.

There are four silver stars clustering on the top of the tree in Irving Berlin's White Christmas, a glossy musical directed by Michael Curtiz in VistaVision. Bing Crosby, Danny Kaye, Vera-Ellen and Rosemary Clooney, laden with gifts, lead us down a fairly familiar path which is sparkling and snowy at times, slushy at others, but which always retains their masterly footprints. The story starts on Christmas Eve with Mr. Crosby singing to misty-eyed troops on some undefined front, and it ends with an equally lachrymose concert some years later. This is given for the benefit of their erstwhile General, Dean Jagger, who is having a hard time running a hotel in Vermont and who badly needs reminding that he's one helluva feller. By courtesy of television Mr. Crosby rounds up the boys of his infantry division and they all turn up at the General's place on Christmas Eve, in uniform of course, to have a bellow. It may strike one as splendid that Americans are so unabashedly senti- mental, but however much the British mind admires their healthy lack of inhibitions this seems to have no effect on the British stomach. Slowly, all on its own, alas, it turns. However, between the painful alpha and omega of this film there is a lot of extremely pleasant entertainment. The numerous song and dance routines shine with polish ; they are colourful and gay if not conspicuously imaginative, and the stars, all but one, shine to match them. The single failure is Danny Kaye who has been denied access to his particular madness and has simply been turned into a dancing partner for Vera- Ellen. He dances very well, but so do a thousand other men, and it is impossible to curse Paramount enough for having hamstrung a superlative comedian.