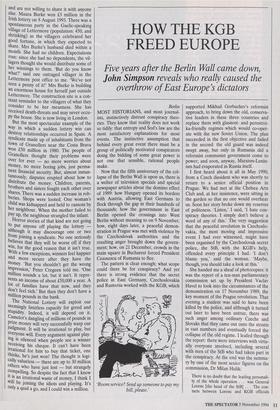 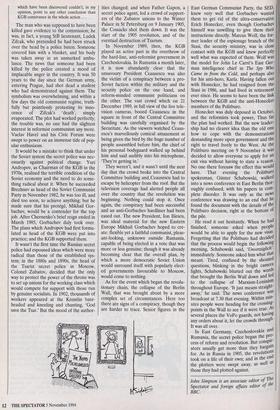 HOW THE KGB FREED EUROPE

Five years after the Berlin Wall came down,

Berlin MOST HISTORIANS, and most journal- ists, instinctively distrust conspiracy theo- ries. They know that reality does not work so tidily: that entropy and Sod's law are the most satisfactory explanations for most events. The instinctive assumption that behind every great event there must be a group of politically motivated conspirators doing the bidding of some great power is not one that sensible, rational people make.

Now that the fifth anniversary of the col- lapse of the Berlin Wall is upon us, there is a welter of television specials and special newspaper articles about the domino effect of 1989: how Hungary opened its borders with Austria, allowing East Germans to flock through the gap in their hundreds of thousands; how the government in East Berlin opened the crossings into West Berlin without meaning to on 9 November; how, eight days later, a peaceful demon- stration in Prague was met with violence by the Czechoslovak authorities and the resulting anger brought down the govern- ment; how, on 21 December, crowds in the main square in Bucharest forced President Ceausescu of Rumania to flee.

The pattern is clear enough; what scope could there be for conspiracy? And yet there is strong evidence that the secret police in East Germany, Czechoslovakia and Rumania worked with the KGB, which 'Room service? Send up someone to pay my bill, please.' supported Mikhail Gorbachev's reformist approach, to bring down the old, conserva- tive leaders in these three countries and replace them with glasnost- and perestroi- ka-friendly regimes which would co-oper- ate with the new Soviet Union. The plan succeeded in the first objective and failed in the second: the old guard was indeed swept away, but only in Rumania did a reformist communist government come to power; and soon, anyway, Marxism-Lenin- ism had evaporated in Russia itself.

I first heard about it all in .May 1990, from a Czech dissident who was shortly to return to a senior official position in Prague. We had met at the Chelsea Arts Club and, at her insistence, were sitting in the garden so that no one would overhear us. Soon her story broke down my reserves of politeness. 'Listen,' I said, 'I hate con- spiracy theories. I simply don't believe a word of any of this.' The very suggestion that the peaceful revolution in Czechoslo- vakia, the most moving and impressive event I had ever witnessed, might have been organised by the Czechoslovak secret police, the StB, with the KGB's help, offended every principle I had. 'I don't blame you,' said the woman. `Maybe, though, you should take a look at this.'

She handed me a sheaf of photocopies: it was the report of a ten-man parliamentary commission set up by President Vaclav Havel to look into the circumstances of the demonstration on 17 November 1989, the key moment of the Prague revolution. That evening a student was said to have been killed by the police, and although it turned out later to have been untrue, there was such anger among ordinary Czechs and Slovaks that they came out onto the streets in vast numbers and eventually forced the collapse of the old regime. I leafed through the report: there were interviews with virtu- ally everyone involved, including several with men of the StB who had taken part in the conspiracy. At the end was the summa- ry by one of the most senior figures on the commission, Dr Milan Hulik:

There is no doubt that the leading personali- ty of the whole operation ... was General Lorene [the head of the StB] ... The con- tacts between Lorenc and KGB officials which have been discovered couldn't, in my opinion, point to any other conclusion than KGB connivance in the whole action .

The man who was supposed to have been killed gave evidence to the commission; he was, in fact, a young StB lieutenant, Ludek Zifcak, who pretended he had been struck over the head by a police baton. Someone covered him with a blanket, and his body was taken away in an unmarked ambu- lance. The news that someone had been killed by the police created a mood of implacable anger in the country. It was 50 years to the day since the German army, entering Prague, had shot dead a student who had demonstrated against them. The symbolism was overwhelming, and within a few days the old communist regime, truth- fully but pointlessly protesting its inno- cence of Zifcak's 'death', simply evaporated. The plot had worked perfectly; the trouble was, no one had the slightest interest in reformist communism any more. Vaclav Havel and his Civic Forum were swept to power on an immense tide of pop- ular enthusiasm.

It would be a mistake to think that under the Soviet system the secret police was nec- essarily against political change. Yuri Andropov, as Chairman of the KGB in the 1970s, realised the terrible condition of the Soviet economy and the need to do some- thing radical about it. When he succeeded Brezhnev as head of the Soviet Communist Party in November 1982, he was too ill, and died too soon, to achieve anything; but he made sure that his protégé, Mikhail Gor- bachev, would be a contender for the top job. After Chernenko's brief reign ended in March 1985, Gorbachev duly took over. The plans which Andropov had first formu- lated as head of the KGB were put into practice; and the KGB supported them.

It wasn't the first time the Russian secret police had espoused ideas which were more radical than those of the established sys- tem; in the 1880s and 1890s, the head of the Tsarist secret police in Moscow, Colonel Zubatov, decided that the only way to protect the power of the throne was to set up unions for the working class which would compete for support with those run by genuine socialists. In 1902, thousands of workers appeared at the Kremlin bare- headed and kneeling and chanting, 'God save the Tsar,' But the mood of the author- ities changed; and when Father Gapon, a secret police agent, led a crowd of support- ers of the Zubatov unions to the Winter Palace in St Petersburg on 9 January 1905, the Cossacks shot them down. It was the start of the 1905 revolution, and of the eventual destruction of Tsarism.

In November 1989, then, the KGB played an active part in the overthrow of the hard-line, anti-reformist government in Czechoslovakia. In Rumania a month later, it is now abundantly clear that the unsavoury President Ceausescu was also the victim of a conspiracy between a pro- Soviet faction within the military and the security police on the one hand, and reform-minded communist politicians on the other. The vast crowd which on 21 December 1989, in full view of the live tele- vision cameras, booed Ceausescu in the square in front of the Central Committee building was carefully organised by the Securitate. As the viewers watched Ceaus- escu's marvellously comical amazement at being given the bird by the huge number of people assembled before him, the chief of his personal bodyguard walked up behind him and said audibly into his microphone, `They're getting in.'

They weren't, and it wasn't until the next day that the crowd broke into the Central Committee building and,Ceausescu had to escape by helicopter from the roof. But the television coverage had alerted people all over the country that the revolution was beginning. Nothing could stop it. Once again, the conspiracy had been successful and an anti-Gorbachev hardliner had been eased out. The new President, Ion Iliescu, was ideal material for the new Eastern Europe Mikhail Gorbachev hoped to cre- ate: flexible yet a faithful communist, pleas- ant-looking, unknown outside Rumania, capable of being elected in a vote that was more or less genuine; though it was already becoming clear that the overall plan, by which a more democratic Soviet Union would surround itself with popularly elect- ed governments favourable to Moscow, would come to nothing.

As for the event which began the revolu- tionary chain, the collapse of the Berlin Wall, that was brought about by a more complex set of circumstances. Here too there are signs of a conspiracy, though they are harder to trace. Senior figures in the East German Communist Party, the SED, knew very well that Gorbachev wanted them to get rid of the ultra-conservative Erich Honecker, even though Gorbachev himself was unwilling to give them their instructions directly. Marcus Wolf, the for- mer leader of the espionage branch of the Stasi, the security ministry, was in close contact with the KGB and knew perfectly well what was expected of them. Wolf was the model for John Le Carre's East Ger- man intelligence chief in The Spy Who Came in from the Cold, and perhaps also for his anti-hero, Karla. Having fallen out with Honecker, he had resigned from the Stasi in 1986, and had lived in retirement ever since. He seems to have been the link between the KGB and the anti-Honecker members of the Politburo.

Honecker was duly deposed in October, and the reformists took power, Thus far the plan had worked. But the new leader- ship had no clearer idea than the old one how to cope with the demonstrations demanding more open government and the right to travel freely to the West. At the Politburo meeting on 9 November it was decided to allow everyone to apply for an exit visa without having to state a reason. No one there foresaw the effect this would have. That evening the Politburo spokesman, Giinter Schabowski, walked into a news conference in East Berlin thor- oughly confused, with his papers in com- plete disorder. It was only as the news conference was drawing to an end that he found the document with the details of the Politburo decision, right at the bottom of the pile. He read it out hesitantly. When he had finished, someone asked when people would be able to apply for the new visas. Forgetting that the Politburo had decided that the process would begin the following morning, Schabowski said, `Unverziiglich: immediately. Someone asked him what that meant. Tired, confused by the shouted questions, blinking in the bright camera lights, Schabowski blurted out the words that brought the Berlin Wall down and led to the collapse of Marxism-Leninism throughout Europe. 'It just means straight- away,' he said. The news conference was broadcast at 7.30 that evening. Within nun" utes people were heading for the crossing- points in the Wall to see if it were true. At several places the VoPo guards, not having any orders about it, let the crowds through. It was all over. In East Germany, Czechoslovakia and Rumania, the secret police began the pro- cess of reform and revolution. But conspir- ators usually get more than they bargain for. As in Russia in 1905, the revolutions took on a life of their own; and in the end the plotters were swept away, as well as those they had plotted against.

John Simpson is an associate editor of The Spectator and foreign affairs editor of the BBC.