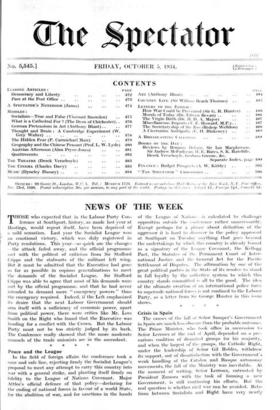 Page 1, 5 October 1934 — Peace and the League In the field of foreign affairs
Close

Peace and the League In the field of foreign affairs

the conference took a sane and safe line, rejecting firmly the Socialist League's proposal to--meet any attempt to carry this country into war with a general strike, and -planting itself firmly on fidelity to the League of Nations Covenant. Major Attlee's official defence of that policy—declaring for the ending of national forces in favour of a world State, for the abolition of war, and • for sanctions in the hands of the League of Nation; is calculated to challenge opposition outside the conference rather unnecessariK. Except perhaps for a phrase about definition of the aggressor it is hard to discover in the policy approved at Southport on Tuesday anything that goes beyond the undertakings by which this country is already 'wound as a signatory of the League Covenant, the Kellogg Pact, the Statutes of the Permanent Court of Inter- national Justice and the General Act for the Pacific Settlement of Disputes. The affirmation by one of the great political parties in the State of its resolve to stand in full loyalty by the collective system to which this country stands committed is all to the good. The idea of the ultimate creation of an international police force to supersede national forces is not confined to the Labour Party, as a letter from Sir George Hunter in this issue shows.