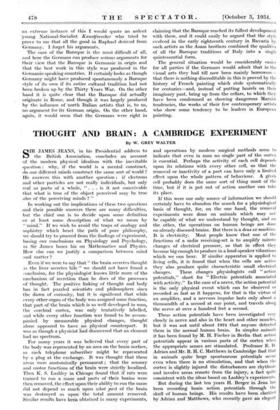 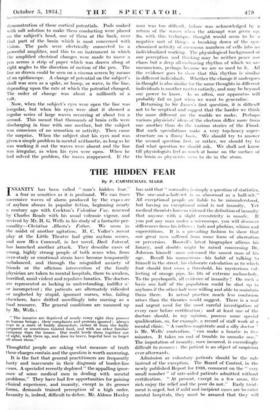 THOUGHT AND BRAIN: A CAMBRIDGE EXPERIMENT

SIR JAMES JEANS, in his Presidential address to the British Association, concludes an account of the modern physical idealism with the inevitable question : why, if the world is a mental construct, do our different minds construct the same sort of world ? He answers this with another question : if electrons and other particles are not really individuals, but only real as parts of a whole, " . . is it not conceivable that what is true of the object perceived may be true also of the perceiving minds ? "

In working out the implications of these two questions and their possible answers there are many difficulties, but the chief one is to decide upon some definition or at least some description of what we mean by " mind." If we wish to avoid the traps of analogy and sophistry which beset the path of pure philosophy, we should try to proceed from the findings of experiment, basing our conclusions on Physiology and Psychology, as Sir James bases his on Mathematics and Physics. How else can we justify a comparison between mind and matter ?

Even if we were to say that " the brain secretes thought ns the liver secretes bile " we should not have found a conclusion, for the physiologist knows little more of the mechanism of secretion than he does of the processes of thought. The positive linking of thought and body has in fact puzzled scientists and philosophers since the dawn of curiosity, but it is significant that while every other organ of the body was assigned some function, that part of the brain which is so well developed in man, the cerebral cortex, was only tentatively labelled, and while every other function was found to be accom- panied by measurable physical changes, thought' alone appeared to have no physical counterpart. It was as though a physicist had discovered that an element had no spectrum.

For many years it was believed that every part of the body was represented by an area on the brain surface, as each telephone subscriber might be represented by a plug at the exchange. It was thought that these areas were anatomically permanent ; that the sensory and motor functions of the brain were strictly localized. Then K. S. Lashley in Chicago found that if rats were trained to run a maze and parts of their brains were then removed, the effect upon their ability to run the maze :did not depend so much upon what part of the brain was destroyed as upon the total amount removed. Similar results have been obtained in many experiments, and operations by modern surgical methods seem to indicate that even in man no single part of the cortex is essential. Perhaps the activity of each cell depends upon its relations with every other cell, so that the removal or inactivity of a part can have only a limited effect upon the whole pattern of behaviour. A given cell probably does the same sort of thing most of the time, but if it is put out of action another can take its place.

If this were our only source of information we should certainly have to abandon the search for a physiological basis of thought, for, on the one hand, the removal experiments were done on animals which may not be capable of what we understand by thought, and on the other, the Operations on human beings are done on already diseased brains. But there is a deus ex machine. It is electricity. Most people know that one of the functions of a radio receiving-set is to amplify minute changes of electrical pressure, so that in effect they become big enough to produce in a loud-speaker vibrations which we can hear. If similar apparatus is applied to living cells, it is found that when the cells are active they also produce quite characteristic small electrical changes. These changes physiologists call " action potentials," short for " Electric potentials associated with activity." In the case of a nerve, the action potential is the only physical event which can be observed or recorded as fast as it happens, for that is the virtue of an amplifier, and a nervous impulse lasts only about a thousandth of a second at one point, and travels along the nerve at over a hundred feet a second.

These action potentials have been investigated very closely in nerve and also in the heart and other muscles, but it was not until about 1924 that anyone detected them in the normal human brain. In simpler animals it has been found by M. H. Fischer in Berlin that action potentials appear in various parts of the cortex when the appropriate senses are stimulated. Professor E. D. Adrian and Mr. B. H. C. Matthews in Cambridge find that in animals quite large spontaneous potentials occur even when there is no stimulation, and that when the cortex is slightly injured the disturbances are rhythmic and involve areas remote from the injury; a fact quite consistent with the ideas based on Lashley's experiments. But during the last ten years H. Berger in Jena has been recording brain action potentials through the skull of human beings. His results have been clarified by Adrian and Matthews, who recently gave au elegant demonstration of these cortical potentials. Pads soaked with salt solution to make them conducting were placed on the subject's head, one of them at the back, over that part of the brain which is most concerned with vision. The pads were electrically connected to a powerful amplifier, and this to an instrument in which the amplified electrical changes were made to move a pen across a strip of paper which was drawn along at right angles to the direction of motion of the pen. The line so drawn could be seen on a cinema screen by means of an epidiascope. A change of potential on the subject's skull was seen as a spike, or hump, or wave, in the line, depending upon the rate at which the potential changed. The order of change was about a millionth of a Volt, Now, when the subject's eyes were open the line was irregular, but when his eyes were shut it showed a regular series of large waves occurring at about ten a second. This meant that thousands of brain cells were discharging in time with one another, but the subject was conscious of no sensation or activity.. Then came the surprise. When the subject shut his eves and was given a simple problem in mental arithmetic, as long as he was working it out the waves were absent and the line was irregular, as when his eyes were open. When he had solved the problem, the waves reappeared. If the sum was too difficult, failure was acknowledged by a return of the waves when the attempt was given up. So, with this teelmione, thought would seem to be a negative sort of thing : a breaking down of the syn- chronized activity of enormous numbers of cells into an individualized working. The physiological background of our perception and thinking may be neither peace nor chaos but a deep all-embracing rhythm of which we are unconscious, perhaps because we are so used to it. All the evidence goes to show that this rhythm is similar in different individuals. Whether the change it undergoes in thought is also similar for the same thoughts in different individuals is another matter entirely, and may be beyond our power to know. As so often, our apparatus will probably fail us just when we want to generalize.

Returning to Sir James's first question, it is difficult not to be sceptical and suggest that the harder we think the more different are the worlds we make. Perhaps various physicists' ideas of the electron differ more from one another than do the various stories of the Flood. But such speculations make a very top-heavy super- structure on a flimsy basis. We should try to answer the second question first, or rather, we should try to find what question we should ask. We shall not know till phYsiologists feel as much at home on the surface of the brain as physicists seem to do in the atom.