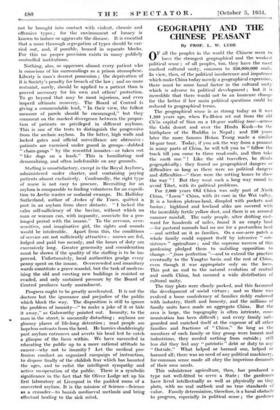 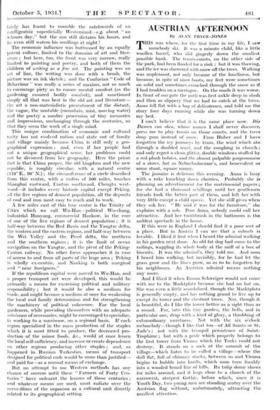 GEOGRAPHY AND THE CHINESE PEASANT

By PROF. L. W. LYDE OF all the peoples in the world the Chinese seem to have the strongest geographical and the weakest political sense ; of all peoples, too, they have the most marked cultural unity, common to 350,000,000 souls. In view, then, of the politiCal incoherence and impotence which make China today me-rely a geographical expression,. there must be some basal factor in the cultural unity' which is adverse to political development ; but it is incredible that • there' would not be an immense change for the better if her main political questions could be reduced to geographical terms.

The geographical sense is as strong today as it was 1,500 years ago, when Fa-Hsien set out from the old Ch'in capital of Sian on a 13-year walking tour—across the Gobi desert and over the Hindu Kush—to the birthplace of • the Buddha in Nepal ; and 250 years later the more famous Hstian Tsang made a similar 16-year tour. Today, if you ask the way from a peasant in many parts of China, he will tell you to " follow the track till- you come to three road-ends, and then take the north one " ! Like the old travellers, he thinks geographically ; they feared no geographical dangers or difficulties • so long as there were no political dangers and difficulties—" there were the rotting bones to show the way " ! But they went such a long way round to avoid Tibet, with its political problems.

For 2,000 years Old China was only part of North China, " Loess " China, with its core in the Wei valley. It is a broken plateau-land, dimpled with pockets and basins ; highland and lowland alike are covered with the incredibly fertile yellow dust, and there is an assured summer rainfall. The early people, after drifting east- ward for hundreds of miles, found it an empty land —for pastoral nomads had no use for a pastureless land —and settled on it as families. On a one-acre patch a whole family could support itself by intensive " sub- sistence " agriculture ; and the supreme "success of this gardening pledged them to unfailing opposition to change—"from perfection "—and to extend the practice eventually to the Yangtze basin and the rest of China, even though it was appropriate only on the - loess. This put an end to the natural evolution of central and south China, but ensured a wide distribution of cultural unity.

The tiny plots were closely packed, and this favoured the development of social virtues ; and so there was evolved a loose confederacy of. families richly endowed with industry, thrift and honesty, and the millions of family units have made an aggregate -China. But the area is large, the topography is often intricate, com- munication has been difficult ; and- every family safe- guarded and enriched itself at the expense of all other families and fractions' of " China." So long as the members of each family or tiny group were honest and industrious, they needed nothing from outside ; still less did they feel any " patriotic" debt or duty to any " Outside." What helped or harmed one, helped or -harmed all; there-was -no need of any political machinery, for common sense made all obey the imperious demands of their own • needs. , This subsistence agriculture, then, has produced a type not well-fitted to serve a State ; the gardeners have lived intellectually as -well as physically on tiny plots, with no real outlook and no true standards of value. - Family determinism, therefore, is a basal obstacle to progress, especially in political sense ; the gardener lately has learnt to mumble the catchwords of an intelligentsia superficially Westernized=e.g. about " all 8-hours day," but the sun still dictates his hours, and he even still waters his seedlings at night !

The economic influence was buttressed by an equally potent culture, limited to the domains of art and liter- ature ; but here, too, the front was very narrow, really limited to painting and poetry, and both of them the children of writing as a fine art. The painting was an art of line, the writing was done with a brush, the picture was an ink sketch ; and the Confucian " Code of Behaviour " was really a series of maxims, not so much to encourage piety as to ensure mental comfort (as the gardening ensured bodily comfort), and sanctioned simply all that was best in the old art and literature— the art a non-materialistic presentment of the distant, the- vague, the unstable (mountain, mist, moving water) and the poetry a sombre procession of tiny memories and impressions, unchanging through the centuries, so that they seem the work of a single mind.

This unique combination of economic and cultural unity has not evolved nation and state out of family and village mainly because China is still only a geo- graphical expression ; and, even if her people had not a unique geographical sense, her problems could not be divorced from her geography. Here the prime fact is that China proper, the old kingdom and the new republic, is roughly circular, with a natural centre (110° E., 30° N.) ; the circumference of a circle described from this centre, with a radius of 500 miles, touches Shanghai eastward, Canton southward, Chengtu west- ward—it includes every historic capital except Peking, all the five regions of densest population, all the deposits of coal and iron most easy to reach and to work.

A few miles east of this true centre is the Trinity of Cities which we call Wu-Han—political Wu-chang, industrial Hanyang, commercial Hankow, in the core of one of the five regions of densest population ; it is halfway between the Red Basin and the Yangtze delta, the western and the eastern regions, and half-way between the Wei Valley and the Pearl delta, the northern and the southern regions ; it is the limit of ocean navigation on the Yangtze, and the pivot of the Peking- Canton railway. No other focus approaches it in ease of access to and from all parts of the huge area ; Peking is wholly ex-centric, and Nanking is both marginal and " near foreigners."

If the republican capital were moved to Wu-Han, and a proper transport net were developed, this would be primarily a means for exercising political and military responsibility ; but it would be also a medium for trade; and might become a medium at once for weakening the local and family determinism and for strengthening the machinery of political coherence. For the local gardeners, while providing themselves with an adequate minimum of necessaries, might be encouraged to specialize, in working to a maximum, on a regional basis. If each region specialized in the mass production of the staples which it is most fitted to produce, the decreased pro- duction of the minor foods, &c., would at once lessen the local self-sufficiency, and increase or create dependence on other regions producing other staples ; and, as happened in Russian Turkestan, means of transport designed for political ends would be more than justified— and paid for—as a normal means of exchange.

But no attempt to use Western methods has any chance of success until these " Farmers of Forty Cen- turies " have unlearnt the lessons of those centuries ; and whatever means are used, must radiate over the nerve7fibres of the organism as a cultural unit directly related to its geographical setting.