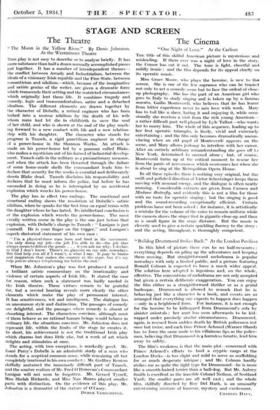 Page 15, 5 October 1934 — "Bulldog Drummond Strikes Back." At the London Pavilion In this
Close

"Bulldog Drummond Strikes Back." At the London Pavilion In this

kind of picture there can be no half-measures ; everything depends on piling up the adventures. and keeping them moving. But straightforward melodrama is popular nowadays with only a limited public, and a picture featuring Ronald Colman is expected to have a much wider appeal. The solution here adopted is ingenious and, on the whole. effective. The conventions of melodrama are not only accepted but given a certain deliberate exaggeration. You, can enjoy the film either as a straightforward thriller or as a genial burlesque. Drummond is allowed to remark that he is behaving just like a character in a book, and events are so arranged that everything one expects to happen does happen —only in a heightened form. For instance, it is not enough for the heroine to be kidnapped from Drummond's sofa by sinister orientals ; her aunt has soon afterwards to be kid- napped under precisely similar circumstances. Drummond, again, is rescued from sudden death by British policemen not once but twice, and each time Prince Acluned (Warner Oland) has to force the same smile to his villainous lips as the police- men, believing that Drunmiond is a harmless lunatic, lead hint away to safety.

. The film's weakness is that the main plot—concerned with Prince Achmed's efforts to land a cryptic cargo at the London Docks--is too slight and mild to serve as scaffolding for so much desperate intrigue ; and Mr. Colman hardly strikes me as quite the right type for Drummond—he is more like a sMooth-haired terrier than a bull-dog. But Mr. Aubrey Smith is excellent as the irascible Colonel Neilson, of Scotland Yard; the smaller parts are all well cast ; and the whole film, skilfully directed by Roy Del Ruth, is an unusually entertaining mixture of humour, mystery and excitement.