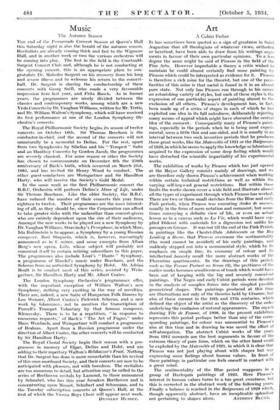 THE end of the Promenade Concert Season at Queen's Hall this Saturday night is also the herald of the autumn season. Recitalists are already coming thick and fast to the Wigmore Hill, and in another week or two the various orchestras will be coming into play. The first in the field is the Courtaul& Sargent Concert Club and, although he is not conducting at the opening concert, this is an appropriate place to con: gratulate Dr. Malcolm Sargent on his recovery from his long and severe illness and to welcome his return to the concert- hall. Dr. Sargent is sharing the conductorship of these concerts with Georg Sze% who made a very favourable impression here last year, and Fritz Busch. As in former years, the programmes are nicely divided between the classics and contemporary works, among which are a new Viola Concerto by Dr. Vaughan Williams, written for Mr. Tertis, and Mr. William Walton's Symphony, which will have received its first performance at one of the London Symphony Or- chestra's concerts.

The Royal Philharmonic Society begins its season of twelve concerts on October 18th. Sir Thomas Beecham is the conductor-in-chief, and the second of the 'concerts will not unnaturally be a memorial to Delius. For the rest, apart from two Symphonies by Sibelius and his " Tempest " Suite and an Hautboy Concerto by Gordon Jacob, the programmes are severely classical. For some reason or other the Society has chosen to commemorate on December 6th the 250th anniversary of Bach's birth, which occurred on March 21st, 1685, and has invited Sir Henry Wood to conduct. The other guest-conductors are Weingartner and Sir Hamilton Harty, who will receive the Society's Gold Medal.

In the same week as the first Philharmonic concert the B.B.C. Orchestra will perform Delius's Mass of Life, under Sir Thomas Beecham. Like the older Society, the B.B.C. have reduced the number of their concerts this year from eighteen to twelve. Their programmes are the most interest- ing of all, as they should be, since the Corporation can afford to take greater risks with the unfamiliar than concert-givers who are entirely dependent upon the size of their audiences, Amongst the new works to be played are a new Symphony by Dr. Vaughan Williams, Stravinsky's Persephone, in which Mme. Ida Rubinstein is to appear, a Symphony by a young Russian composer, Zuri Shaporin, which is, however, reassuringly announced as in C minor, and some excerpts from Alban Berg's new opera, Lulu, whose subject will probably not commend itself to certain retiring subscribers to this paper. The programmes also include Liszt's. " Dante " Symphony, a programme of Handel's music under Beecham, and the Scherzo from an unfinished Symphony by Hoist. Mr. Adrian Boult is to conduct most of this series, assisted by Wein- gartner, Sir Hamilton Harty and Mr. Albert Coates.

The London Symphony Orchestra's programmes offer, with the important exception of William Walton's new Symphony, nothing very exciting in the way of novelties. There are, indeed, a new Suite of Hungarian Folk Dances by Leo Weimer, Albert Coates's Pickwick Sdherzo, and a new work by Giazounov, not to mention the transcription of Purcell's Trumpet Voluntary by that famous composer, Klenovsky. There is to be a repetition, " in response to numerous requests," of Bach's " The Art of Fugue," under Hans Weisbach, and Weingartner will conduct a programme of Brahms. Apart from a Russian programme under the direction of Albert Coates, the other concerts will be conducted by Sir Hamilton Harty.

The Royal Choral Society begin their season with a pro- granune in memory of Elgar, Delius and Hoist, and are adding to their repertory Walton's Belshaz..-ar's Feast. Nothing that Dr. Sargent has done is more remarkable than his revival of this once moribund Society, and their concerts are now to be anticipated with pleasure, not with boredom The recitalists are too numerous to detail, but attention may be called to the series of Beethoven recitals by Lamind, to those announced by Schnabel, who has this year forsaken Beethoven and is concentrating upon Mozart, Schubert and Schumann, and to the Tuesday subscription concerts at Queen's Hall, at the first of which the Vienna Boys Choir will appear next week.