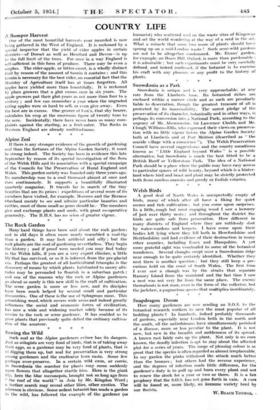 One of the ..most bountiful harvests ever recorded is now being gathered in the West of England. It is reckoned by a special inspector that the yield of cider apples in certain districts—of Dorset as well as Hereford and Devon—is up to the full limit of the trees. For once in a way England is self-sufficient in this form of produce. There may be even a Surplus. The eider-apple, or bitter-sweet, is a wholly distinct fruit by reason of the amount of tannin it contains ; and this tannin is necessary for the best cider, an essential fact that the Ministry of Agriculture itself has at times forgotten. All apples have yielded more than bountifully. It is reckoned by plum growers that a glut conies once in six years. The apple growers put their glut-years as not more than four to a century ; and few can remember a year when the ungraded eating apples were so hard to sell, or even give away. Even the best are in excess. One grower of tox's, that shy bearer, calculates his crop at the enormous figure of twenty tons to the acre. Incidentally, there have never been so many com- plaints against the starling, as a fruit-eater. The flocks in Western England are already multitudinous.