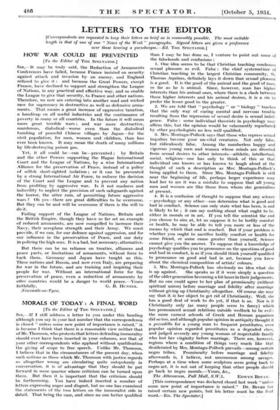 [Correspondents arc requested to keep their letters as brief as is reasonably possible. The most suitable length is that of one of our " News of the Week" paragraphs. Signed letters are given a preference over those bearing a pseudonym.—Ed. THE SPECTATOR.] HOW WAR COULD BE PREVENTED [To the Editor of THE SPECTATOR.] Sin,—It may be truly said, the Reduction of Armaments Conferences have failed, because France insisted on security against attack and invasion by an enemy, and England refused to give it : and because the Great Powers, except France, have declined to support and strengthen the League of Nations, in any practical and effective way, and so enable the League to give that security, to France and other nations. Therefore, we now are entering into another mad and wicked race for supremacy in destructive as well as defensive arma- ments. That means a great increase of oppressive taxation, a handicap on all useful industries and the continuance of poverty in many or all countries. In the future it will mean more great terrible wars ; and war more destructive, murderous, diabolical—worse even than the diabolical bombing of peaceful Chinese villages by Japan—for the civil population, for men, women and children, than . has ever been known. It may, mean the death of many millions

by life-destroying poison gas. • Yet, it all could be—can be—prevented ; by Britain and the other Powers supporting the Hague International Court and the League of Nations, by a wise International Alliance for the preservation of Peace, instead of a policy of selfish short-sighted isolation ; or it can be prevented by a strong International Air Force, to enforce the decision of the Court and the League and to prevent any nation from profiting by aggressive war. Is it not madness and imbecility to neglect the provision of such safeguards against the horror, the utter ruin, of permitting future aggressive wars ? Oh yes—there are great difficulties to be overcome. But they can be and will be overcome if there is the will to do it.

Failing support of the League of Nations, Britain and the British Empire, though they have so far set an example of reduced armaments, are now compelled to increase their Navy, their aeroplane strength and their Army. We must provide, if we can, for our defence against aggression, and for our influence in the preservation of Peace, and our duty in policing the high seas. It is a bad, but necessary, alternative.

But there can be no reliance on treaties, alliances and peace pacts, or limitations of armaments, without force to back them. Germany and Japan have taught us this. These nations and Russia, and now even Italy, are preparing for war in the future, and are training and inspiring their people for war. Without an international force for the preservation of peace, even a reduction of armaments by other countries would be a danger to world peace.—Yours