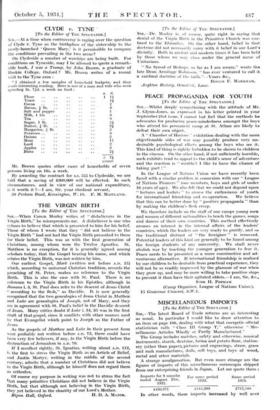 [To the Editor of THE SPECTATOR.] SIR,—Whilst deeply sympathizing with the attitude of Mr. J. Glynn-Jones, as expressed in his - letter printed in your September 21st issue, I cannot but feel that the -methods he advocates for producing peace-mindedness amongst the boys who attend his permanent camp at St. Athan are likely to defeat their own object.

A " Chamber of Horrors " exhibition dealing with the more objectionable sides of war may possibly produce very un- desirable psychological effects among the boys who see it. This kind of thing is rightly forbidden to be shown to children in the cinema. On the other hand, if not sufficiently horrible, Such exhibits tend to appeal to the child's sense of adventure and the reaction is " wouldn't I like to have the chance of taking part ! "

In the League of Nations Union we have recently been faced with a similar problem in connexion with our " League of Nations Pioneers " (our members, boys and girls of under 16 years of age). We also felt that we could not depend upon " lectures and leaflets " to arouse the enthusiasm of youth for international friendship and co-operation. We believe that this can be better done by " positive propaganda " than by making the children's flesh creep.

We therefore include on the staff of our camps young men and women of different nationalities to teach the games, songs and dances of their own countries. This method effectively arouses an interest in the internal affairs of the leaders' countries, which the leaders are very ready to gratify, and so the traditional distrust of " the foreigner " is removed. Potential leaders of this kind are generally to be found among the foreign students of any university. We shall never abolish war by teaching the younger generation to fear it. Peace needs to be presented as a more constructive and -ad- venturous alternative. If-international friendship is realized by our children to be desirable from practical experience, they will not be so readily impressed by the glamour of war when they grow up, and may be more willing to take positive steps to prevent it than have their agitated elders.—I am, Sir, &c.,