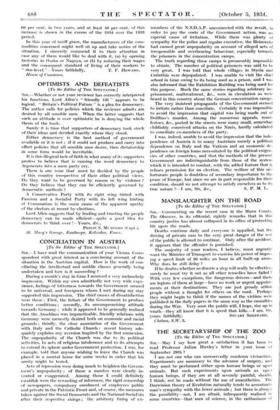 have read the communication of your Vienna Corre- spondent with great interest as a convincing account of the situation in the Austrian capital. How is the work of con- ciliating the intellectual and middle classes generally being undertaken and how is it succeeding ?

During a month's stay in Graz I received a very melancholy impression. Within my own admittedly not .very wide expe- rience, feelings of bitterness towards the Government seemed to be universal, and foreigners whom I met during my stay supported this impression. The chief causes of dissatisfaction were these : First, the failure of the Government to produce better conditions ; secondly, its uncompromising attitude towards Germany : while it appeared to be generally realized that the Anschluss was impracticable, friendly relations with Germany were earnestly desired both on economic and racial grounds ; thirdly, the close association of the Government with Italy and the Catholic Church : recent history ade- quately explains any aversion inspired by the first connexion. The unpopularity of the Church was due to its political activities, to acts of religious intolerance and to its attempts to extend its sphere under Government protection. I was, for example, told that anyone wishing to leave the Church was placed in a mental home for some weeks in order that his sanity might be tested.

Acts of repression were doing much to heighten the Govern- ment's unpopularity ; of these a number were clearly in- vented or exaggerated. Among those I "could definitely establish were the rewarding of informers, the rigid censorship of newspapers, compulsory enrolment of employees public and private in the Patriotic Front and, of course, the measures taken against the Social Democrats and the National Socialists after their respective risings ; the arbitrary fining of ex- members of the N.S.D.A.P. unconnected with the revolt, in order to pay the costs of the Government action, was an especial cause of irritation. While there was plenty of sympathy for the police and regular executive, the Heimwehr had earned great unpopularity on account of alleged acts of irresponsible and overbearing behaviour, especially towards the prisoners in the concentration camps.

The truth regarding these camps is presumably impossible to obtain. The number of political prisoners was said to be very great. I was told that whole villages in Styria and Carinthia were depopulated. I was unable to visit the chief school in Graz owing to its being used as a prison, and I was also informed that the Exhibition Building was being used for this purpose. Much the same stories regarding arbitrary im- prisonment, maltreatment, &c. were in circulation as were heard in this country about the German concentration camps.

The very insistent propaganda of the Government seemed to irritate rather than conciliate. Certainly it was impossible to avoid the impression that cipital was being made out of Dollfuss's murder. Among the numerous appeals, mani- festoes, &c., posted in the streets were many small, somewhat childishly conceived attacks on: the Nazis, hardly calculated to conciliate ex-members of the party.

I was, indeed, unable to avoid the impression that the inde- pendence of Austria is to many Austrians merely a political dependence on Italy and the Vatican and an economic de- pendence on foreign loans necessitated by the political exigen- cies of other countries, and that the methods of the present Government are indistinguishable from those of the system which it is intended to combat, with the added feature that it refuses permission for an election. The welfare of this un- fortunate people is doubtless of secondary importance to the peace of Europe, but since we are in part responsible for their condition, should we not attempt to satisfy ourselves as to its