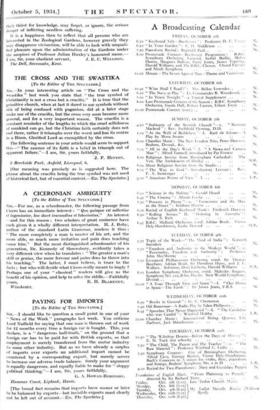 THE CROSS AND THE SWASTIKA

[To the Editor of THE SPECTATOR.] Sns,-In your interesting - article on " The Cross and the Swastika " last week you state that " the true symbol of Christianity is not a cross but a crucifix." It is true that the primitive church, when at last it dared to use symbols without risk of being confused with paganism, did at a later stage make use of the crucifix, but the cross very soon became more general, and for a very important reason. The crucifix is a constant reminder of the lengths to which the cruel selfishness of mankind can go, but the Christian faith certainly does not end there, rather it triumphs over the worst and has its centre in a Risen, Glorified Lord as exemplified by the cross.

The following sentence in your article would seem to support this-" The essence of its faith is a belief in triumph out of apparent failure."-I am, Sir, yours faithfully,

[Our meaning was precisely as is suggested here. The phrase about the crucifix being the true symbol was not used of historical fact, but of essential content. -ED. The Spectator.]