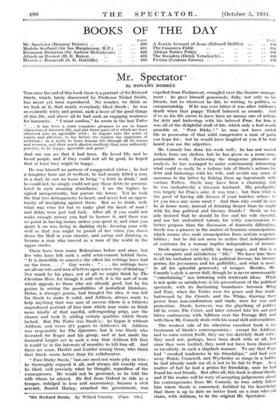 TOWARDS the end of this book there is a portrait of Sir Richard Steele, which, lately discovered by Professor Nichol Smith, has never yet been reproduced. No wonder, we think as

we look at it, that nearly everybody liked Steele ; he was so evidently witty and genial, such a lover of the good things

of this life, and above all he had such an engaging weakness for humanity. " I must confess," he wrote in the last Tatter " . . . it has been a most exquisite pleasure to me to frame characters of domestic life, and put those parts of it which are least observed into an agreeable view ; to inquire into the seeds of vanity and affection, to lay before the readers the emptiness of ambition : in a word, to trace human life through all its mazes and recesses, and show much shorter methods than men ordinarily practise, to be happy, agreeable and great."

And one can see that it had been. He loved life, and he loved people, and if they could not all be good, he hoped that at least they might be happy.

He was himself no pattern of exaggerated virtue ; he had a daughter born out of wedlock, he had nearly killed a man

in a duel, he saw no harm in being " a little in drink," and lie could not, he simply could not pay those debts he accumu- lated in such amazing abundance. I see the higher, lie sighed unrepentantly, but pursue the lower. Yet he took the first two delinquencies to heart, and never lost an oppor- tunity of inveighing against them. But as to drink, well, what was wine for but to make glad the heart of man ?

and debts were just bad luck. After all, if you could not make enough money you had to borrow it, and there was no point in having money unless you spent it, and what you spent it on was living in dashing style, dressing your wife

well so that you might be proud of her when you drove down the Mall in your chariot, and eating and drinking as

became a man who moved as a man of the world in the upper circles.

There have been many Bohemians before and since, but few who have left such a solid- achievement behind them.

set all our wits and men of letters upon a new way of thinking." Not much by his plays, not at all we might think by The Christian Hero, for though it sold well, it is the sort of work which appeals to those who are already good, but by his genius in seizing the - possibilities of periodical literature. Defoe, a stronger genius, had bungled the idea, it was left for Steele to Make it valid, and Addison, always ready to help anything that was sure of success (there is a hitherto unproduced portrait of him here which may make us think more kindlY 'of that careful, self-regarding prig), saw the chance and 'took it, adding' certain qualities which Steele lacked. But The Taller was Steele's: he began it without Addison, and wrote 271 papers to Addison'S 42. Addison ; was responsible for 'The Spectator,-but it was Steele who invented Sir Roger and his _group, and, at last, Made the immortal knight act in such . a way that Addison_ felt that it would be in the interests of morality to kill him off; And there are some, Hazlitt and taiidor-amorig them; WhO think that Steele wrote better than his collaborator.

i " Poor Dicky Steele," but.one need not waste pity on him ; he thoroughly enjoyed it and 'always did exactly what he liked, said precisely what' he' thikight; regardless -4 the consequences. He would .not be governed, as he told as -wife whom he adored. He fled from Oxford to ride as a trooper, indulged in love and necromancy, • became -a civil servant, flouted Harley, attacked the -gOvernment, was *Sir Richard Steele. By Willard Connely. (Cape. 15s.) expelled from Parliament, wrangled over the theatre manage. ment : he gave himself generously, fully, not only to his friends, but to whatever he did, to writing, to politics,. to companionship. If he was ever bitter it was after Addison's death when that puppy Tickell behaved so meanly. And if to us his life seems to have been an uneasy-one of actions for debt and bickerings with his beloved Prue, for him it was all of the delightful stuff of life, which only a fool would grumble at. Poor Dicky I " he may not have ended life in- possession of that solid competence a man of parts can hope for.; but he would have laughed at you if he had heard you use the adjective.

Mr. Connely has done his work well ; he has not ousted Aitken from our shelves, but 'he has given us a more com- panionable work. '''Eschewing the dangerous pleasures of analysis, he has managed to make continuously interesting what could so easily be a tedious tale of Steele's actions for debt and bickerings with his wife, and avoids any sense of sameness in the latter by linking them up ingeniously with Various Tatters. Steele may have been a charming, but he was undoubtedly a tiresome husband. His prodigality was largely for Prue's sake, it was true.; but then what is the good -of having silk dresses if your -butcher -refuses to let you have any more meat ? And then why could he not be at home more, instead of drinking deeper than he ought with his fine political and literary friends ? Steele on his side insisted that he should be free and his wife cheerful, and use her undoubted talents for witty conversation to better purpose than the discussion of domestic difficulties. Steele was a pioneer in the matter of feminine emancipation, which means also male emancipation from certain responsi- bilities ; but he did not seem to realize that independence of existence for a woman implies independence of income.

Steele emerges very solidly in these pages, and this is a very complete and satisfactory " life." We have him there in all his turbulent activity, his political fervour, his literary genius, 'his joyousness and his gullibility, and -what is more, in all his splendid generosity of temper. Besides, Mr. Connely's style is never dull, though he is never unnecessarily '" entertaining," nor irritating with irrelevant ideas. What is not quite so satisfactory is his presentment of the political spectacle, with its fluctuating boundaries between Whig and Tory, when the Tories were for peace and free trade, buttressed by the Church, and the Whigs, drawing their power from 'non-conformism and trade; were for war and protection. Steele, however, was the plaything of politics till he wrote' The Crisis, and later entered into his sad and bitter controversy with Addison over 'the Peerage Bill, and with these Mr. Connely deals with his usual skill and erudition.

The weakest side of his otherwise excellent book is his 'treatment of Steele's contemporaries ; except for AddiSon, and to some extent Swift, they are too sketchily- dealt with : they need not, perhaps, have been dealt With at. all, but since they were tackled, they need not have been dismissed so cavalierly, in such a slapdash manner. To say that Pope had " crooked tendencies in his friendships," and had cast ' away Walsh,' Cromwell, and Wyclierley as rungs in a ladder he had already made use of, is not to be fair to Pope. As a matter of fact he had a genius for friendship, once he had found his real friends. But after all, this-book is about-Steele, and if the reader will be wary of accepting judgements about his contemporaries from Mr. Connely, he may safely follow him where Steele is concerned, fortified by the knowledge that there is up to date no better book on a man who can claim, with 'Addison; to be the original Mr. Spectator.