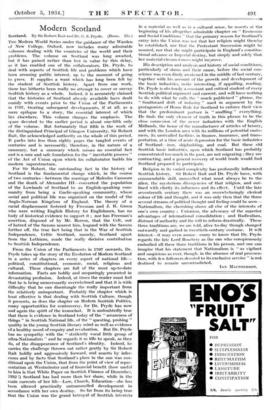 Scotland. By Sir Robert Rait and Dr. G. S. Pryde. (Bann. 21s.) THE Modern World Series under the guidance of the Warden of New College, Oxford, now includes many admirable volumes dealing with the countries of the world and their problems. The volume on Scotland was king awaited, but it has gained rather than lost in value by this delay, as it has enabled one of the collaborators, Dr. Pryde, to deal with aspects of Scottish life and problems which have been arousing public interest, up to the moment of going to press. It supplies a want which has long been felt by the student of Scottish history. Apart from one work, there has hitherto been really no attempt to cover or survey Scottish history as a whole. Indeed, it is accurately claimed that the histories of Scotland already available have dealt mainly with events prior to the Union of the Parliaments in 1707, treating subsequent developments, if at all, as a mere epilogue to a story, the essential interest of which lies elsewhere. This volume changes the emphasis. The space devoted to the earlier period is about one-fifth only of the volume. But fortunately that fifth is the work of the distinguished Principal of Glasgow University, Sir. Robert Rait, the acknowledged authority on the whole of this period. It packs into less than eighty pages the tangled events of centuries and is necessarily, therefore, in the nature of a summary, but a summary which misses no essential fact and is a sure and safe foundation for the inevitable process " of the Act of Union upon which his collaborator builds his modern superstructure.

For Sir Robert, the outstanding fact in the history of Scotland is the fundamental change which, in the course of two centuries—between the marriage of Malcolm Canmore and the death of Alexander HI—converted the population of the Lowlands of Scotland to an English-speaking com- munity from being a Gaelic-speaking community, whose social and political life was organized on the model of the Anglo-Norman Kingdom of England. The theory of a racial displacement fostered by Freeman and J. R. Green who were writing English History for Englishmen, has no body of historical evidence to support it ; nor has Freeman's assertion, disposed of by Mr. Barron, that the Celt, out of hatred of the Saxons nearest him, leagued with the Saxons further off, the true fact being that in the War of Scottish Independence, Celtic Scotland, namely, Scotland apart from the' Lothians, made the really decisive contribution to Scottish Independence.

From the Union of the Parliaments in 1707 onwards, Dr. Pryde takes up the story of the Evolution of Modern Scotland in a series of chapters on every aspect of national life— political, constitutional, economic, social, religious and cultural. These chapters are full of the most up-to-date information. Facts are boldly and unsparingly presented in devastating profusion. Indeed, at times the reader must feel that he is being unnecessarily overwhelmed and that it is with difficulty that he can disentangle the really important from the relatively unimportant. Probably the chapter which is least effective is that dealing with Scottish Culture, though it presents, as does the chapter on Modem Scottish Politics, many opportunities for controversy, for Dr. Pryde has now and again the spirit of the iconoclast. It is undoubtedly true that there is evidence in Scotland today of the " awareness of things " in Scottish National life, of the " questing, probing " quality in the young Scottish literary mind as well as evidence of a healthy mood of enquiry and revaluation. But Dr. Pryde has no sympathy with the " stridently vocal little group of ultra-Nationalists " and he regards it as idle to speak, as they do, of the disappearance of Scotland's identity. Indeed, he carries the challenge thrown out rather gently by Sir Robert Rait boldly and aggressively forward, and asserts by infer- ences and by facts that Scotland's place in the sun was con- ditional upon the Union, that from the point of view of repre- sentation at Westminster and of financial benefit (how useful to him is that White Paper on Scottish Finance of December, 1932 !) Scotland has had more than her share, while in the main currents of her life—Law, Church, Education—she has been allowed practically untrammelled development in accordance with her own destiny. So far from its being true that the Union was the grand betrayal of Scottish interests in a material as well as in a cultural sense, he asserts at the beginning of his altogether admirable chapter on " Economic and Social Conditions " that the primary reason for Scotland's entry into the Union was not that her religion might thereby be established, nor that the Protestant Succession might be assured, nor that she might participate in England's constitu- tional advance or Imperial destiny, but simply and solely that her material eireumitanees might improve.

His description and analysis and history of social conditions; particularly of slums and their cause, before the social con- science was even dimly awakened in the middle of last century, together with his account of the growth and development of the basic industries, make interesting, if appalling, reading. Dr. Pryde is obviously a constant and critical student of every Scottish political argument and current, and will have nothing to do with what he calls the much pu,blicized " phrase, the " Southward drift of industry " used in argument by the protagonists of Home Rule for Scotland to enforce their view that the predominant partner is " snaffling " everything. He finds the only element of truth in this phrase to be the close connexion of the newer industries with the English Midlands, the home of the manufacturer of articles of luxury, and with the London area with its millions of potential custo- mers, its unrivalled facilities in finance, insurance, and trans- portation, at a time of acute depression for the basic industries of Scotland—iron, shipbuilding, and coal. But these old Scottish basic industries, upon which Scotland has probably concentrated too much in the past, are not migrating ; they are contracting, and a general recovery of world trade would find Scotland prepared to participate.

Religion in its varied complexity has profoundly influenced Scottish history. Sir Robert Reit and Dr. Pryde have, with commendable skill, unravelled what must always be to the alien, the mysterious divergencies of that religion, and out- lined with clarity its influences and its effect. Until the late seventeenth century there was an overwhelmingly clerical colour of life and thought, and it was only then that the three several streams of political thought and feeling could be seen— Nationalism, the cherishing above all else of the interests of one's own country ; Unionism, the advocacy of the superior advantages of international consolidation ; and Radicalism, distrust of authority and the will to reform drastically. These three traditions are, we are told, alive to-day though changed outwardly and garbed in twentieth-century costume. It will interest—it may even amuse—many to know that Dr. Pryde regards the late Lord Rosebery as the one who conspicuously embodied all these three traditions in his person, and one can imagine that his statement that Nationalism is " as vigilant and suspicious as ever, though, in the absence of real provoca- tion, with few followers devoted to its exclusive service " is not destined to remain uncontradieted.