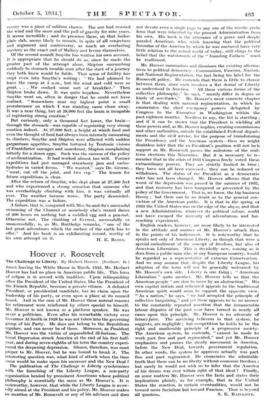 The Challenge to Liberty. By Herbert Hoover. (Scribner. 6s.)

SINCE leaving the White House in March, 1933, Mr. Herbert Hoover has had no place in American public life. This form of eclipse is in accord with tradition. Upon relinquishing office the President of the United States, like the President of the French Republic, becomes a private citizen. A defeated President, or presidential candidate, has no claim upon the leadership of his party, or even upon a place at its council board. And in the case of Mr. Hoover these normal reasons for retirement were reinforced by others special to himself. Mr. Hoover is not known as a platform speaker. He was never a politician. Even after his remarkable victory over Governor Al Smith in 1928 he was not taken into the governing group of his Party. He does not belong to the Republican regulars, and can never be of them. Moreover, as President Mr. Hoover was the victim of unparalleled ill-fortune. The Great Depression struck. America at the end of his first half- year, and during seven-eighths of his term the country experi- enced the deepening depression. Silence, therefore, was most proper to Mr. Hoover, but he was bound to break it. The interesting question was, what kind of attack when the time came would he make upon his successor and the New Deal ?

The publication of The Challenge to Liberty synchronizes with the launching of the Liberty League, a non-party organization headed by prominent Americans whose political Philosophy is essentially the same as Mr. Hoover's. It is noteworthy, however, that while the Liberty League is avow- edly aimed at the President and his policy, Mr. Hoover makes no mention of Mr. Roosevelt or any of his advisers and does not devote even a single page to any one of the terrific pro's- lems that were inherited by the present Administration from his own. His book is the utterance of a grave and deeply puzzled American, who, while knowing that the political formulae of the America by which he was nurtured have very little relation to the actual world of taday, still clings to the belief that the watchwords of the " founding Fathers " must be reaffirmed.

Mr. Hoover summarizes and dismisses the existing alterna- tives to political democracy--Communism, Fascism, Nazism, and National Regimentation, the last being his label for the Roosevelt policy. He contends that there is little to choose between them, since each involves a flat denial of Liberty as understood in America. " AU these various forms of the collective philosophy," he says, " merely differ in degree or kinds of servitudes." Mr. Hoover's most concrete chapter is that dealing with national regimentation, in which he enumerates the chief ear!rgeney powers delegated by Congress to the Executive in Washington within the past eighteen months. Needless to say, the list is startling ; and if it can be shown that the President is wielding all these powers and, as Mr. Hoover implies, creating commissions and other authorities, outside the established Federal depart- ments and the civil service, for the purpose of transforming the Presidency and the American system—then we might doubtless infer that the ex-President's position will not lack support as Mr. Roosevelt passes the milestone of the mid- term elections this November. But it is necessary to re- member that in the crisis of 1933 Congress freely voted these extraordinary powers. They are strictly limited in time ; they have not all been exercised ; they can be reduced or withdrawn. The status of the President as a democratic ruler has not been changed. Mr. Hoover affirms that the worst of the depression was passed in the summer of 1932, and that recovery has been hampered or prevented by the policy of the Government. That is, we know, the big-business theory ; but there can be no doubt as to the general con- viction of the American public. It is that in the spring of 1933 the United States was on the edge of the abyss, and that a new Administration, whatever its political colour, could not have escaped the necessity of adventurous and far- reaching experiment.

English readers, however. are more likely to be interested in the attitude and manner of Mr. Hoover's attack than in the points of his indictment. It is noteworthy that he speaks not only of American Liberty, as though that were a special embodiment of the concept of freedom, but also of American Liberalism. This is decidedly new, coining as it does from a public man who, in any European country, would be regarded as a representative of extreme Conservatism. And we may assume that, despite the Liberty League, his adoption of the term will not be generally welcomed by Mr. Hoover's own side. Liberty is one thing ; " American Liberalism " quite another. Mr. Hoover tells us that the American people are slow to move by an abstraction." His own capital initials and reiterated appeals to the traditional American spirit would seem to support the opposite view. "As a nation," he says, " we had accepted the principle of collective bargaining," and yet there appears to be no answer to the constantly repeated assertion that the innumerable labour disputes of the past year have turned in nearly all cases upon this principle. Mr. Hoover is no advocate of laissez-faire. The surviving believers in that system, he suggests, are negligible ; but competition he holds to be the right and unalterable principle of a progressive society- The American system, he contends, " cannot be made to work part free and part regimented," and yet Mr. Hoover emphasizes and praises the steady movement in America, before the New Deal, towards government regulation. In other words, the system he approves actually was part free and part regimented. He enunciates the admirable truth that there can be no liberty without economic freedom ; but surely he would not wish us to infer that the America of his dream was ever within sight of that ideal ? Finally, on some matters Mr. Hoover sees the facts and states their implications plainly, as for example, that in the United States the reaction, in certain eventualities, would not be toward more Socialism but toward Fascism. That is beyond