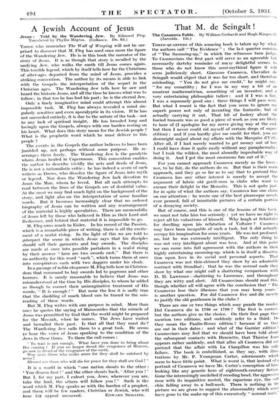 The Casanova Fable. By William Gerhardi and Hugh Kingsmill • (Jarrolds.

15s.) THREE-QUARTERS of this amusing book is taken up by what the authors call " The Evidence " ; the last quarter consist, of " The Summing-up," in which the . witnesses turn judge.

To Casanovians the first part will serve as an agreeable but necessarily sketchy reminder of ma ay. delightful scenes, to

those who do not know this semi-mythical figure it will seem judiciously short. Giacomo Casanova, Chevalier de Seingalt would object that it was far too short, and therefore misleading. " You do not give me credit," he might say, "Tor my versatility ; for I was in my way a bit of an amateur mathematician, something of an inventor, and a very entertaining philosophic talker ; and if I was a liar, I was a supremely good one ; these things I will pass over.

But what I resent is the fact that you seem to ignore my superb power not only of inventing the fantastic, but of

actually carrying it out. That bit of foolery about the buried treasure was as good a piece of work as you are likely to hear of (I apologize for my nerve giving way at the end, but then I never could rid myself of certain dregs of super- stition) : and if you hardly give me credit for that, you are downright unjust about my affairs with the Marquise d'Urfe. After all, if I had merely wanted to get money out of her. I could have done it quite easily without any paraphernalia : but I took the wildest, the most absurdly improbable way of doing it. And I' got the most enormous fun out of it."

For you cannot approach Casanova merely as the lover nor, to be fair, do the authors do so. But that is their main approach, and they go so far as to say that to pretend that Casanova has any other interest is merely to accept the argument of lubric old gentlemen in clubs who want to excuse their delight in the Memoirs. This is not quite just.

for in spite of what the authors say, Casanova has one claim on our attention : he wrote one of the best picaresque novels ever penned, full of inimitable pictures of a certain portion of a decaying society. •

But of course, and this is one of the lessons of this book. we must not take him too seriously : yet we have no right to

reject all his valuations of himself. Why laugh at Schnitzler for dwelling upon his refutation of Voltaire ? Casanova may have been incapable of such a task, but it did actually occupy his imagination for some years. He was not profound.

no, but he was extremely intelligent. The only thing he was not very intelligent about was love. And at this point we can come into full agreement with the authors in their highly entertaining summing-up, which is in itself a disserta- tion upon love in its social and personal aspects. That

Casanova was not thin-skinned they show by an admirable

contrast with Stendhal ; that he was the normal male they show by what one might call a shattering comparison with

D. H. Lawrence—shattering to Lawrence, and throughout

they are witty and alert. All Casanovians should read this. though whether all will agree with the conclusion that The Casanovas lose their illusions that you may keep yours - is another question. For did Casanova live and die merely to justify the old gentlemen in the clubs ?

There are one or two things which may puzzle the reader. Did Casanova die in 1798 or 1799 ? The first is correct.

but the authors give us the choice. On their first page they

mention two editions, and suddenly refer to a third. Do they mean the Paulin-Rosez edition ? because if so they are out in their dates : and what of the Gamier edition ?

Casanovians may feel that we should have been told about the subsequent contacts with Henriette, that Therese Imer

• appears rather suddenly, and that after all Casanova did not pretend that the affair with La Charpillon was his only failure. The book is embellished, as they say, with illus-

trations by Mr. P. Youngman Carter, adornments which seem to have little point. What is worst is, that instead of a

portrait of Casanova we have Mr. Carter's conception of hint - looking like any generic hero of eighteenth-century fiction. Gone the interestingly modelled if receding head, the aggressive

nose with its inquisitive nostril, the rapacious eye, the soft - chin falling away to a bull-neck. -There is nothing in the picture we are given to suggest the abnormality which must have gone to the make-up of this excessively. " normal male."