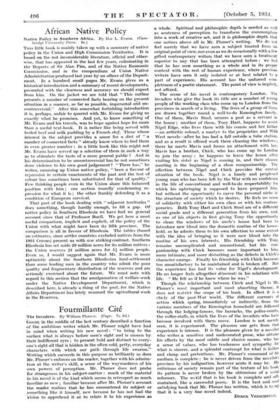 This little book is mainly taken up with a summary of native policy in the Union and High Commission Territories. It is based on the not inconsiderable literature, official and other- wise, that has appeared in the last few years, culminating in the Reports of Sir Alan Pkn, and of the Native Economic Commission, and in the compendium of Union Native Administration produced last year by an officer of the Depart- ment. In a hundred small pages Mr. Evans gives us a historical introduction and a summary of recent developments, presented with the clearness and accuracy we should expect from him. On the jacket we are told that " This outline presents a number of connected facts bearing on the present situation in a manner, as far as possible, impersonal and un- controversial." After this somewhat forbidding introduction it is, perhaps, unfair to quarrel with Mr. Evans for giving us exactly what he promises. And yet, to know something of Mr. Evans and his travels, was to hope against hope for more than a useful text-book. It is rather like being served with boiled beef and milk pudding by a French chef. Those whose interest in the subject proVides a sauce for a diet of " a number of connected facts " already know where to find them in even greater number : in a little book like this might not • Mr. Evans have served up a selection of them in such a way us to stimulate the taste of a more general public.? And in his determination to be uncontroversial has he not sometimes done violence to his own good judgement? "There has," he writes, summing up Union native policy, " been a flavour of repression in certain enactments of the past and the test of colour has sometimes been substituted for that of quality." Few thinking people even in the Union share this balanced position with him ; one section roundly condemning re- pression for what it is ; the other frankly defending it as a condition of European survival.

That part of the book dealing with " adjacent territories " does something, though hardly enough, to fill a gap. Of native policy in Southern Rhodesia we have had no general account since that of Professor Buell. We get here a most useful comparison, implicit and explicit, of the policy of the Union with what might have been its fifth province. The comparison is all in favour of Rhodesia. The tables (based On estimates, since settler countries excluded natives from the 1931 Census) present us with one striking contrast. Southern Rhodesia has set aside 29 million acres for its million natives : the Union reserves 21 million acres for 51 million people. Even so, I would suggest again that Mr. Evans is more optimistic about the Southern Rhodesian land-settlement than some leading men in the country who admit the poor quality and fragmentary distribution of the reserves and are seriously exercised about the future. We must note with regard to this section that the amalgamation of welfare-work under the Native Development Department, which is described here, is already a thing of the past, for the Native Minks Department has lately resumed the agricultural work in the Reserves.