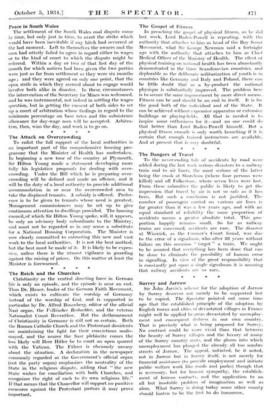 Page 3, 5 October 1934 — The Reich and the Churches Christianity as the central directing
Close

The Reich and the Churches Christianity as the central directing

force in German life is only an episode, and the episode is near an end. Thus Dr. Hauer, leader of the German Faith Movement, which exists to cultivate the worship of Germany instead of the worship of God, and is supported in particular by Dr. Alfred Rosenberg, editor of the official Nazi organ, the Valcischer Beobachter, and the veteran Nationalist Count Reventlow. But the dethronement of Christianity in Germany is still not so certain. Both the Roman Catholic Church and the Protestant dissidents are maintaining the fight for their convictions undis- mayed, and the nearer the Saar plebiscite comes the less likely will Herr Hitler be to court an open quarrel with the Vatican. The Fithrer is obviously uneasy about the situation. A declaration in the newspaper commonly regarded as the Government's official organ (not the party organ) emphasizes the neutrality of the State in the religious dispute, adding that " the new State wishes for conciliation with both Churches, and recognizes the right of each to its own religious life." If that means that the Chancellor will support no punitive measures against the Protestant pastors it may prove important.